Brother From Another Mother 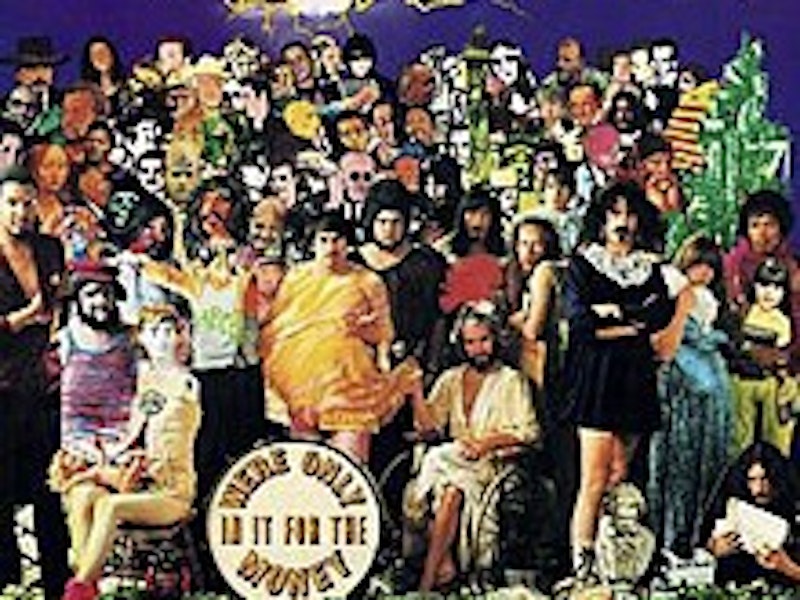 It was recently announced that Frank Zappa will tour again a quarter century after his death. They're pulling video footage from the 1970s out of mothballs. Blowing off the dust and cranking up the hype machine to create a holographic concert extravaganza. Starring Zappa as the back-from-the dead hologram accompanied by a still living band of musicians who performed in previous incarnations of The Mothers of Invention and beyond.

Zappa's oldest son Dweezil has toured for years after his father’s death with the Zappa does Zappa concerts. Now with the legal battles brewing past and present, Dweezil no longer sells FZ related merch and had to change the name of his concert show, now called “Dweezil Zappa Plays Whatever the &$?!"@#% He Wants.” Youngest son Ahmet Zappa, who’s also executor of The Zappa Family Trust, has created even more contention with the new Bizarre World of Frank Zappa Holographic Concert tour.

News reports say the tour has torn the siblings apart. Bad blood is bubbling. Ahmet and his little sister Diva are in a family drama conflict with elders Dweezil and older sister Moon Unit. A legal limbo stalemate in the family is nothing new. When money comes in the door families fly out the window. Squabbles over rights to grandma's fur coat or daddy's millions are normal.

Litigation is the American way for wholesome family values. Airing out the family’s dirty underwear is also the American standard. Of course, for me Frank Zappa was anything but American. He was a bandleader, composer, musician, family man and sometimes even a businessman but was never a commercially viable patriot. His late wife Gail's marketing savvy helped rake in a fortune after the fact too. It's always about the money, ain't it?

I'm not the diehard fan I was in my youth. I still indulge in marathon listening parties of Zappa and the Mothers on those infrequent benders until I fall out. My enthusiasm has stayed the course on the accumulated layer of lacquered years. I can still listen to entire albums and love each one as much as the next. Burnt Weeny Sandwich, Hot Rats, Waka Jawaka, Uncle Meat, Weasels Ripped My Flesh and Lumpy Gravy among many others are on my Zappa rotation set list when the spirits move me.

Zappabilia abounds for public consumption. There's so much that trying to put it all in perspective in this limited format is impossible. The music of The Mothers of Invention had a personal and cathartic effect on my tender psyche. Stamping me forever with the No. 1 Freak seal of approval. I'm still pretty freaky even by today's standards of freakiness. To be weird is one thing but to be freaky is quite another kookycreature. In a coordinate combo, a wired weirdo freak would sum it up fairly accurately.

I was Zappafied, drifting in a world of bizarreness and rarified soundscape hallucinations some call drug-induced interludes of psychedelic madness. An ultimate freakout of notes and sounds in a loony tune echo chamber fueled exclusively on teen testosterone, underground comics and rock ‘n’ roll. Suited up in a way out costume of classical gassy soup and well-orchestrated mind fuck. Some say it's music. Ladies and germs, that's the Mothers. A lifelong love of Invention.

It doesn't matter that in 1979 Frank Zappa was booked in a last-minute attempt to fill in as a substitute for Keith Richards, who was originally slated to recite The Talking Asshole, an excerpt taken from the novel Naked Lunch by William Burroughs. Richards had to cancel because of legal problems involving heroin in Toronto. It's of little consequence that a young Patti Smith had a hissy fit because she had to follow Zappa. Who knows? I wasn't there.

The Zappaesque movie spectacle 200 Motels was an ill-fated big screen release. Not the average rock opera debut in 1971. It's as obscure now as it was an unknown classic then. A strange appearance of Ringo Starr as a Zappa lookalike looking eerily similar. An oddly-placed Theodore Bikel and the cast of Mothers of Invention with Flo & Eddie, original members of The Turtles. Even a cameo from Who drummer Keith Moon.

It all sounds like make believe. Like speaking out against Tipper Gore’s PMRC (Parents Music Resource Center) censorship agenda as an advocate for free speech and the rights of songwriters. Some called the anti-profanity the Mothers of Prevention. Frank Zappa could be a difficult non-social diva at times.

While some bickered over the merit of Rolling Stones vs. Beatles, at another end of the rock ‘n’ roll circus it was the Velvet Underground vs. The Mothers of Invention. It's debatable that both bands were out there having fun in the warm California sun or brooding in the dark gray cement canyons of Manhattan. Andy Warhol had a definite disdain for what he said was Zappa's meanness toward Lou Reed, publicly insulting the Velvet Underground. As an intro he announced, "This band really sucks."

Zappa was a mega power and didn’t want to share his freak crown with Lou Reed or anybody else. He gave us the gift of decades of incredible music and art. Plus a wicked sense of humor. He introduced us to amazing artists like Captain Beefheart.

He produced the all-girl rock band The GTO’s. He even laid Wild Man Fischer on an unsuspecting counterculture. He did it all. Now his kids, who should know better, want to introduce us to the world of a holographic Frank Zappa back from the dead live in concert. I’ll pass on that gig.