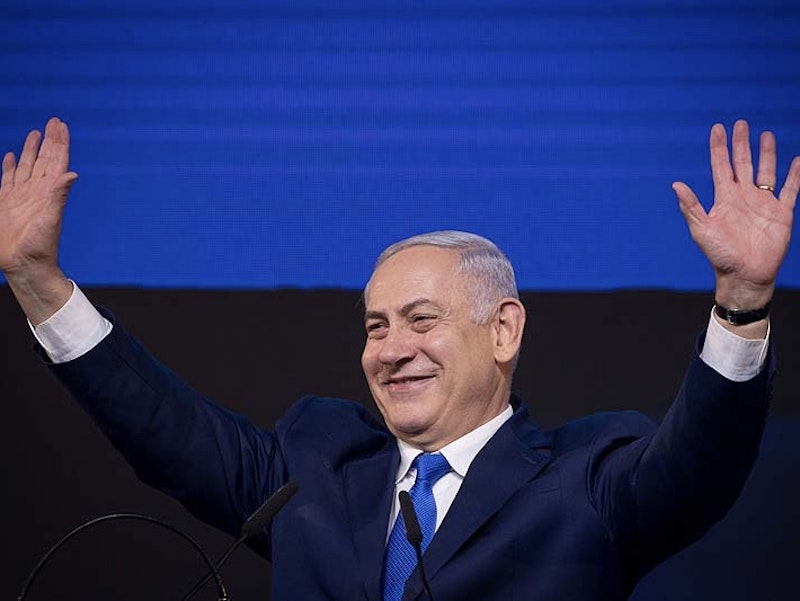 The Israelis have voted, reconfirming their country’s shift to a hardline nationalism. A nice effect of this is that they’re deepening the pool of rhetorical possibility for those of us on the paleoconservative hard right—for us White Creeps, as we love to call ourselves, appropriating the language of our liberal oppressors.

It’s a perfect situation for us. In the wake of Netanyahu’s reelection and the total eclipse of anything like a political left in the Jewish homeland, we’ll still be able to cite Israel as the sort of confident, if excessively militarized (we paleocons are against all manifestations of militarism, including the draft), nation-state that bravely maintains its cultural, ethnic, and religious identity, guarding its borders and offering no apologies or self-justifications to a depraved liberalism.

On the other hand, when we find it politically convenient—for example, when we want to abuse the neoconservatives and mainstream Democrats who remain loyal to Zionism—we’ll be able with that much more justice to malign the Israel that they revere. It will be even easier for us to call it an apartheid Nazi state, second only to the likes of, say, anti-Russian Estonia inevil fascist depravity.

What a fine gift from the Jews this development is! Of course, the Jew always has played a multivalent role for us White Creeps. Now he’s a communist, now he’s an arch-capitalist with cigar and top hat, now he’s a rootless cosmopolitan, now he’s a William Kristol-style Americanist jingo. How useful.

Not that we White Creeps who take pen in hand for fun and profit should apologize for using the protean figure of the Jew for our own polemical goals. We are, after all, not only involved in ideological battle. We’re also artists of a sort. Furnish us with brush, paint, and canvas, and we will paint.

I rarely suggest reading material in this space, probably because I consider this space to be my space, where my voice should reign in supreme isolation. That said, there are a few items out there I’d like to direct to the attention of the reader.

Here is a fine interview from 1959 with T.S. Eliot in which the aging master glows with the content that he acquired as he grew older, largely as a result of his solid second marriage. Here is a compelling article about the “radical” Russell Kirk. Radical in the sense that his thought rebukes today’s “conservatism,” with its libertarianism, its “creative destruction,” its worship of the market.

I’d like to see more from this article’s young author, a certain Michael Warren Davis. The fact that he’s publishing in The American Conservative redeems that magazine, which recently has seemed reduced—less a home for geniuses like Taki and Yale professor Dr. Daniel Larison, the world-famous Russian Orthodox theologian, and more a vehicle for the likes of Rod Dreher, still perfecting his hysterical register of cultural declinism. (Some pessimism is appropriate for the true conservative, but Dreher takes the tendency into the realm of the apocalyptic, sobbingly soiling himself in response to every obscene fillip of the left. Control yourself, sir.)

I have one small objection to Davis’ fine essay on Kirk, and it has to do with his mentioning, in passing, that Russia today is a “half-Stalinist/half-Orthodox nation.”

So it is. Davis is correct, and his formulation is an astute one. But I object to the tone of that characterization, which seems to me negative. The truth is that the division of the Russian soul between Stalinism and Russian Orthodoxy is the great strength of Russia. It’s what makes it the greatest of the world’s nations, and what will make it the literal superpower, as well as the “moral superpower,” of the second half of the 21st century and beyond.

This is a big topic, and one for another essay (or book). I will add here, though, that the distaste for Stalinism even among those of us paleocons who worship Russia the most is misguided, and wrong from a historical perspective. It’s time for a paleocon intellectual project to rehabilitate Stalinism. This project would posit it as nothing more or less than the 20th century version of the holy institution of Tsarism, just as Putinism is the contemporary version of it.

We must not shrink from the stern intellectual challenge of Stalin, the GLORIOUS RED TSAR who smote the fractious lesser nations of the Russian empire in order to bend them to the will of the MIGHTY KREMLIN. We rather must meditate on what he has to teach us today.