So what if my cousin smoked in Notre Dame? Everyone smokes in Paris. 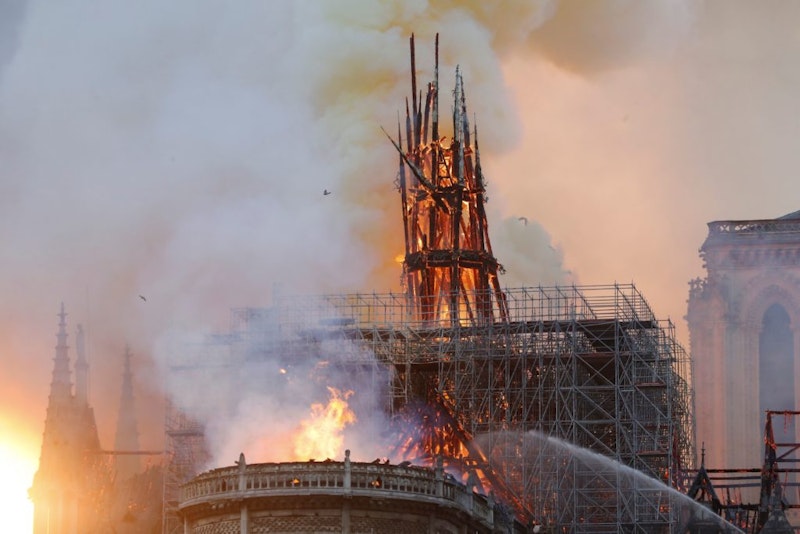 “Look, I’m sorry. If there was no smoking allowed in the cathedral, they should’ve put a sign up.” Those were the first words I read early yesterday afternoon upon waking from an unexpected 12-hour nap at my writing desk. I’d left the Twitter website open overnight, and now, in the blistering spring light, my cousin Bennington’s tacit admission of guilt was shared, liked, retweeted, replied, and eventually ratioed. Before I could look away the phone started ringing, and then the thunderclaps came in, and then even still more knocks at my door. I haven’t made up my mind yet whether or not those knocks have been cognitive distortions of my own self, or indeed paparazzi looking to snag a snap of the most infamous and reclusive avian author alive—indeed, I am the animal kingdom’s Greta Garbo. But I digress.

I didn’t go to the door. I shut the blinds and closed the windows in my herb room and laid down for my daily siesta, the torrential rainfall leaking into my barn and the howling wind a fitting soundtrack to my twisted mind. Nevertheless I couldn’t fall asleep—why would my cousin admit to such an offense, and on Twitter no less? It’s a crime that Jack Dorsey ever let any humans on the Twitter website, because when it was just birds, we had a utopia of our own.

I remember being part of beta-testing in 2005 or 2006, and the depth of the comments—or “tweets” as they would be so insultingly christened later on—never went beyond “Just ate some seed, yummy :)” or “watch out for hunters in Cambridge” or “my cloaca is burning and I don’t know why.” You know, totally innocent stuff, pure fluff, no opinions or comments of substance. But now everyone on the Twitter website has to comport and contort themselves in the ways of a politician—and I think about this (to quote one of the few humans I like on the Twitter website, Mme. Emster, otherwise known as @whorevidal).

My friends only text me when my wife, cousin or I’ve done something bad. Some “friends” you might say. And you’d be right, they’re all fake as hell, and I think about this. Among them was my literary agent (my acting agent was characteristically silent), who insisted I draft a statement of condemnation and disgust aimed at Bennington to be published in parts on the Twitter website. I cackled when he finally called me, his voice quivering as if he were on the verge of tears, begging me to come up with something to distance myself from Bennington.

I told him to take a Valium break and to lay off the micro-dosing, which by the way, is a highly overrated practice. Everyone I know that “micro-doses” isn’t even on LSD, they just snort Adderall and put up Alex Grey posters to throw people off the scent. Then my agent was actually crying, and then I heard cars, lots of honking—he was about to jump off the Golden Gate Bridge. I didn’t know this, but even if I had, I still would’ve fired him simply for disrespecting my family’s rigid code of ethics. His body hasn’t been found, but his phone is still on. How many others could he be misrepresenting and ripping off while at the bottom of the Bay? Those fish wouldn’t touch him, oily as he is (or was). And I think about this.

Even if my cousin did cause the fire at Notre Dame, I don’t think he should be held responsible. It’s fucking France—people smoke cigarettes! Birds too, but you wouldn’t know that reading the anthrocentric media that still dominates our discourse. Monica and I may go for a sojourn one day to see what remains of the cathedral, but we certainly won’t be giving any money, as if the Catholic Church is hurting for some. No, we’d rather go to the Wailing Wall and leave vulgar messages in the cracks. Like I said, we have fun. And yes, I think about this, too.