Pulp Nonfiction: Was Quarry’s Blood Inspired by My Life?

It’s speculation, but there are some notable parallels. 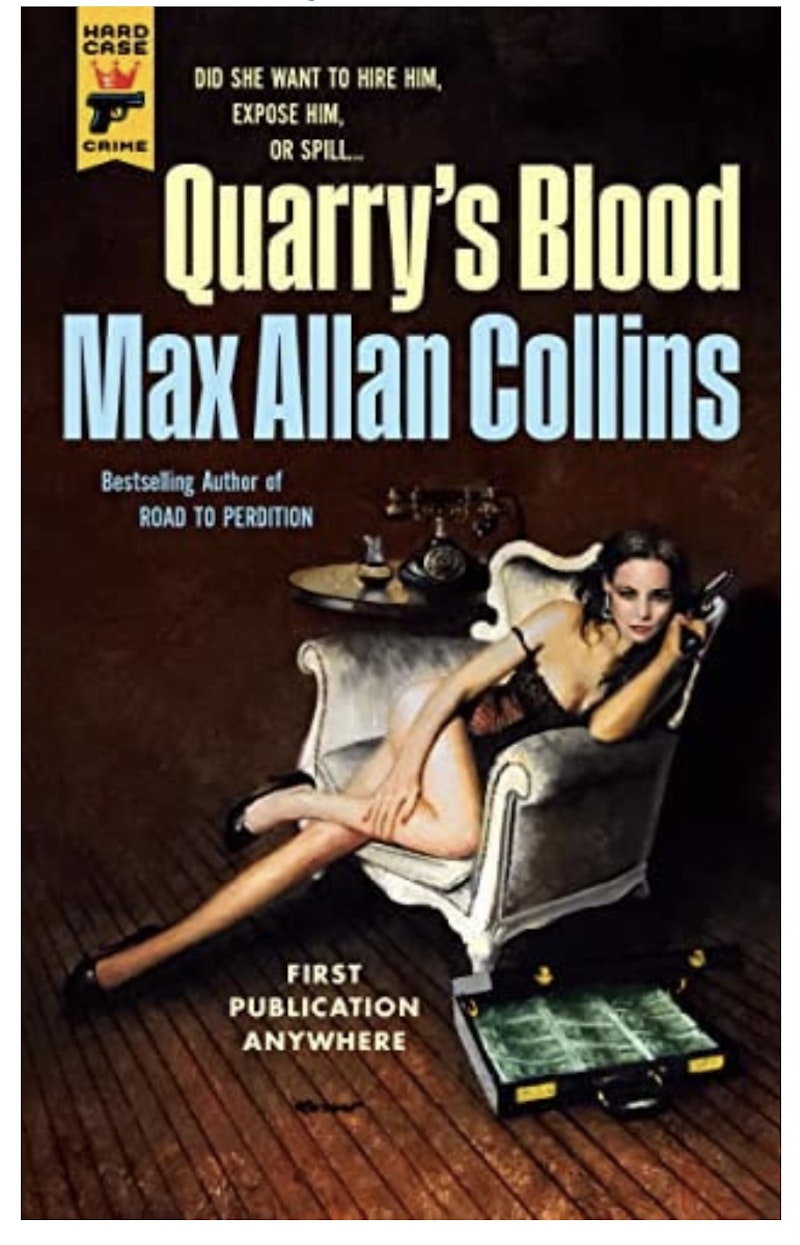 “The reality of having two corpses on my hands overwhelmed me—I’d had my old life hurled at me into this new one. Like I was the barn and all the shit getting thrown at me was sticking.”

That’s a line from the character Jack Quarry in Quarry’s Blood, the new crime novel by Max Allan Collins. Quarry’s Blood is part of a series published by Hard Case Crime. The Quarry series offers pulp crime fiction at its best: sex, guns, tough guys and a great lead character. Quarry’s a Vietnam vet turned hitman, who then turns on the guy who hired him and instead protects those marked for death.

Quarry’s Blood, which is advertised as the last book in the series, may have been influenced by my own life. It's pure speculation, but there are some notable parallels. In fall 2018, my past, like Quarry’s, was weaponized against me. The political left and the media tried to destroy Brett Kavanaugh, a high school friend of mine. They used opposition research, extortion threats and an attempted honey trap. A woman named Christine Blasey Ford accused Brett of sexually assaulting her in 1982 when we were all in high school. Ford claimed that I was in the room when it happened.

When I was called by Ronan Farrow in September 2018, Farrow accused me of “sexual misconduct” without telling me who the victim was, when it had allegedly happened, or where. The corrupt media told the public I’d presided over 10 gang rapes, a story spread by a scumbag who’s now in jail. Oppo research garbage was fed directly to the media, who passed it on without scrutiny. The press dug through everything I’ve ever written, books as well as my 1983 high school yearbook. The Stasi media expressed shock I’d even considered certain ideas. “Mark Judge has said and written things that are much more offensive than anything Brett Kavanaugh ever has,” Jake Tapper tutted.

One of those “things” was a piece for Splice Today about the publisher Hard Case Crime, the same publisher as the Quarry books. In “The Beauty of Male Passion,” I argued that “the simplest explanation for the popularity of Hard Case Crime is that the books, like most pulp fiction and the film noir movies it inspired, are about animus—the Jungian term for male passion. Like a Scorsese film, they depict men on the edge when the world is increasingly hostile to dangerous and flamboyant men. In the 1950s, writers like Jim Thompson and Dashiell Hammett brought readers into a world where carefully manicured lawns, Jell-O and white picket fences hadn’t taken hold. In He Walked by Night, one of my favorite films from the era, the killer literally works underground, sliding into the dark labyrinth of the city’s sewer system to escape detection.”

In the wake of the Kavanaugh hit, the media went absolutely bonkers with the Hard Case article. It was quoted everywhere from USA Today to Democracy Now! On MSNBC Stephanie Ruhle looked like she was going to pass out—“This is sick stuff.” Washington Post weasel Avi Selk described the article this way: “In an ode to ‘sexy’ pulp novels, Judge lamented ‘social justice warriors’ who confuse rape with innocent demonstrations of masculinity. He wrote then of ‘an ambiguous middle ground‘ where the woman seems interested and indicates, whether verbally or not, that the man needs to prove himself to her… If that man is any kind of man, he’ll allow himself to feel the awesome power, the wonderful beauty, of uncontrollable male passion…To illustrate his point, [Judge] linked to a scene from the 1981 film “Body Heat,” in which the hero forcibly breaks into a woman’s home and is rewarded with a kiss.”

Quarry’s Blood starts with a flashback—to 1983. It’s the year I graduated from high school. While I was helping to produce a yearbook that would become more scrutinized than the Voynich manuscript, Quarry was shielding an old lover, Luann, from two hitmen. He efficiently dispatches the two mooks and—of course—beds Luann.

Then the book suddenly flashes forward. It’s 2021. Quarry’s retired and co-managing a lodge in rural Minnesota. Bad guys come for him—he’s offed a lot of people in his nearly 70 years. However, the most dangerous foe isn’ta hitman. It’s a reporter. A woman named Susan Breedlove (come on man!) appears at Quarry’s door. She’s a true crime writer and has made a discovery: for decades Quarry has been publishing true crime novels under a pseudonym. Breedlove put the pieces together and wants Quarry’s story.

This is why Quarry feels so fucked. He’s got goons who want revenge coming to get him, but also an aggressive reporter who’s discovered his old writings—“I’d had my old life hurled at me into this new one.” He wonders why he wrote those original books in the first place: “If I had to do it over again, I wouldn’t publish the fucking things. But we were—and are—way past that now.” I had similar regrets when my old books were dug up during the Kavanaugh hit. But then I realized the alternative was self-censorship, which is what the American Stasi wants. As Quarry says, “It shook me that I felt shaken…Then I said ‘Fuck it’ and got up and got to work.” There are twists and turns in Quarry’s Blood, including about Susan Breedlove. I won’t spoil them.

In the beginning of Quarry’s Blood, Collins offers a definition of “meta”—“showing or suggesting an explicit awareness of itself; self-referential.” This refers to the idea that Quarry was found out as the author of autobiographical books, in fact the very books that’ve been published over the years by Hard Case Crime. (Note: Quarry isn’t a real name but a code name used by a former boss, so the name could be used in books without anyone knowing the real author.)

If that’s meta, I think I can go one better. In 2018 a hit was put on me by the American Stasi. The attack involved some low-life characters right out of a Hard Case Crime book, as well as extortion, death threats, ghosts from the past, a femme fatale, and unearthing and weaponizing books and articles I had written—including a scandalous (to the media) one about the publisher Hard Case Crime. My ordeal would inspire the plot of a future Hard Case Crime novel, Quarry’s Blood, whose plot would involve a reformed hitman who’s almost undone by a reporter digging into his past and the books he had written. Quarry’s Blood would inspire a piece in Splice Today, which you have just finished reading.