It's a cynical PR move. 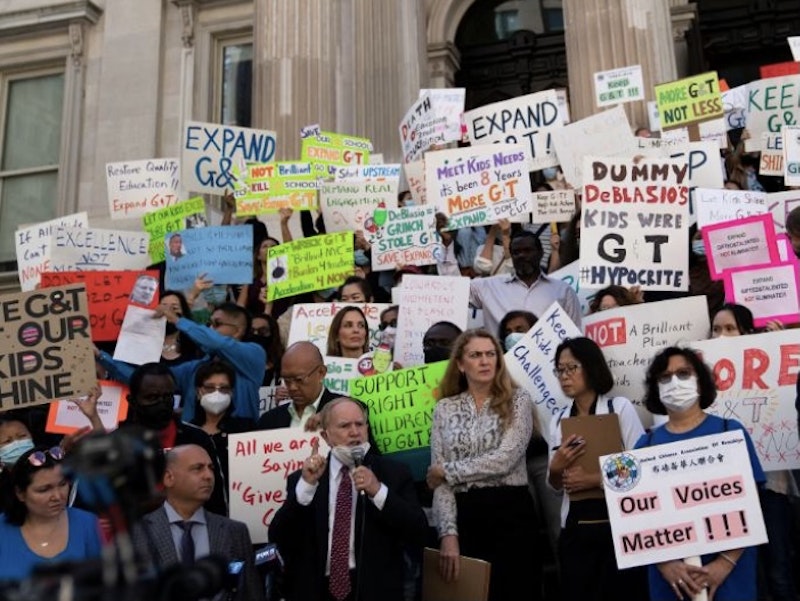 The end of Bill de Blasio’s mayoral tenure also ended his School Diversity Advisory Group (SDAG)—commissioned to promote school diversity and integration in NYC’s racially-segregated public school system. SDAG’s policy recommendations were focused almost exclusively on eliminating gifted and talented programs, the admissions test for the city’s specialized public high schools, and the use of academic screening (or evaluating standardized test scores and/or grades in school admissions). Although SDAG is gone, its recommendations have been consistently held up on a pedestal by the media as the progressive vanguard of the fight against educational inequality and de facto urban school segregation. In one sense, this isn’t wrong, since similar policies are debated and adopted around the country. But it also brings up the question of whether these policies can accomplish what they claim to—and if not, why they’re the only ones that receive media attention.

When asked to comment on the racial disparities in test scores on New York City’s Specialized High School Admissions Test (SHSAT), most education policy experts will reference amorphous and seemingly insurmountable factors like poverty and structural racism, before pointing out that the exam itself is effectively racist based on the disparities in test scores it produces. The city’s nine specialized high schools used to enroll large numbers of Black and Hispanic students in the 1980s and 90s, during which—as Michael Powell points out in the first good New York Times article on the subject—the city’s low-income Black and Hispanic neighborhoods experienced greaterrates of poverty and violent crime than today. In 1981, Black and Hispanic students made up nearly two-thirds of Brooklyn Technical High School’s student body. Though the numbers were lower at Stuyvesant and Bronx Science, they were still more than 10 times greater than today. New, the city’s nine specialized high schools have a combined Black and Hispanic student enrollment of nine percent.

In 2007, the Bloomberg administration attempted to level the playing field by standardizing the entrance requirements for gifted and talented programs in elementary schools—eliminating the convoluted system of school-specific admissions processes by administering a single universal admissions test to kindergarteners across the city. The thinking was that this would eliminate the advantage in admissions that accrued to white middle-class families better able to navigate the esoteric admissions processes that existed before. In practice, the policy ended up as an illustration of the old “road-to-hell” adage. The well-intentioned new admissions policy succeeded in shuttering the majority of gifted and talented programs in the city’s poorest (and most residentially racially-segregated) school districts. It’sno coincidence that beginning in the 2000s, the number of Black and Latino students admitted to the city’s specialized high schools dropped precipitously.

Many of the city’s low-income, majority Black and Latino school districts lacked a single middle school performing in the top quartile on standardized grade level assessments. This helps explain the outrage of parents when the Department of Education attempted to change the selective admissions standards in place at Medgar Evers College Preparatory School—a middle and high school with a student body that is more than 85 percent Black, and where the number of students performing at or above state proficiency standards is more than twice the city’s average—to increase its numbers of academically struggling students and students with disabilities. As the former State Assemblyman representing Medgar Evers’ district asked, what’s wrong with excellence?

In 2019, Robert Cornegy Jr.—the City Councilman representing Bedford-Stuyvesant and Crown Heights—wrote a letter to former Schools Chancellor Richard Carranza, joined by 18 other City Councilmembers, calling for more gifted and talented programs in the city’s majority Black and Hispanic school districts. Cornegy noted, “As recently as 1989, Brooklyn Tech was 51 percent black and Latino. As enhanced academics for high-potential students in those communities was eliminated, the percentages of students of color [enrolled in the city’s nine specialized high schools] decreased to the point we are at today.” The Carranza administration’s response was mystifying: “We need to eliminate the single test for specialized high-school admissions now.”

In New York City, eliminating academic screening, testing, and gifted programs would likely have a negligibly small effect on integrating public schools. At the high school level, eliminating the Specialized High Schools Admissions Test (SHSAT)—the sole criterion for admission to the city’s specialized high schools—is impossible to take seriously as a school integration strategy because only approximately six percent of the city’s public high school students attends one of these nine schools.

While experts and policymakers blame the SHSAT and academic screening for the city’s stark educational inequalities, City Council members representing the school districts that suffer most from these disparities have taken a strikingly different approach. While de Blasio’s SDAG persistently called for the elimination of gifted and talented programs, the City Council has proposed expanding gifted and talented programs and dual language programs, not just to the city’s poorest and most racially segregated school districts, but to the most under-enrolled and struggling schools within these districts.

This illuminates a further point missing from the anti-screening analysis: only those elementary and middle schools situated in already racially-diverse school districts can opt to abolish academic screening as a means of achieving school integration. Of the city’s 32 community school districts, only nine are sufficiently racially diverse to implement this strategy. The remaining 23 school districts are racially segregated due to patterns of residential segregation. Achieving racially-integrated schools in these districts would require city government to redraw school district borders. Unlike the City Council, SDAG never recommended redistricting.

While un-screening the better-resourced, higher-performing, and more desirable schools within one of the city’s nine diverse school districts opens up a few more seats for students in those districts who might not otherwise have had access to them, the flow of students between district schools only goes one way: into the few coveted, well-resourced schools. No parents with any choice in the matter—white and middle-class or otherwise—will be enrolling their kids in one of the district’s failing public schools in the event that they don’t get a seat in a higher performing school. Charter schools, parochial schools, and private schools (for those who can afford them) will absorb the outflux, while most district public schools remain under-enrolled and underfunded.

Writing from the vantage point of the white flight and de facto school segregation of the post-Brown v. Board of Education decades, Derrick Bell (a former NAACP school integration lawyer and the grandfather of critical race theory) put forth his theory of interest convergence—positing that lasting school integration would only come from the overlap in the interests of Black and white parents in having their children attend high-quality public schools. Bell insisted that “effective schools” for Black students must be “a primary rather than a secondary goal of integration”—a priority that he found consistent with those of “many white parents [who] recognize a value in integrated schooling for their children… as merely one component of an effective education.”

When it comes to the quality of public education, it is always easier to drop the ceiling than raise the floor. The only innovation has been rebranding this as educational equity. It’s possible that investing in smaller class sizes and more experienced teachers could boost the performance of academically-struggling students, while expanding access to gifted programs in low-income, residentially-segregated districts could diversify the top public schools. Instead, California passed a law requiring high schoolers to take an ethnic studies course, citing a Stanford study finding that taking ethnic studies slightly improved the math performance of a cohort of academically-struggling students. The revised version of the state’s math curriculum framework advocates teaching math from a social justice-oriented perspective. There’s something perverse about the idea of replacing Algebra I (which San Francisco’s Department of Education recently removed from all middle school curricula) with culturally-responsive math pedagogy in majority low-income Black and Latino school districts. The implication that math instruction itself is racist (which wasn’t implied but openly stated in the first controversial draft of the math curriculum framework) could only be the brainchild of elite institutions.

As Freddie DeBoer writes, rich kids will always be able to take algebra. While Algebra I is tested on the SHSAT (and is a necessary foundation for most high school math classes), many New York City middle schools don’t offer it at all. Maybe that makes the test unfair, but the injustice runs deeper. Lowering academic standards based on the disparities that they reveal represents an abdication of the state’s responsibility to provide the poorest and most underserved students with an effective public education.

Critics of academic screening and public gifted education could make the case that there shouldn’t be any academically-accelerated or selective public schools because it’s contrary to the mission of public education—that is, to admit everyone. That would mean openly acknowledging that the only academically-accelerated schools ought to be private. But even proponents of un-screening schools disagree about where to draw the line between equity and impoverishing public school academic offerings. For instance, in a recent article in The New Yorker, Nathan Heller—who’s in favor of San Francisco un-screening its competitive public schools—stops short of endorsing other equity measures contemplated by San Francisco’s school bureaucracy—eliminating and redistributing the funding that certain schools receive for offering Advanced Placement classes and exams.

Why should public schools where more students take AP exams receive more funding than schools where no students do (and which probably need the money for more basic student needs)? At what point does it become fair to say that what we’re seeing is just austerity rebranded as equity?