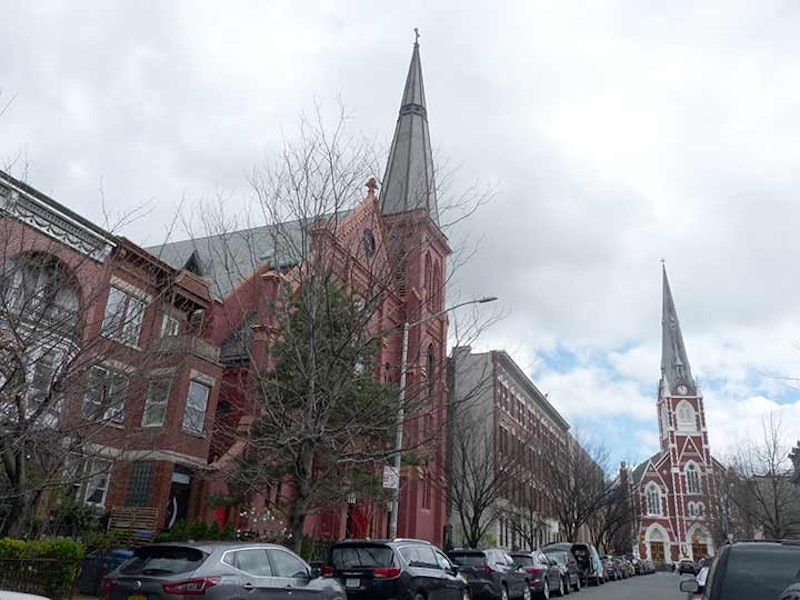 Greenpoint street names aren't easily explained. Very early on they simply bore letters, from A to Q; they later acquired names, in alphabetical order: Ash, Box, Clay, Dupont, Eagle, Freeman, Green, Huron, India, Java, Kent, Milton, Noble, Oak and Quay. L seems to have become Greenpoint Ave., and P Calyer St., both by 1855. Some of the buildings still carry letter signs, which marks them as old. Ash, Box and Clay attest to the area's industrial past while India and Java hark back to the region's former waterfront history, with ships carrying cargo from far-off lands laid anchor; Milton St. was named for 1840s ship chandler Daniel Milton. The Meseroles and Calyers were early settler families in the 17th century, but it was industrialist Neziah Bliss and educator Eliphalet Nott who transformed the sleepy farms and fields into an industrial and shipbuilding town beginning in 1834. Meserole and Calyer are Greenpoint street names, while Bliss settled for a street in Sunnyside, Queens, across Newtown Creek.

Milton St. runs just two blocks—from West St. east to Manhattan Ave. It’s the first in its alphabetical series to not extend past Manhattan Ave.; there's a bend here that allowed the parish of St. Anthony of Padua to construct a massive near-cathedral in maroon and white brick in 1875, employing Patrick Keely as architect. It's 240 feet tall.

Sixteen years later, St. Anthony was joined by a new spire, as the Evangelische-Lutherische St. Johannes Kirche, or St. John's Evangelical Lutheran Church was constructed by German architect Theobald Engelhardt. While Anthony's the star, John has a couple of highlights, like a flying buttress here and a collection of lancet windows there to recommend it. 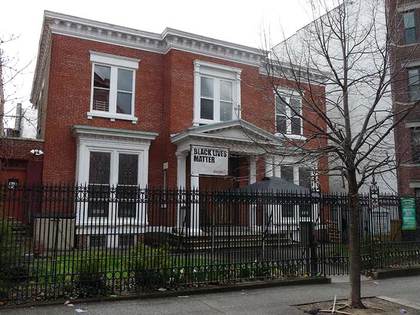 By 1860 the “five black arts,” printing, pottery, gas, glass, and iron, were firmly established. The earlier industries remained only as long as they were needed for the life of the people and then were supplanted by other forms of activity. Farming gave way to shipbuilding and then to factories. Shipbuilding went to the Pacific coast or to the coast of Maine, where raw materials from the forests could be had in abundance at the water's edge and labor was cheaper and not well-organized. New avenues to wealth were opened as a result of the industrial invasion.

For such a short street Milton has a big spiritual side. The Greenpoint (Dutch) Reformed Church at #136 is the former Thomas C. Smith mansion. In a formerly industrious neighborhood this was the relatively modest castle of one of the area's chief manufacturers, as Smith (1815-1900) was the founder of the 19th century's foremost fine china and porcelain makers, Union Porcelain Works. Smith built the house in 1867, and the church moved here from Kent St. in 1944, after the building had a stint as the local YMCA. 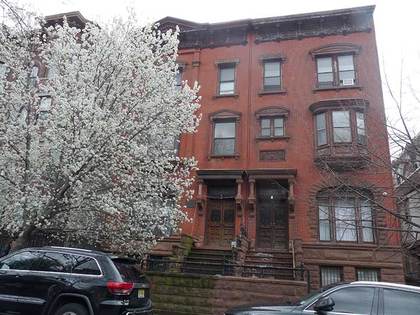 A few buildings west on the same side of the street there the St. John's Parish House. It was also built by Engelbreit, in 1889; the AIA Guide to New York City describes "The bracketed canopies over the entrances [as] lusty celebrations of entry." Formerly the building had a bowling alley in the basement. The alley was manually run, and there are only two lanes, but presumably it was installed for the wholesome entertainment of the Lord's servants originally living there. Still fully functional. 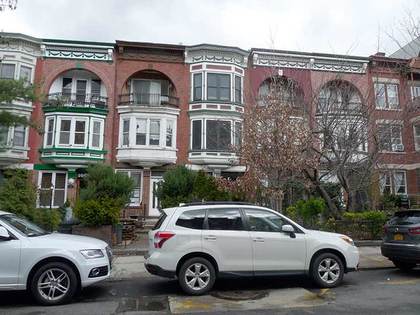 Many of the homes on Milton St. were built by built by Thomas C. Smith, who had a way with a recessed porch known as a loggia. Other than a renowned china maker, Smith also had a long career as an architect. Many of their original, or near-original elements are still present; I tend to look at doors, especially noting double doors or doors that contain mini-windows. The ground floors (above left and left) are likely rented as apartments, and have small gardens in the back; I’ve had friends who lived in houses just like these, and they've stayed there until they find something they can afford. Sometimes, that's in Long Island, upstate New York or Georgia. These days, it's rarely in Brooklyn. 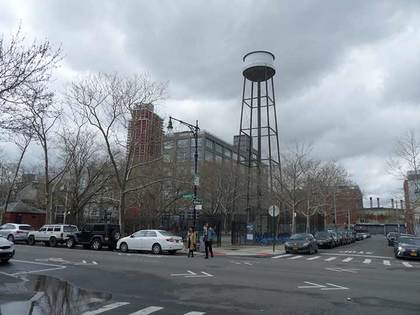 Though Greenpoint is as patriotic as the next neighborhood, the American Playground at Franklin between Milton and Noble isn’t extremely patriotic in origin, nor is it coincidental. The name refers to a former business in Greenpoint. The American Manufacturing Company was a vast complex that made rope and twine products necessary in the era of shipping. After the company folded in the 1960s, the buildings were home to light manufacturing and warehousing, until most burned down in a suspected arson in May 2006. Today, waterside apartment buildings are in their place.

The Continental Ironworks was founded in 1851 and constructed America’s first warship with an iron hull, the Monitor, in 1862, and built other ships of the same type. After the age of the original ironclads the works continued to manufacture iron products until its closure in 1949.

The American Playground at Franklin St. between Milton and Noble Sts. is a standard-issue NYC playground with swings, volleyball walls, restrooms, etc. It’s overlorded by a huge water tower that formerly served the Greenpoint Terminal Market on West St. Until 2014, the Polish flag on one side and the inscription “Save The Palestine” were emblazoned on it, but owners of the property painted over the marks in 2014. The city leased the site from American Manufacturing as early as 1927, and it became a full-fledged playground in 1955. 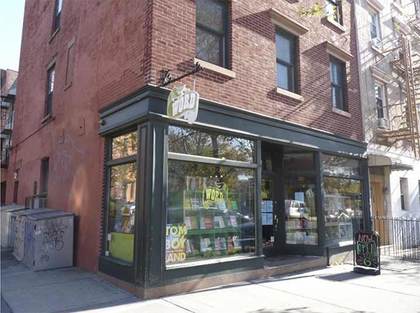 Word Books has been the venue for a couple of Forgotten New York events over the years, including a joint appearance with Greenpointer author Kate Christiansen, whose novel The Astral was set in the neighborhood. The building it’s in, 126 Franklin at Milton, was built in 1852 and is landmarked, since along with every other building on the east side of Franklin between Noble and Java, it falls within Greenpoint’s Landmarked District. 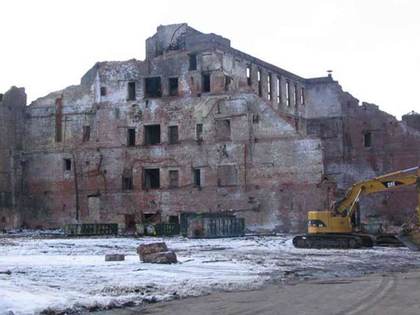 Much of the Greenpoint Terminal Warehouse, a group of abandoned commercial and factory buildings between West St. and the East River from Milton to Oak Sts., burned down in an extremely suspicious fire May 6, 2006. If it was a mecca for urban explorers before the fire, it's even more Pavlovian now; why, the gate was wide open and I wandered in without any barking security guards or dogs to mess with, back in 2006 when I got this photo. If it wasn't for my delicate back muscles, I would've been clambering over the ruins, which were soon carted away, with the space still used for van parking though other East River waterfront areas are now the sites for expensive apartments.