Finding a non-problematic barber is hard these days. 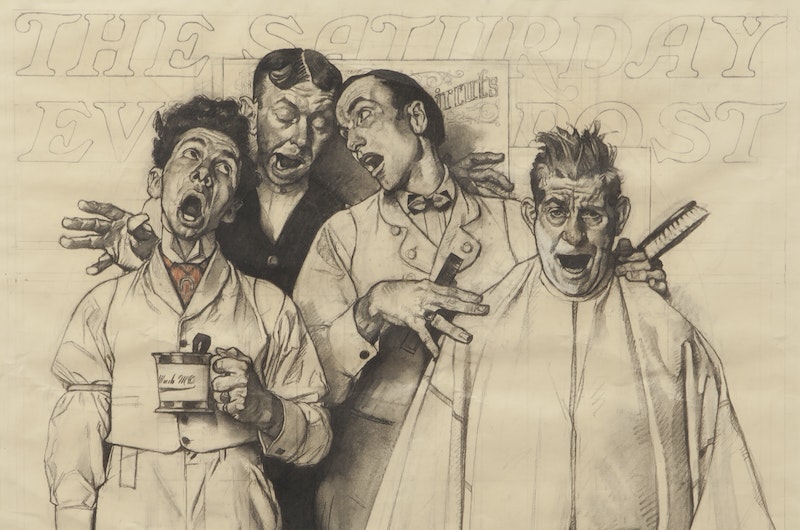 I’m buzzed. I mean, a little buzzed. I had a microbrew. How fancy! I rarely drink alcohol, makes my hackle dry out. Unfortunately there still isn’t any moisturizer available on the “above board” market so I’m forced to go underground to keep my feathers and claws from feeling too chapped.

It’s too cold for March; I’m getting really sick of this weather. Wind, rain, snow, sleet, beats me—I hate it all. Except when it’s pretty at night and Monica and I can go out and walk amongst the other animal footprints in the field behind our barn. I’ve never met the mice or muskrats that I’m sure live on our property, but I respect their privacy and wish them only the best. Sometimes I leave scraps of vegetables and carrots out for them, but I have a sneaking suspicion that those fucking rabbits Jenna and Simone always get to them first. So entitled, and way to live up to your name. Promoting stereotypes much?

Anyway, I got that microbrew at a barbershop of all places. It’s new in town, a half-hour wagon ride from our barn, very new, very hip. They specialize in beards and mustaches but they also serve the animal contingent in the area, presumably in an effort to appear less problematic, less gauche, less of the gentrifying force that they actually are.

Wally, my wagon driver, saw the painted sign on the storefront of the bearded white man with the curly mustache and the neo-Nazi haircut. Wally took one look at the place, turned to me and said, “That place is for rich white people. Ha! Har… har… HARRRR..!” And then he started bucking and braying because he’s a donkey. I tipped him 50 percent and went about my business in the barbershop. What a bizarre environment, uncomfortable from the moment I walked in, everyone looking at me like an outsider. To be fair, there were no other animals in there at the time, just lame ass white dudes, but I’m used to being other’d, so I carried on and took a ticket to get in line.

Luckily they were very hesitant and respectful and “safe” in their dealings with me. My reputation precedes me, not only as an intellectual and raconteur but also as a violent creature known to operate freely outside the law. So at first the mustachioed barbers were very kind, offering me a free beer (“Malty Way”—yeah, super creative, guys), and constantly asking if I was “OK” and if I was “comfortable.” Fuck no I’m not! The music in here sucks, it’s too bright, the vinyl siding on the seats is hurting my rump, and everyone in here is ugly.

That was what I thought, but I kept it to myself, because I’m a polite bird. But then the two “hair specialists” saw a woman outside and made some very off-putting, really disgusting comments about her body. I perked up, pecked and drew blood from the one guy’s nose—I didn’t mean to pull out his septum piercing but I’m glad I did. Like I said, I get special treatment, so no calls were made, and my own form of vigilante justice had been served. I left without paying, and without having my feathers trimmed completely.

Oh well, Monica would say she’d help me fix it. We’re not gentrifiers, we’re just trying to live in peace. Can’t anyone open a business around here without being insufferable and sexist? Bennington if you’re reading this that is not a challenge, please do not start another LLC.