O.J. Simpson and a Kicker

There’s so much evil on the streets. 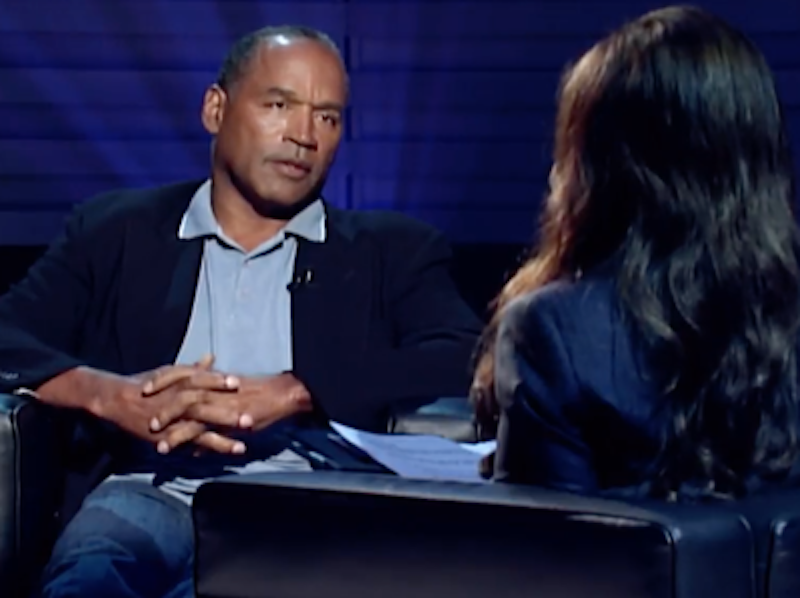 I didn’t notice until Judith Regan’s 2006 interview of O.J. Simpson aired on Sunday (in the Simpsons’ usual timeslot, oddly enough) that O.J. shared an agent with my most famous teacher from high school, novelist Wally Lamb. Lamb was the first writer recommended by Oprah’s Book Club, and his subsequent novel I Know This Much Is True, about a man whose twin is a schizophrenic conspiracy theorist, becomes an HBO miniseries starring Mark Ruffalo this year.

Regan probably doesn’t see much similarity between her two clients, but I’ve now seen both do faux-confessional performance art. Simpson seemed to be lying in that old interview when he claimed his participation in the murders of Nicole Brown and Ron Goldman was purely “hypothetical,” and back in high school, Lamb, who had a vibe similar to that of Beavis and Butt-head’s sensitive teacher Mr. Van Driessen, did a classroom exercise in which he really tried to convince the class (briefly) that he was a psychic involved in secret government experiments (an “adjunct” in the purported terminology of the secret program).

My own dark confession: there was a time when I thought that hippie fake psychics were probably about the worst thing the culture has to offer, but the older I get, the more I worry that the world may contain more O.J.s than Lambs.

In fact, Judith Regan herself is pretty scary, from what a writer colleague or two have told me. You may recall her being the mistress back around the time of 9/11 of then-New York City police commissioner Bernard Kerik. He went on to become the interior minister of Iraq, surreal as that now sounds, and later was nominated to head the Department of Homeland Security but instead ended up going to prison over financial improprieties.

The naïve might think, “Oh, poor Judith, aiming to date a top lawman but ending up with a criminal!” That’s precisely the kind of unwarranted surprise that keeps the world endlessly supplied with stories of betrayal suitable to become Lifetime TV-dramas. The truth is that both cops and criminals are often dangerous, high-testosterone thugs, and it should be no shock that the two categories of humans often overlap. Media agents are pretty dangerous and sometimes criminal as well, as I should recount at greater length one day.

But then, low-empathy people and outright psychotics are all around us, I now assume.

Though I don’t think it resulted in any injuries, it would appear my own neighborhood has a sociopathic child in it. The day after the Regan/Simpson interview aired, as I was passing a fruit stand a bit north of me, I noticed a cute Yorkie, and just as I was noticing the dog (while his owner was buying fruit), so too was a child of about four, who was walking along holding hands with his mother. The child picked up his foot and gave a swift kick to one back leg of the poor dog—a dog, keep in mind, belonging to a total stranger on the streets of New York who might easily and justifiably have retaliated with violence, not just anger.

It wasn’t even, so to speak, a "normal" kick, like nudging a football, but nearly a stomp, as if intended to flatten the dog. As I looked on horrified, the mother just dragged the kid faster northward, away from where I was headed, saying "No!" and not much after that that I could understand. The demonic child, who one might've expected to react with sullen anger born of long abuse or malevolent psychosis or something, which would’ve at least helped make sense of it all, instead giggled a high-pitched giggle and looked like the happiest, sunniest kid in the world, without a care and havin' a ball.

I was so aghast I stood at the fruit stand for some time, maybe 30 seconds, watching the demon child and his mother continue northward, receding, wondering if I should try telling the mother that her child is sociopathic and needs to be monitored by psychiatric professionals if he isn’t already being watched. That’s the kind of help I routinely render in this world. But I wanted to see the dog owner’s reaction first and not get in the way—and then I gradually realized the dog owner, who was wearing headphones, had miraculously remained completely oblivious and wasn’t taking off the headphones even while completing her fruit purchase (making it unclear I'd easily be able to get her attention).

And with the kid disappearing up the street, it wasn’t clear the owner’s life would be in any way enhanced by knowing what’d just happened, and the dog already appeared to have put the whole thing behind him, resilient fellow that he is. So I turned back away and headed home, just a bit more worried about the world.

At home, I learned a schoolteacher had just been disciplined for feeding a live puppy to a snapping turtle in front of students. This is an evil world, in short, and I continue to wonder how deep and dark its depths really are.