Nothing beats a road trip with your kids. 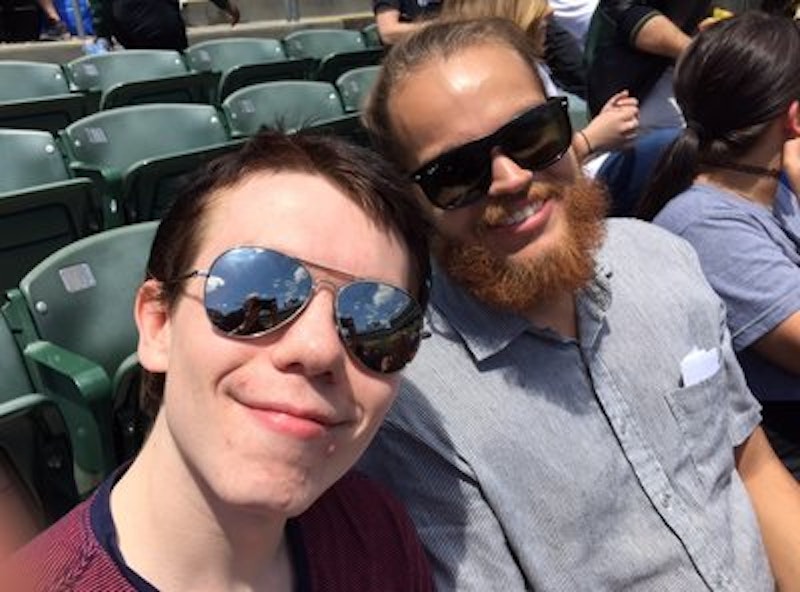 It was about seven in the evening last Wednesday on Haight St. in San Francisco—although it could’ve been 45 years ago—and I’d stepped outside of Amoeba Records for a smoke, frittering away some time while my sons were combing every last vinyl and cassette bin in the huge store. A junkie approached, mumbled a request for a cigarette, snatched it out of my hand and quickly disappeared into no-man’s land. His age was indeterminate: maybe 55, but more likely a very rough 40 or even younger, the vomit-stained jeans and scabby face telling a story that no sober person would want to hear. All the same to me, as I surveyed the seedy surroundings (no dreaded gentrification here), but then out of the cosmos another man appeared, dressed like an elf, with knee-high felt boots, green overalls and a pointy hat, and said, smiling broadly, “Hey man, here’s a dime for that cigarette. Just bringing the good karma back to you, know what I mean?” Frankly, I’d forgotten everything I ever knew about karma, which was almost nothing, but I dug the patter, and if he was a time traveler from 1969, well, on this particular night, it was entirely believable.

Nicky, Booker and I took a cab to Clay St., where we had dinner at Spicy King, a Chinese restaurant my longtime friend Mark Hertsgaard—with whom we had a quick coffee and conversation earlier in the day, and then he was off to an academic conference after putting us on a BART train to Oakland where we’d see Boston’s Wade Miley miraculously out-duel A’s ace Sonny Gray for a uplifting 2-0 win (Nicky and his buddy Alex, a Baltimorean now living in Oakland, are pictured above)—recommended, a Szechuan joint where palefaces like us were scarce. And that was true: a no-frills spot with an impossibly complex menu that, in our jet-lagged but overstimulated state, we didn’t fully embrace. I felt a bit sheepish ordering pot-stickers, eggplant, chicken with walnuts, Chinese broccoli and shredded pork, when choices like pig’s intestine and braised cuttle fish were available, but the spread was uniformly delicious, and a far cry from the alleged sausage—could’ve been dog or rat meat—I ate in four bites the night before at the game where Boston’s Justin Masterson was lit up for about 100 runs before the 5th inning as the whipping wind and 45-degree temperature cast a pall on our first visit to this broken-down park, now called O.co Coliseum.

After dinner we walked up California St. to the Mark Hopkins Intercontinental, and though I appreciate the peculiar steep streets in San Francisco, that left my sons, first-timers to the city, gaping, it’d be a sin of omission leaving out the fact that it felt like I’d been on a treadmill for a solid hour. Back at our rooms, the three of us chatted aimlessly, skipping from subject to subject, before I called an end to the rap, and, mindful of a very early flight to Seattle the next morning, forged ahead with Jennifer Egan’s vastly overrated Pulitzer-Prize winning 2010 novel A Visit From the Goon Squad, before drifting off to sleep. (Egan is a decent writer, and I did appreciate this sentence: “Bennie’s office was awesome, and I don’t mean that in the male teenage skateboarding sense—I mean it in the old-fashioned literal sense.”)

It was a whirlwind trip the boys and I were on, baseball- and family-oriented, and while the itinerary—San Francisco to Seattle and down to Santa Barbara—was nearly perfect, the breakneck pace was, in retrospect, a bit taxing. It all made sense to Nicky, who goes out on far less luxurious tours with his band Sherman Whips, where eight-hour drives and catching shuteye on a floor is the norm, but I’d have benefitted from a day or two with no flights beckoning and a sense of knowing what day it was.

I hadn’t been to North Beach since the 1990s, and was dismayed that the legendary neighborhood has succumbed to the generic modern America—less cafes and strip clubs—but glad the landmark City Lights bookstore was nearly as robust and bustling as all my visits since first making the pilgrimage there in early 1974. Granted, the once-extraordinary periodical section had dwindled to a couple of shelves—no news there—but unlike independent bookstores across the country, City Lights, I’m certain, is in no danger of an overnight switcheroo to a CVS. Booker picked up several titles, and was reluctant to leave after I’d exhausted the extensive history and music sections, but we had to make tracks out to Oakland.

A few hours earlier, wandering around in a non-descript part of town, Booker was starved and we found an all-day breakfast spot, where he had eggs while I marveled at the most curious sign on the wall, which read, “We reserve the right to refuse service to anyone.” This struck a jarring note: after all, this was San Francisco, not a backwater town in Tennessee, and I’d have thought that this city of tolerance was an anything-goes zone, and no one would look twice even if a man or women of any race walked in naked and requested a cheese omelet. Could be the proprietor wanted to keep out the hobos and junk-dealers, but it was odd. I don’t think Jerry Brown, Nancy Pelosi or Barbara Boxer would approve.

Seattle hasn’t captured my imagination like so many other Easterners—the cliché that it’s a small San Francisco (and Portland’s a small Seattle) rings true—and while I applaud the stronger coffee in the endless cafes there, how many cups can you drink in a day? The boys were enthralled with the city, so maybe it’s a generational preference. The Four Seasons in downtown Seattle, however, is the best franchise of that chain that I’ve ever stayed in: reasonable rates, superb staff and lickity-split room service. The city is sort of a mecca to Nicky—Kurt Cobain and all that—and the boys grooved with the vibe, which escaped me, as we hit a few record and bookstores on Thursday afternoon. I do get crotchety on occasion, especially when I can’t hail a cab on the street, but that’s an East Coast tic.

On the other hand, Safeco Field, home of the Mariners, is just as delightful as it looks on TV, and, unlike Fenway Park or the still-new Yankee Stadium, is very easy to navigate. Except for the retractable roof, Safeco’s quite similar to Baltimore’s Camden Yards. A half hour before the game (a thrilling 2-1 win by the Sox), we met my niece Jenny and her husband Rick—their kids were off on overnight field trips—who ferried in from nearby Tacoma, and after grabbing some grub from Safeco’s very decent selection, we gabbed away in our seats. Jenny’s one of the most uplifting members of our extended family—similar to her dad, my late brother Jeff—quick to laugh and attentively inquire about the latest in her cousins’ activities, and Rick, not a huge baseball fan, was a sport to make the trip.

We had a brutally early flight the next morning—Seattle to San Francisco to Santa Barbara—so I awoke at five and tooted out reveille to the boys and we rushed to Sea-Tac. It was a typical United Airlines disaster (Nicky wrote about it yesterday) and because we sat on the tarmac for an hour we missed our connection and wound up driving from San Francisco to Santa Barbara. Because, you know, airlines have shrunk their roster of flights, instead thinking of ways to gouge customers. Actually, it was Booker who manned the bright-red Toyota, as his brother and I don’t drive, and it was a six-hour slog, punctuated by mountain vistas, cows on farms waiting for slaughter and a post-mortem home at McDonald’s, and a riveting billboard advertising pea soup that we saw three times. So, even though I enjoyed shooting the breeze with the fellows at a deli in Buellton, let’s face it, an hour-long plane ride is preferable.

Because of United’s ineptitude, we missed seeing my niece Zoe and her husband Andy, but still got together with my sister-in-law Mary (along with her sister Barbara and husband Bill), whom I’ve known since 1962 or so, just a stone’s throw from our hotel—also a Four Seasons, and quite swanky, though it’s so palatial getting there from here was an Alice in Wonderland trick—and spent an exceedingly pleasant evening with them. Mary’s a marvel in the kitchen—just one of her many attributes—and her meal of swordfish with spinach and an avocado and tomato salad put my digestive system back in gear after all the on-the-run garbage I’d consumed. As it happened, our flight back to Baltimore the next day got screwed up, and we were forced to spend an aimless extra day in Santa Barbara, admittedly not the worst place to be stranded, and after barking at under-qualified airline representatives, apprising my travel agent of the situation and re-booking at the Four Seasons, I was steaming. Good thing I wasn’t alone—blood might’ve been spilled—and my boys took care of their bedraggled dad, who was missing his wife something fierce, and by the time we got back from Dulles to rain-soaked Baltimore on Sunday night, I was whipped. But hey, the Sox won two of the three games we saw, so that was consolation enough.