I'm an all hardware guy. 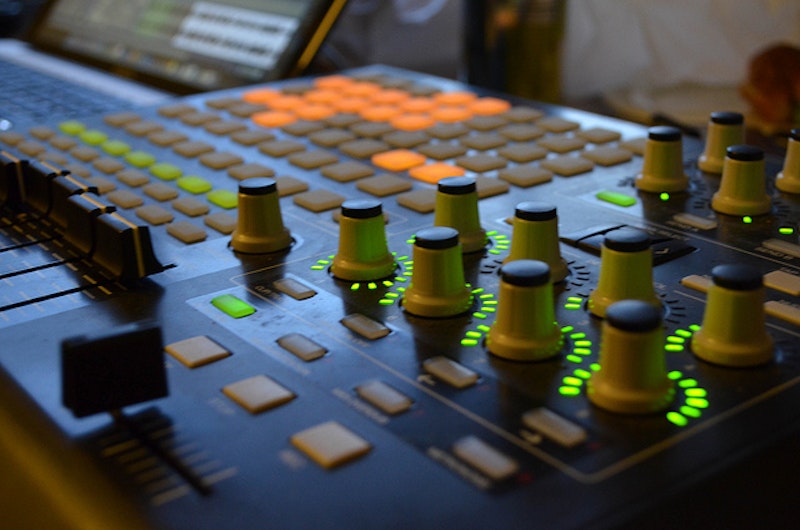 At eight o’clock every other Friday night a machine emits a tiny plume of fog in a Brooklyn nightclub. Sound is an accessory to this sight. At times the patterns are consistently deep. To someone standing outside this sounds something like wump wump wump. At other times, and in absence of a rumble, the tune is more of a wheedle squeak wee. Tonight the DJ is playing '90s progressive house music. The sun is still coming in through the frosted street windows. A man on a ladder is installing a tiny mirror above the DJ. This tiny mirror is a vital accessory to the debut of the club’s purple lasers, which an hour later will bounce off the spinning disco ball when the fog machine emits its second plume.

I didn't bring my sampler to make wump noises. I couldn’t because I had recently sold it. I’ve owned four or five different samplers at various times, all the same model. I've always been an all hardware guy. It's my long-held opinion that if a man obscured by a booth cannot push a rubber button which causes an immediate sonic change then the audience will be subject to the immediate and insurmountable trauma of the fourth wall of performance being broken. Walls are the necessary precursor to maximizing illusion. Despite the immense impracticality of erecting them, people go so far as to cherish them, to paint them. The Berlin wall was covered in graffiti years before it fell.

Wheedle squeak wee resonating in a small room with lasers isn't what I imagined the soundtrack to the destruction of my creative wall would sound like. To me this devastation would more closely resemble in tone and abrasive character Rihanna screaming Yeh in a metallic Barbadian accent. I’ve imagined this scream before. I’ve searched over the facets of its encapsulating postmodern gem-ness and always concluded it's an inevitable and ridiculous truth, such as the way graphene is extracted with scotch tape.

I remember a moment from my early twenties. I was buying a guitar and was to meet the seller on a hill overlooking the Baltimore harbor. I signaled to him and he opened the guitar case. As I held the guitar I asked the man why he was selling such an impressive instrument. He had just turned 33. “I’m done” he told me. He had completed his final tour for the foreseeable future. He was now looking forward to spending time with his wife and his pets. He alluded to children. The beauty about discovering truth is that while it closes a door it opens up the possibility of exploring a different line of inquiry.

The truth about selling my sampler on Craigslist was that it took me moments to deliberate and milli-moments to draft and post it. The ad simply and cleanly read “For Sale. Sampler. Like New.” NYC has no scenic hills of note, which would unfortunately rob the ultimate sale of a proper cinematic element.

It took me under a week to find a buyer, though he was not another musician as I had hoped. A grey haired music shop owner whose name I now forget showed up at my doorstep with money crumpled in his hand. Our transaction was brief. He declined my offer to show him the instrument powered on. “We get lots of these,” he told me. I’m certain he was right.