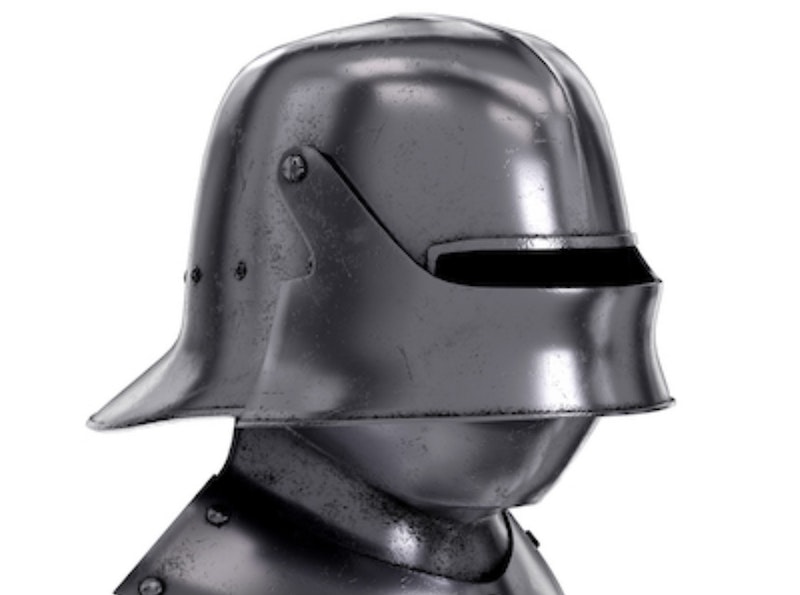 "I Roger, take you Placid, to be my wedded wife. To have and to hold, from this day forward, for better, for worse, for richer, for poorer, in sickness or in health, to love and to cherish ’till death do us part. And hereto I pledge you my faithfulness."

In short order, Placid introduced me to a new way, a path free of tobacco and alcohol. Clean living, clean as a hound's tooth, right with the Lord, brother. Nope, not ashamed to evangelize. And her pop, Zeke, has been the guiding light. It really got into fourth gear when I'd approached her folks to ask for her hand.

After the formalities, Zeke ushered me into his study and said, "I like you, boy. A little rough around the edges yet, but you'll do, as it were, if'n you will, so to speak. I was there, once. Living right with the Lord is a goal, a constant struggle. We're all sinners, but that doesn't mean that we fold up like a card table. No siree, bub! We stand straight, pick up the heavenly sword and swing! Roger, I'd like to introduce you to a splendid group, Silver Knights, a Christian fraternal organization, the finest group of men our county has to offer, the very finest. Not a bad apple in the bushel."

Zeke didn't lecture, kept it pithy, but sent me on my way with some literature, a pat on the back, and my promise to pitch in on their upcoming fair, an event staged to raise money for the poor families.

On our honeymoon, Mr. and Mrs. Roger Kane rented a cabin right here in Prentice, on Lake Tammy. Amber Lantern Cabins was a good start to our new life, a new chapter. A new chapter? Heck, a new book. A book based on the Good Book. Mornings commenced with Bible reading and prayer. Then weather permitting, a woodland stroll filling lungs and psyche with the atmosphere of moldering evergreen needles. Then a big fat breakfast of flapjacks, juice, coffee. Outside, bluebirds sang of the joyous life.

A month before our wedding I was baptized right here in Lake Tammy. Odd, isn't it, how this body of water that spelled the demise of Sheri was the font my rebirth? Proof positive that the Good Lord has a sense of humor, one with a dash of wry.

No electricity at Amber Lantern. It was early to bed, early to rise, days spent swimming in sunshine, canoeing, or reading on the porch swing, screened in from skeeters and assorted pests. I split my reading time between the Bible, Thoreau, Emerson, Steinbeck, and perusing a small stack of Silver Knights literature: the rule book, a history, annual report, a half-dozen recent copies of our monthly newspaper, Vigilant Knight.

When I was a kid, I really loved knights in armor, the Crusades, along with ancient Egypt, dinosaurs, Saturn; all held a fascination. Hard to explain exactly. It may be an aspect of being a boy. The Third Reich, too. Fascinating. How does a ne'er-do-well painter go from a beer hall to the summit of the world? That's one giddy rise, albeit followed by one spectacular fall. Don't get me wrong. I'm certainly not in favor of such a centralized government. Silver Knights are dedicated to small, local, regional, and unregulated. Laissez-faire. Or as Zeke likes to josh, "Lazy fair! Easy going! Liberty!" Makes sense to me. He once pointed out, "Total control. That's where Mr. Hitler made his tragic misstep. Too much dang control. Look to Mr. Franco for a more reasonable approach. On one hand, he understands that the Spaniard is volatile, a hothead, a veritable jar of nitro. The Spaniard requires an iron fist, it's what he understands, it's what he appreciates. But Mr. Franco also has the wisdom to allow for a little wiggle room. Hence the velvet glove. And Mr. Franco is alive and well in Spain today. You'll notice, he sidestepped all that war business. Oh, he's crazy. Like a fox! Anyhoo, them Jews wound up with their own country. All's well that ends well."

He brush-slapped his palms, once, twice, for emphasis, then said, "Smooth as silk for them Jews from here on in, I reckon. That said, laissez-faire ain't nothing but a fancy-britches French term for what I call Americanism. In plain talk it is: live and let live. But living in tune with the Lord. First and foremost, the Lord." He held up a palm to underscore, then said, "After that, all falls into place, easy peasy. Soli Deus gloria."

Now I’m a Knight, complete with a fair damsel, a queen. Someday I'll spill about Placid. For now? She is perfection plus, an angel in dungarees finessing an iron skillet.

Our fair went on without a hitch. We had a merry-go-round, a hot-air balloon ride, archery competition, sundry booths for games and food, the sounds of five-string banjoes and bagpipes filling the summer air. Oh, and there was one fierce spelling bee, finally winnowed down to Susie Oakley, pigtails and gingham, versus Johnny Wheaton, clip-on bowtie and dress slacks. It was a long nerve-wracking bout. He lost, but if he was sore, he hid that with a smile of good sportsmanship, scooted over to congratulate her. I noticed Zeke nodding his silent approval. We raised nearly a thousand dollars. Zeke corrected me against referring to a thousand as a grand. "That's big city lingo. Gangster talk, son. Carries no truck hereabouts."

A new life, a life with Placid, she standing about five feet four, from her head to ground, a slightly hourglass figure. And sober slate-gray eyes, like her mom, Marjorie. Nothing doesn't get past Placid's peepers. She might be part eagle. Fortunately, I'm a good boy these days. And further fortunately, my ranch came with a horse barn and paddock. When I bought the place, I figured that might come in handy. Now Placid's filly, Lacey, is parked in the barn, frolics in the paddock chasing monarchs. And we're going to be a trio next year. In anticipation, we've got a sign out front, The Triple Kay Ranch. But as I said, more on Placid later.

I attended my first Silver Knights meeting in early July, a week after the 4th. I recognized familiar faces, including bank president Dane Schriber, packed into the Quonset hut headquarters. On the way over, Zeke at the wheel of his DeSoto, explained, "We have all types in the Knights. Businessmen, factory workers, farmers, young, middle-age, retirees. And as you've read, all religions, not just Baptist. We've got Episcopalians, Congregationalists, Presbyterians, and in recent years, even a few Roman Catholics." Zeke took a deep breath and sighed, "I've given it a lot of thought, but if'n a Mormon applied, I think I would allow. Anyhoo, we're a good bunch, united in our dedication to both preservation and sensible progress. I take great pride in the work we do. And let me hasten to add, we owe a debt to our ladies auxiliary. Without those gals, we'd be lost. They prepare the picnics, do the cleanup. Like I say, we'd be lost without 'em! Love me some them cherry pie girls! I call 'em Marjorie's Marauders!"

A few weeks later, Zeke invited me on my first Knight Ride, an initiation of sorts. The next level. With this I was in like Flynn.

Members keep a close eye on what happens in the area, and sometimes a straying citizen needs a nudge to get back on the good foot. And sometimes more than a nudge. That's when Silver Knights really step in, to the rescue.

"Ordinarily, some things might, technically, be a job for the sheriff. But why waste the county's time and money? All that nettlesome paperwork for Harry!" Zeke paused, reflected while he and I sat in his study, just the two of us, master and student.

"And sometimes, the shenanigans may not be illegal, exactly. But they exist, to our community, as decay is to a tooth. A cavity isn't illegal, but that doesn't mean you overlook it. No siree, bub! You make an appointment with the dentist, that's what you do. Any dang fool knows that much!  Well, we're like the dentist." Zeke took a swig of mineral water, then chuckled, "Sometimes the dentist, even with all of his book learning and expertise and state of the art equipment, looks at a putrid molar and reaches for a pair of pliers." He hoisted his glass of Sawyer & Sons mineral water. I did too. We drank to Silver Knights, long may we reign.

I liked relaxing with Rev. Kane in his study, his sanctum sanctorum, it of the knotty pine paneling, rolltop desk, the keen scent of oil from well-maintained shotguns and rifles on a wall rack. For lesser men, this would be an island of cigars and bourbon. But here, nothing stronger than mineral water. Even coffee and tea were verboten in the domain of Kane. I was willing to roll with it. Placid was well worth it. And truth to tell, I felt better. A genuine health, a well-being, percolated in me now. I was right with the world, with the Lord. A first! A novel awareness of myself and all that is around me. A profound peace. I felt like both a tiny atom and the mighty universe, simultaneously. In our sessions I learned a lot about Zeke. Scot-Irish, Prentice born and raised, served in WW2, stationed in the Pacific, killed a bunch of Japs, honorably discharged with the rank of commander. Then two years to get his ministry degree. While in college he met Marjorie. Zeke was a poor kid, working to pay his way through, unwilling to accept the GI Bill handout.

Rev. Kane extolled the virtue of self-sufficiency, and the nobility of labor. "A man, if'n he has a mind to it, can learn a lot by washing dishes. It's humbling work. And if'n you add a dollop of elbow grease, making sure each and every glass, dish, bit of silverware, is spotless, clean as a whistle? Well, boy, you've done a good deed for your fellow man. If'n that object is what you'd want for yourself, you've done unto others. Who knows? Maybe a lost soul will see the Godliness of your effort in the sparkle of a plate? And if'n they see that, who knows? It could lead to salvation. The Lord works in mysterious ways, Roger. Never forget that."

How could I forget, even for a minute? God was working within me, the new me, reborn. I felt as if my innards, from arteries to capillaries, had been invaded by a battalion of microscopic cherubs armed with scrub brushes, scouring away the grit and grime of my years of thoughtless sinful living. I am fresh as a daisy, reveling in God's golden glory like a jungle cat sprawling and stretching in a big patch of blazing sunlight.

It was a Thursday, nearing midnight, when five of us piled into Zeke's DeSoto, crunching gravel as we left the Silver Knights parking lot and quietly motored to a secluded wooded area, to Lookout Ridge, Prentice's Lovers Lane. Three old hands in the back, including Dane. I sat up front. Tight-lipped Zeke gripped the wheel, leaning forward, his sights were set on straight ahead. I rolled down my window. The July night air was cool and moist and fragrant as we embarked on our mission. Once we were in the car, no one said a word. The ebony sky was cloudless, clear and clean rural sky, stars so close you could reach out and nestle one in your palm.