My Life in Jamaica

Jamaica has recovered somewhat from the 1970s, and historical artifacts like First Presbyterian Church and the Merrick Theatre have kept it stable. 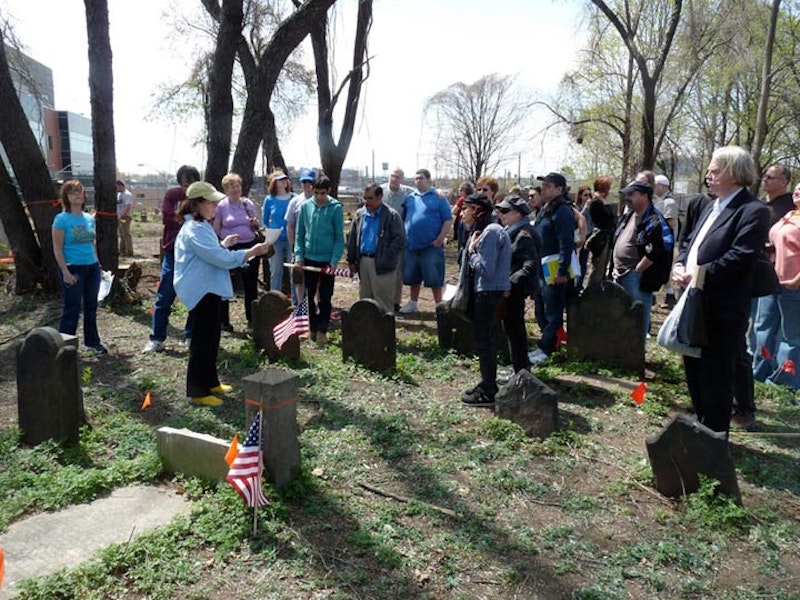 Jamaica, Queens holds a special place in my history as far as my career in New York City exploration goes. I made my one and only visit to the Gertz Department Store in September 1968—it was quite a road trip for our Bay Ridge family. We must’ve trundled out on the J train, a rarely plumbed line for western Brooklyners. It was an elevated line that in those days extended along Jamaica Ave. as far as 168th St. My father was in search of a large furniture wall unit—successfully, since he kept the one we found till he died in 2003. I also remember him repeatedly sending the steak back at a neighboring eatery at least twice. Too much pink. The last traces have been erased of the formerly grand Gertz Department Store, which formerly occupied a building on the south side of Jamaica Ave. between Union Hall St. and Guy Brewer Blvd. The store, established by Benjamin Gertz as a stationery store in 1918, lasted until 1981 when it was consolidated under the Stern’s banner and later, the Macy’s flagship banner.

I recall that my first purchase of a Brooklyn Hagstrom map happened here. That one Brooklyn map led to a collection of hundreds of street maps that I have in milk cartons in a closet here at Forgotten New York headquarters in Little Neck. Most are from defunct or consolidated map companies and were either mail-ordered or purchased at one of NYC’s two major map stores, Rand McNally at 5th Ave. and E. 53rd St., which carried all makes, or the Hagstrom retail store on W. 43rd just off 6th Ave., which dealt with that brand only. Most of the maps of cities outside NYC in my collection are dated, since expressways have been built and downtowns completely “reimagined” since the 1970s. Companies like Champion and Gousha are now recalled only by a dwindling number of street map enthusiasts. I drag them out of the closet now and then, and marvel at their hand-drawn and hand-set beauty and ingenuity.

Back in 1999, when Forgotten New York was just starting out, I visited Prospect Cemetery on the grounds of York College in Jamaica. I’d read an article in Newsday about a woman named Cate Ludlam, the president of the Prospect Cemetery Association, which was then struggling to restore one of the oldest cemeteries in the country, founded about 1668. The cemetery has 53 Revolutionary War veterans, 43 Civil War veterans, three Spanish-American War veterans, and many interments from prominent Long Island families such as the Lefferts. Prospect was designated as a city landmark in 1977. The last interment was in 1988. 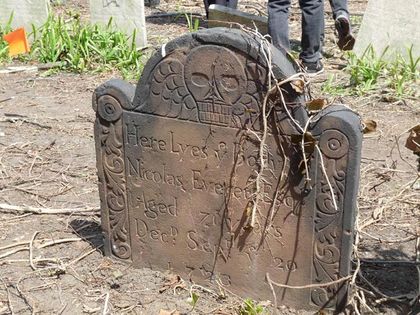 When I first saw it, the cemetery was completely overgrown with bushes, trees and weeds. Cate Ludlam showed me some of the older tombstones, some of which go back to the early-1700s. Made of brown sandstone, the inscriptions on the stones are so legible, you may think they were carved yesterday, but for the vast orthographical changes that have come over English since then, such as the “long s,” and “ye” for “the.”

On my second visit, I was amidst a Boy Scout troop, pulling weeds. However, Boy Scouts pulling weeds isn’t what transformed Prospect Cemetery from a trash-strewn  lot. It was the millions of dollars that Ludlam and the Prospect Cemetery Association raised to clear the grounds and restore the cemetery chapel that her ancestor Nicholas Ludlam constructed in the 1850s as a tribute to three daughters who died young. Periodically, Ludlam offers occasional cemetery tours through the Association, which can be reached at its website. 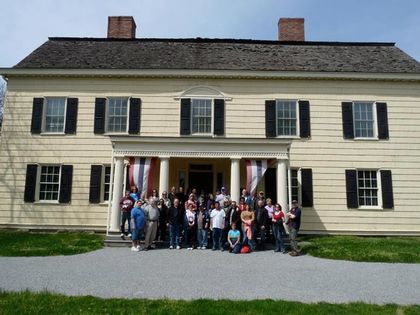 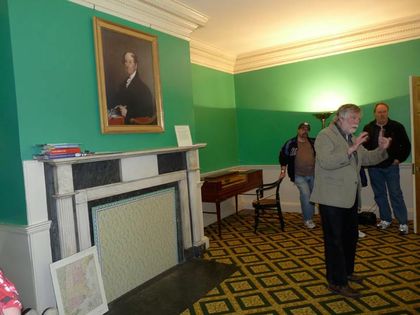 The Rufus King Mansion, more properly, King Manor, stands on Jamaica Ave. and 153rd St. It was originally built in 1730 along the main route to Brooklyn Ferry at the foot of today's Fulton St. In 1805, Rufus King (1755-1827), born in what is now Maine but was then part of Massachusetts, bought and expanded the property to its present appearance. King was a youthful representative at the Continental Congress from 1784-1786, a US Senator from New York in 1789, a Minister (Ambassador) to Great Britain from 1796-1803 (where he impressed the still-hostile Brits after the close of the Revolutionary War), a US Senator again from 1813 to 1825, and ran unsuccessfully for President as a Federalist against James Monroe in 1816. King, an ardent opponent of slavery, argued: "I have yet to learn that one man can make a slave of another and if one man cannot do so, no number of individuals have any better right to do it."

King Manor became a museum in 1992. It features period room settings, including objects owned by the King family; public events and concerts are held periodically. Archeological digs on the grounds have revealed much about life in Jamaica in the early-1800s.

The Manor’s engaging docent is Roy Fox, the resident caretaker and tour guide, who expounded on Rufus King’s role as a Founding Father and opponent of slavery. “Fox,” as he calls himself, is a former radio host and his pipes can still be put to good use. I don’t use the term “resident” figuratively. Fox is one of the luckiest docents of which I’m aware, since he actually resides at the Manor. 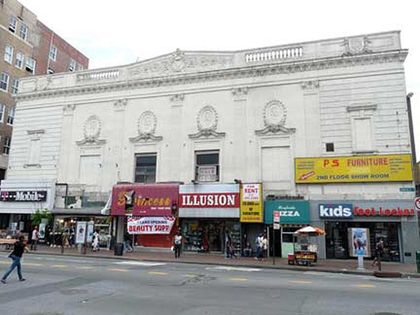 Advertised as “Jamaica’s Largest Playhouse,” the Merrick Theatre at Jamaica Ave. and Guy Brewer Blvd. opened on January 15th, 1921, with a two-day engagement of Paramount’s Conrad in Quest of His Youth, starring Thomas Meighan, which somehow hasn’t turned up on Turner Classic Movies yet. The feature movies were presented with live prologues with “concert soloists and scenic effects.” Music for the entire program, including short subjects and a newsreel, was played by a symphony-sized orchestra, and supplemented by a “magnificent” pipe organ. The Merrick had a complete change of show every Monday, Thursday, and Saturday. Its next feature attraction was Paramount’s Life of the Party, with Fatty Arbuckle. 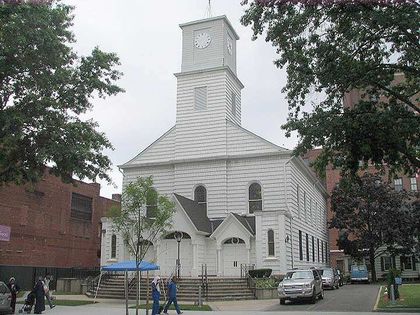 Yet another in Jamaica’s collection of very old church buildings is the First Presbyterian Church at 89-60 164th St., just north of Jamaica Ave. Jamaica’s Presbyterian congregation, founded in 1663, may be the oldest continuous one in the United States. The church is housed in three buildings on 164th, two of them very old.

The original congregation’s stone church stood from 1699 to 1813 at what is now Jamaica Ave. and Union Hall St.; during the Revolutionary War, the British commandeered it and imprisoned patriots. In 1813, it was replaced with what’s now the church sanctuary in a location at Jamaica Ave. and 163rd St.: it was placed on logs and pulled by mule to its present location in 1920.

Presbyterian’s manse, or staff living quarters, was erected on Jamaica Ave. in 1834 and was moved to a location just to the north of the sanctuary, well back from the street, that same year. In 1925, the Magill Memorial Building, a combined church, auditorium and library that also included a gym and bowling alleys, was built just north of the manse.

Jamaica underwent a tough time after the el was torn down east of 120th St. in 1977, replaced by a subway only after 11 years passed. Crime, crack and neglect took over. Jamaica today has recovered somewhat and its historical artifacts, like Flushing’s 17th-century relics like the Quaker and John Bowne Houses, have kept it stabilized. It’ll always have a prominent place in NYC history.