Is Atlas Ever Shrugging?

More than 40 years after her death, there’s less reason to think her work will become part of any “mainstream” in the future. 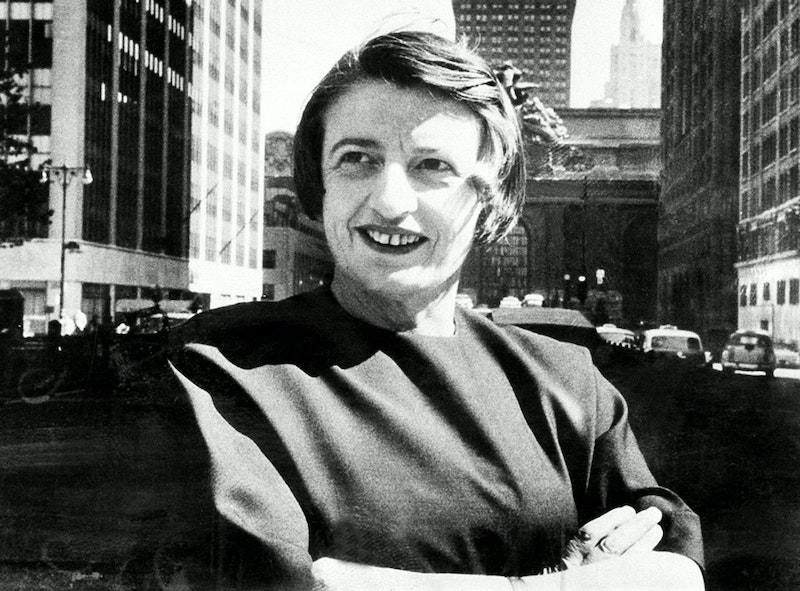 If you know that March 6 is the date of Ayn Rand’s death, you might also know that November 2020 was the 40th anniversary of… any guesses? Although Leonard Peikoff’s The Ominous Parallels: The End of Freedom in America was published in 1982 after Rand’s death that year, her introduction to it is dated November 1980. “Perhaps the best recommendation I can give this book—and its author, Dr. Leonard Peikoff—is to say that it and he are not of today’s cultural mainstream,” she wrote. “They will be part of tomorrow’s.”

Perhaps not. We’re living that “tomorrow,” and there’s less reason to think they will become part of any “mainstream” at any point. The book’s thesis—that America is paralleling Germany’s path to Nazism—is reflected in a popular but accurate paraphrase of Rand’s thought: “The difference between a welfare state and a totalitarian state is a matter of time.” Arguably Rand was right—in reverse: East Germany became West Germany, not vice versa.

A direct Rand quote: “A mixed economy (as I have said many, many times) is an invalid, unstable, unworkable system which leads to one of two endings: either a return to freedom or a collapse into dictatorship.” Bear in mind that “a return to freedom” is Newspeak for an unprecedented adoption of no-taxation minarchism—even though, as writer William R. Thomas observed, “Rand herself recognized that she did not have nor know of a well-developed theory for how government could be financed without taxation.” So, what does it mean to assert that such a fantasy projection is a less “invalid, unstable, unworkable system” than the governments we in the democratic West live under?

Rand’s followers over the past 60-plus years have insisted that her “one of two endings” scenario would play out in the real world. The last great wave was when the Obama administration was met with doomsayers quoting Atlas Shrugged as if it were the Book of Revelation. We’d behold a fulfilled prophecy where, as columnist Cathy Young phrased it, “industries are nationalized wholesale, business people are demonized, and America is overtaken by squalor, ruin and mass unemployment.” The Obama administration ended in a recovery from the recession it inherited.

The Objectivists’ “matter of time” has failed the test of time. Economist Paul Krugman pronounced the correct judgment: “What about the slippery slope from [welfare-state] liberalism to totalitarianism? There’s absolutely no evidence that it exists. Medicare didn’t destroy freedom. Stalinist Russia and Maoist China didn’t evolve out of social democracies. Venezuela was a corrupt petrostate long before Hugo Chávez came along. If there’s a road to serfdom, I can’t think of any nation that took it.” Krugman is incorrect about one thing: Hayek’s classic emphatically didn’t tie the fate of Western liberalism to laissez-faire purity.

Ironically, the “slippery slope” had its own such slope. Ludwig von Mises, doyen of the Austrian school of economics, famously declared our alternatives “laissez faire or dictatorship.” But he allowed for taxation, which Rand condemned as a move down that slope. But she allowed for government, which others soon condemned. One, Roy A. Childs Jr., wrote in an open letter to Rand that her no-taxation minarchism would actually lead to totalitarianism as “just a matter of time.” Our alternatives now: anarchism or Auschwitz. (Note: Childs would later admit he’d never produced a theory “about how free market anarchism would work.”)

And what about Peikoff? In 2010, the intellectual paladin of laissez faire demanded the prohibition of building a house of worship on one’s own property—a failure of Civil Liberties 101. He supported this ban on the “Ground Zero mosque” (as well as one on religious garb: burqas) on the grounds that all the members of a somewhat Semitic demographic constituted a threat to the entire nation.

On a personal level, the importunate anniversary was 2018. In the summer of ‘88, I was at a party thrown by the big macher then in Long Island libertarian circles. While a few of us chatted, the man who gave theme tours of “Ayn Rand’s New York” mentioned an “official” Objectivist event at which someone asked lecturer Peter Schwartz: “How come things aren’t all that bad?” I do remember that we all appeared underwhelmed. More than 30 years after Atlas Shrugged, where was the “squalor, ruin and mass unemployment”? Where was there a hint of the goosesteps Peikoff was predicting?