Ferlinghetti For the Ages

Take a poet out to lunch. 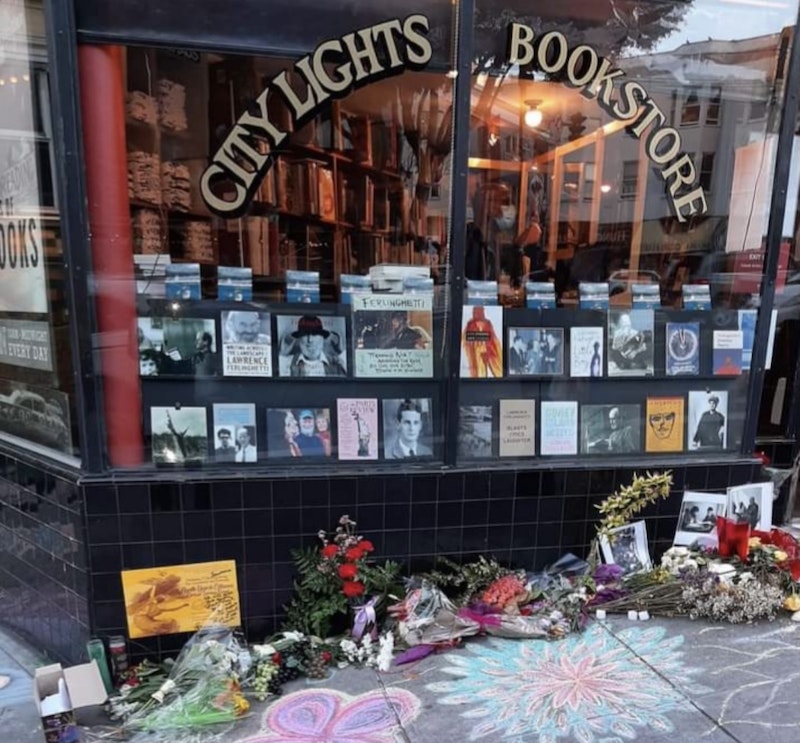 This isn’t a college crash course in poetry or another Poetry for Dummies how-to book. In the words of psychobilly rocker Hasil Adkins, "This ain't no rock and roll show!" Lawrence Ferlinghetti, like his Beat Generation poets, achieved godlike rock star status. He wasn’t an average academic poet. I never knew Ferlinghetti like a close friend, but I felt like he was. Our paths crossed through the years in weird and wondrous ways. I first learned of him, as most do, through his poetry. His first volume of poems, Pictures of the Gone World, and his seminal second volume, Coney Island of the Mind, sealed his renown as an unconventional world-class poet. The book's title came from a short story, "Into the Night Life", by Henry Miller, who, like Ferlinghetti, was a native New Yorker.

In 1953 he founded The City Lights Bookstore on Columbus Avenue in North Beach, San Francisco. Named after a Charlie Chaplin movie, City Lights is the international landmark for offbeat and real beat literary lovers. The rest is pure gold. He published the Pocket Poet Series and New Directions books. The once-infamous poem, “Howl” by Allen Ginsberg, landed them afoul of the law. According to court hearings, his defense of the First Amendment and obscenity charges left him and many others in hot water as easy targets for FBI surveillance and dossiers that dogged his days for the years that followed. What the FBI and the police tried to do was obscene. He was an inspiration. I loved what he did, how he did it, and what he represented.

In the spring of 2020, City Lights Books was ready to close because of the plague but was saved almost overnight by generous donations. At that time, Ferlinghetti was 100. I don't know how he felt about it, but I'm sure he was happy to keep things rolling along. There was a huge celebration, and it seemed like he’d live forever. Ferlinghetti believed in beautiful stuff that right-wing conservatives and evangelicals despise. Unsung heroes and heroines of a counter-culture nonconformist tradition that lays bare our shared societal hypocrisy and dilemma of dreaming in America.

Meeting Ferlinghetti on various occasions at poetry readings and parties in the 1980s and 90s left me with the impression that he was a solitary man. Comfortable in his skin as a poet and man of letters. True to his sentiment, soft-spoken wordsmith in the business of lofty literary pursuits. Yet selfless. He embraced the stoic monk-like quality of altruism for humankind. His success as a force in the publishing world contributes to that concern for the underdog. He gave voice to the oppressed among us like any true poet.

The high price of fame and fortune leaves little up to the imagination. Poets are the rarest and lowest of the breed. Like any group of high-minded individuals having their share of doubters, backstabbing culture vultures, haters, and detractors abound, a wild bunch of mocking top bananas and petty-ante purists. Unwilling heirs are apparent to the spoken word. As he humbly said, "I was the guy tending the store." Like a gardener watering his crops. A bunch of poets grew up in his bookstore garden.

The lofty academics can perch in Ivy League towers spreading disdain for the lowly poet. Truth and beauty be damned. Let them bang their fists on the podium of intellectual snobbery and poetic privilege. It leads nowhere. Let beatniks and bohemians sit at the table too. We need instigators to stir the pot and smash pompous religious zealots. Tear down the barriers of pretentious political puffery.

Remember Lawrence Ferlinghetti for the gifts of poetry, artistic freedom, fantastic literature, and paintings he left behind. Take a poet out to lunch, not for granted. Long live poets.