Waiting for the Major League Baseball bubble to pop. 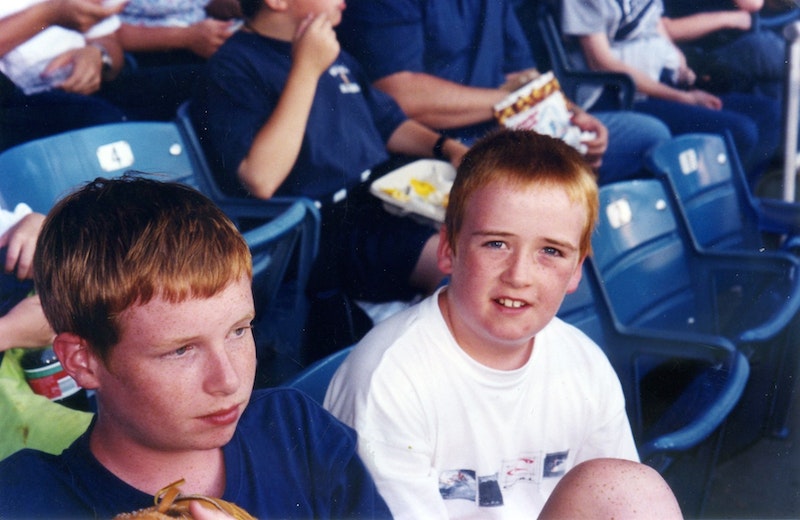 Like most dedicated Boston Red Sox fans, the New York Yankees—whose “Evil Empire” moniker has endured—brings out the worst in me. Disgust, paranoia, disbelief, irrationality, ugly belly-flops on the rare occasion I watch the franchise’s publicity organ YES, and the ongoing deification of now-retired Derek Jeter. Last Sunday, while the Sox were in the process of losing to a junkball Seattle pitcher, grounding into four double plays, and the Yanks defeated the Oakland A’s, I texted a friend saying that it was imperative that Aaron Judge, Dellin Betances, and Aaron Hicks go on the 60-day Disabled List immediately. He responded, “For starters!” Back and forth we went, and I immoderately texted, “Empire charter plane explodes in mid-air,” followed by “Too rude”? Implying I was wimpy, this native Bostonian said, “Who cares about rude?” Trying to level the exchange, I suggested, “But what about the players’ children?” He was having none of it: “Fuck them. They’ll get over it. And they can spend their inheritances on meth and hookers for all I give a shit.”

Heat of the moment. While Sox baseball is an engaging (my wife would say consuming) six-month diversion, my friend and I aren’t that villainous. Still, as I’ve noted before, the only thing about the season I care about is the Sox winning, and if that doesn’t happen, that the Yankees lose. Period.

That said, I was fairly surprised to read a long New York Times business story last week by Billy Witz, headlined “Winning Yankees Aren’t Faring Nearly as Well at the Ticket Office.” This pops out: “But even those selling points [first place in the A.L. East, new “Bunyonesque outfielder Aaron Judge”] have yet to turn around attendance at Yankee Stadium, where ticket and suite revenues through last season had fallen by a staggering $166 million since the end of 2009, the year the Yankees christened the new ballpark with their last World Series title… And despite the team’s compelling play this season, attendance through the first quarter of their home schedule is down from the same point last year… The Yankees’ per-game decline of 3,793 over the same number of games last season [as of May 23] is the third-sharpest in baseball, trailing just Kansas City and the Mets.”

I don’t find this good news, partisan though I am. On the surface, it’s cheering that the Yanks’ arrogant price-gouging has earned well-deserved disrepute—as someone who grew up on Long Island and remembers the original Yankee Stadium (and then its renovated version), which was a classic on the level of Fenway Park and Wrigley Field, the new park is tawdry and claustrophobic, with flashing advertisements, too-loud music, and a headache-inducing Jumbotron—so the Steinbrenners’ discomfort is fine by me. Yet, as Witz mentions, this is a harbinger (we’re beyond the wake-up call stage) for MLB teams across the country, since the sport’s aging demographic spells trouble in coming years. The Yankees have been forced to discount the price of some tickets—unimaginable when the new park opened—and cater to the desires and habits of Millennials, the young men and women who are confounding not only sports franchises but once-unassailable other industries as well—like publishing, fast-food restaurant chains, and traditional television companies.

Goddamn Millennials. Joshing! In reality, it’ll be the next generation, whatever it’s called, that’ll really turn business upside down. When I go see a game, whether at the Orioles’ Camden Yards, Yankee Stadium, or Fenway Park, it’s not as if there’s a dearth of people under 30 in attendance. It’s the attention span, big surprise, that’s taken a hit, not unlike the nearly vanished practice of buying a scorecard from a vendor and putting pencil to paper. (Which always struck me as odd, even as a kid, since the results were in the next day’s paper, and it required such single-minded determination.)

Attendance, at least for the flush teams, is just one avenue of revenue, with a real bonanza in recent years coming from TV deals. Problem is, that bundle of dough, which helps finance huge contracts for free agents and extensions, is on the cusp of blowing up. I watch as many Red Sox games as possible, pitch-by-pitch, but I’m not in the demo—in fact, what demo exists for men in their early 60s, aside from prescription medicine?—that sports franchises are trying to reach. Owners want their parks filled with teenagers, young adults, and concession-buying families who fork over sky-high prices for ice cream, soda, and team-friendly paraphernalia. And a couple of beers for the harried parents busy keeping the offspring away from railings and wandering away.

It’s a ways off, but not difficult to imagine that at some point sports stadiums and arenas could be tagged with that dreaded term “bricks & mortar” and slide into niche territory.