From Robert Gair to the Shake Shack. 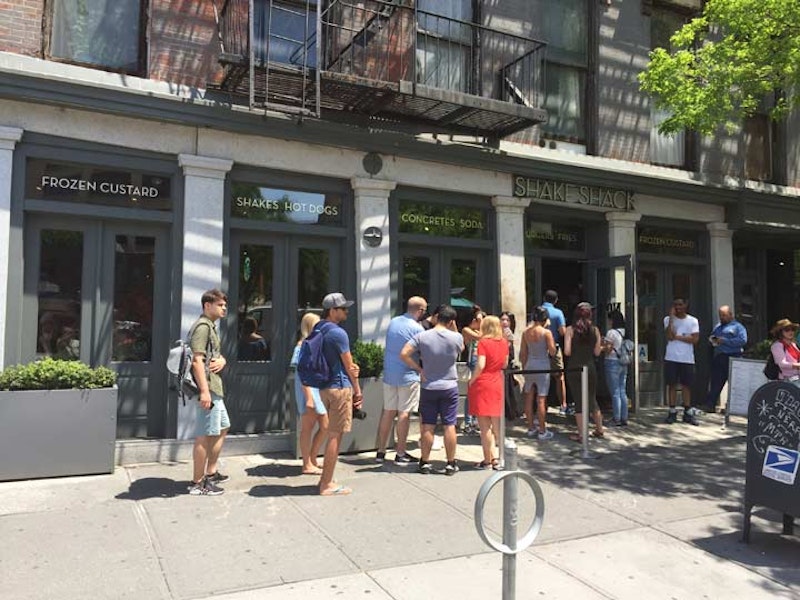 A busy lunchtime crowd waits for seats at Shake Shack at Old Fulton and Water Streets in DUMBO.

I’ve been fascinated with Brooklyn’s DUMBO ever since I saw it on old street maps as a kid and wrote down the tiny streets that I saw such as Talman, Everit, Evans, Mercein, Flint, Green Lane, Little, Howard Alley, and many more. The maps I studied back in the 1960s and '70s were printed in the 1940s and '50s, before the Brooklyn-Queens Expressway and Farragut Houses were built, and most of the streets I listed have been eliminated. Visiting DUMBO on a bicycle beginning in the 1970s didn’t disappoint, as on the weekends I found a grid of streets with little to no connection with other Brooklyn neighborhoods with the exception of Fulton Street, which in my lifetime has changed names twice to Cadman Plaza West in the 1960s and to Old Fulton Street in the 1980s. I also found acres of tall brick and stone-clad buildings, all homes to importers, manufacturers, and warehouses, and railroad tracks of a recently-retired local line, the Jay Street Connecting Railroad, which brought goods from these buildings to East River carfloats and back.

The Rapelje family were the first Europeans to settle in the area, negotiating riverside properties from the Canarsee Indians in 1637, and the land stayed with the loyalist Rapeljes until the post-Revolutionary War period when it was seized by New York State and sold to the financier Sands brothers, Comfort and Joshua. They proceeded to lay out the present street grid and name the streets in the village they initially called Olympia.

After the steamboat became widely employed in the late 1810s, DUMBO became a major industrial area because of its convenient waterside location, the availability of large plots, and the depth of the East River which allowed large ships to tie up at its docks. Raw materials could easily be shipped into the area’s factories and finished goods easily shipped out. The Connecting Railroad was built between buildings and the docks, which evolved into carfloats.

With shipping shifting to New Jersey’s container ports in the late 20th century, much of DUMBO’s major manufacturing moved out and its large buildings filled with small offices, warehousing, and small manufacturing. In a typical gentrification pattern, art galleries arrived in the 1980s, followed by increasingly expensive residences, and then retail spearheaded by developer David Walentas, whose conversion of the Clock Tower Building at 1 Main Street, formerly the seat of Robert Gair’s box and paper products empire, was widely praised. 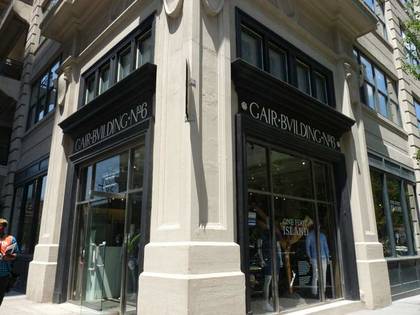 I worked for a few months in DUMBO in a converted Robert Gair loft at an educational publisher, Amplify, in early 2015; former NYC Education Chancellor Joel Klein was the CEO at the time and I’d see him in the elevator and in the halls. It was a cold winter and in late March, when it got warm enough to roam around, I would walk over to Water and Old Fulton and order a meal at Shake Shack. I had patronized the very first Shake Shack in Madison Square while working in the area in 2005; lines tend to snake around the square in the warm months because of its popularity. In 2015, the DUMBO Shack had dinnertime customers, but wasn’t overwhelmed.

Cut to 2017, during the first hot day in May—I thought I’d hit the Shack again for lunch, but my hopes were dashed quickly since I saw a line down Old Fulton Street, resembling the Shack lines in Madison Square. DUMBO itself was busy as seemingly never before—tourist crowds had descended on it as early as the pre-9/11 era, as its bridge views and Manhattan views are unparalleled. But DUMBO has never been as clogged as it is these days.

DUMBO’s shift has accelerated in recent years, but Robert Gair was the dominant industrial presence in DUMBO in the late nineteenth and early twentieth century. Gair was born in Edinburgh in 1839 and came to America at the age of fourteen. He worked as a clerk in a dry goods store in New York City before serving in the Civil War (he reached the rank of captain). In 1864 he opened a business as a paper jobber in New York and then, in partnership with George West from 1867 until 1876, he began manufacturing paper bags with square bottoms. He also sold a wide variety of paper goods, many of which he also manufactured on machinery that he had constructed. However, it was Gair’s inventions relating to the manufacture of corrugated paper boxes that resulted in his firm’s growth. In 1870, Gair developed a machine for manufacturing corrugated paper and in 1879 patented a machine for creating folding boxes.

In 1888, as production grew, Gair moved his production from Tribeca to DUMBO. Gair’s choice of a site on the northwest corner of Washington Street and Water Street was influenced by the recent move of his friend, coffee roaster John Arbuckle, to neighboring blocks. Robert Gair increasingly invested in real estate and became a major developer of industrial buildings in DUMBO, some of which his firm occupied and others which were leased.

By the time of Gair’s death in 1927, though, operations were largely moving elsewhere out of DUMBO and were gone by WWII. The buildings have been leased to other manufacturers since that time and have now been converted to mixed use residential, offices, and retail. 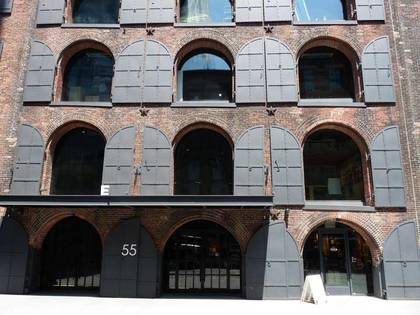 Brothers John and Charles Arbuckle were the first national retailers of coffee and produced America’s first national coffee brand, Ariosa, which remains available, complete with a traditional piece of peppermint candy in the bag; the Arbuckles were also sugar importers, and early on, they kept their coffee from getting stale by glazing it in sugar. One of the Arbuckles’ leading creations was Yuban Coffee, introduced in 1913, a year after founder John Arbuckle’s death. Yuban (“Yuletide Banquet,” produced from special beans used by the Arbuckles during family holiday gatherings) had a vast advertisement on the exterior of 1870s-1880s-era warehouses along Water Street, known as the Empire Stores (pictured above) in the 1930s, memorialized in photographs by the famed Berenice Abbott.

In recent decades, the Empire Stores remained a hulking, vacant presence facing both Water Street and the new East River Park, but they are now in the midst of a redevelopment that have given its arched windows new glass and new metal shutters. A pricey furniture store, West Elm, has moved in, as well as FEED, Lauren Bush Lauren's (granddaughter of “41” and daughter of “43”) project selling apparel with a café, whose profits go to purchase meals for poor families worldwide. A branch of the Brooklyn Historical Society was also set to occupy space on the second floor. To me, it was quite the shocker to wander in to the old hulk and find a desk and a concierge!

The former tobacco warehouse at Water and Old Dock Street, originally built by the Lorillard tobacco producing family around 1860, sits opposite Empire-Fulton Ferry Park, just north of the Brooklyn Bridge, and just south of the Empire Stores. Together, these landmark 19th century warehouses are vivid reminders of the shipping activity that once defined the downtown Brooklyn waterfront. Constructed in the 1870s as a tobacco customs inspection center, and saved from demolition in 1998. The building was used as a hideout in the 1990 Abel Ferrara film “King of New York.” 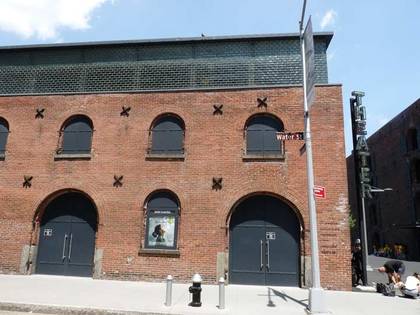 A few years ago, the building was a hollow shell, and I meandered inside only to be shooed out by a security guard. Today, it’s been enclosed, its metal shutters echoing those of the Empire Stores next door, and is now a performance venue, the St. Ann’s Warehouse Theater. 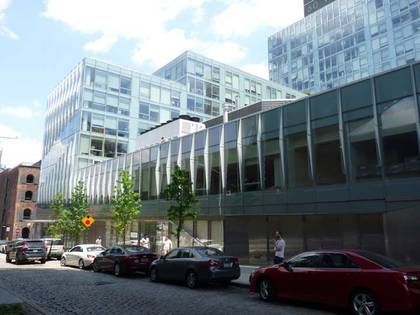 Many preservationists think that only older or architecturally compatible buildings should go in traditionally historic areas; it’s quite a jolt to see armies of green glass boxes invading Long Island City and Hunters Point. I think, though, that the glassy Dock Street School, part of a condo project (another Walentas family development) serving students in Grades 6, 7, and 8 is an exception and tends to complement the brick Empire Stores and Belgian-blocked Old Dock Street. 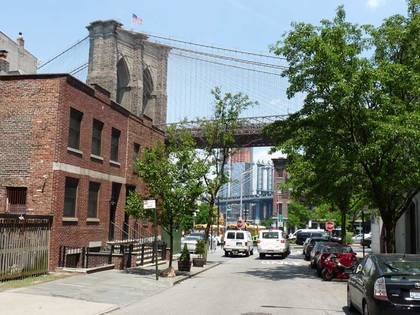 Two bridges peek out in this view of Everit Street from Doughty, two of DUMBO’s shorter routes. When I first saw the neighborhood in the '70s, the area was quiet as a grave on weekends. The Fulton Street El once clattered to the waterfront, which ran a ferry between Brooklyn’s and Manhattan’s Fulton Streets for over a century; el and ferry were replaced by subways and buses. The only sound I heard was the thrum of traffic running on the Brooklyn Bridge. The Belgian-blocked streets and exposed railroad tracks reminded me of Baltimore’s Fells Point, where I stayed on a late 1990s visit. Fells Point was replete with restaurants and bars, including one featured in the TV show Homicide. I always wondered what DUMBO would be like if some restaurants and attractions were brought in—back then, there was only the East River Park, run by New York State on a tiny boardwalk underneath the bridge. Security guards would make me get off my bicycle. These days Brooklyn Bridge Park’s several new sections wrap all the way down to Montague Street and all the way east past Jay.

The development cat is out of the bag, the horse out of the barn, and DUMBO has gone all-in as a wealthy enclave that hosts hordes during the warm months, especially the Shake Shack.