MLB’s nastiest rivalry is now the Red Sox and Orioles. 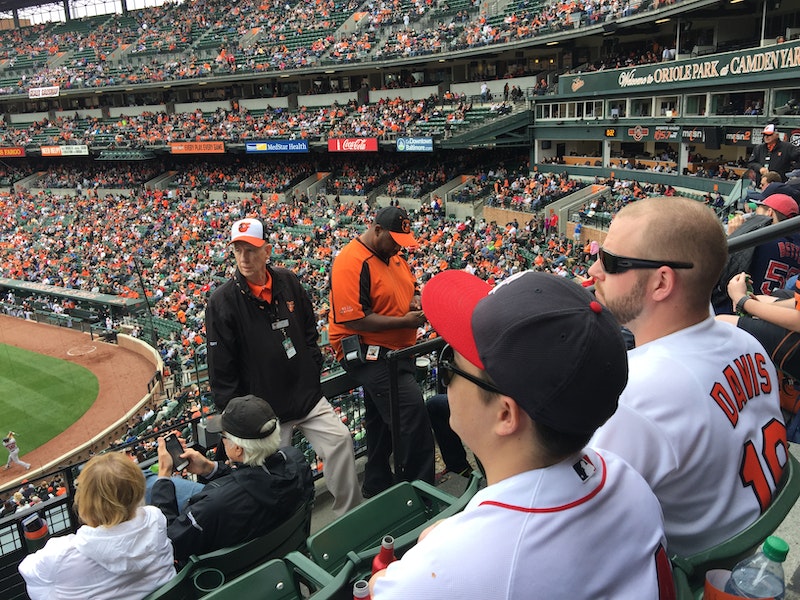 There’s a dodgy predicament about attending Red Sox-Orioles games in April at Baltimore’s still-splendid Camden Yards. You know the game will draw at least 35,000 people, so it’s essential to buy tickets a week in advance. On the other hand, the weather is so unpredictable, that you might take a bath (and seats are not inexpensive) if it rains, especially if you don’t want to wait out hour-long delays. But last Sunday we plunged ahead, and with the Sox’s two pathetic losses on Friday and Saturday (I’d say Boston’s knuckleballer Steven Wright is kaput), I was half-hoping for rain, but the sun came out and the family and I got to the ballpark just in time for the first pitch.

Electric, and-how! The first four batters for Boston got hits off the O’s Kevin Gausman, including homers by Mookie Betts and a crusher from Hanley Ramirez, putting up a four-spot before the O’s batted in the bottom of the first. The first game you attend in any given season isn’t routine: it’s fun to see familiar ushers and vendors and wave hello. There’s an older fellow who had a tracheotomy several years ago, and it was a relief to see he’d survived the off-season. After the first inning, the game lumbered along—though the anticipation that O’s thuggish but gifted third baseman Manny Machado, who slid hard into Sox de facto captain Dustin Pedroia Friday night, forcing the former MVP to leave the game clutching his leg, would get drilled for the perceived dirty play was on the minds of most knowledgeable spectators—as Eduardo Rodriguez, maddeningly inconsistent, set down O after O, and the Sox didn’t add on until Mitch Moreland went yard in the fifth.

It was a rowdy and curious crowd, at least in our favored Section 246. I couldn’t figure out the two very amiable fans next to me: the lady was an O’s fan, but not vociferous, clapping softly when the O’s recorded an out. Her companion was more vocal, hooting and hollering, but cheering on both teams. Could be he’s just a fan of the game in general—sort of like my beloved father-in-law—and that’s a concept I simply don’t understand. Flipping switches, there was a trio of teenaged girls two rows in front of us, soused by 2:30, who didn’t pay attention to the field action but were plenty loud, nattering about this and that, none of which I could comprehend. I did get cheesed off when one of them waved her paper menu in the air for five minutes, trying to signal a vendor for seat service, a transgression that not only blocked my view, but was rather rude to the guy ferrying nachos, beers, and dogs to spectators. I mean, the man’s working like a dog in the stands, he’s not a fucking butler for some entitled brat who, I semi-maliciously hoped, puked prodigiously in the john later in the game.

These two teams don’t like each other much—despite the current era’s fraternization between opposing players, so different from when I grew up—and that’s no doubt because they’re both usually pretty good and compete to win the AL East. For as long as I can remember, it was the Red Sox and Yankees who had the historic rivalry (my apologies to Midwest and Western teams who have similar battles, but I don’t concern myself much beyond the American League, and the East in particular), and no doubt that’ll resurface, but for now it’s Boston and Baltimore. The O’s manager Buck Showalter, a tight-ass taskmaster constantly needles—or whines about—the Sox and his nearly equally uptight counterpart John Farrell. Pathetic O’s announcer Gary Thorne despised David Ortiz, and that’s emblematic of the two teams’ mutual antipathy since around 2011, when the Orioles knocked out the Sox from the playoffs on the last day of the season.

As for the Machado/Pedroia jazz, while I still enjoy a good dust-up on the field—admittedly, a preference dictated by age, remembering when Don Drysdale or Nolan Ryan would plunk a batter for looking cross-eyed at them—when Sox reliever Matt Barnes (since suspended) chucked a fastball close to Machado’s head in the eighth inning that was beyond the pale. O’s Hall of Famer/announcer Jim Palmer, a good guy, tweeted a picture of the tragic (and accidental) beaning of Tony Conigliaro in 1967, which ruined the budding superstar’s career, save one weird season a few years later when he hit 36 homers. Tony C. never recovered, and died young, after a heart attack and stroke in 1990.

I did find it rather ludicrous on Saturday morning when O’s fans took to Twitter to denounce the Red Sox as crybabies, forgetting that their front-office chief Dan Duquette, during the off-season, gave a fishy reason for not attempting to acquire the Blue Jays’ Jose Bautista (“he’s a villain in Baltimore”)—who’s had run-ins with the O’s, admiring homers, the usual showboating—saying the Baltimore fan base wouldn’t support the move. As if that’s ever been a consideration for a front office. Peter Angelos’ Orioles are a notoriously cheap organization, but had they signed Bautista—who’d only add to the team’s already stacked lineup of steroid-era home run hitters—he’d be a fan favorite if he delivered.

As for Pedroia apologizing to Machado after the Barnes’ near-miss on Sunday, it doesn’t bother me much. Pedroia’s the leader of the team—and likely would want to return to the days before all sorts of rules were imposed—and is a heat-of-the-moment player, but isn’t exactly Mr. Articulate. There was some immediate buzz on Twitter that Pedroia deserted his teammates, but I doubt that’s the feeling on the club. It’s just a shame Ortiz wasn’t around to officiate (or, more importantly, take his old DH slot).