I came home from ReasonCon3 feeling like I belonged. 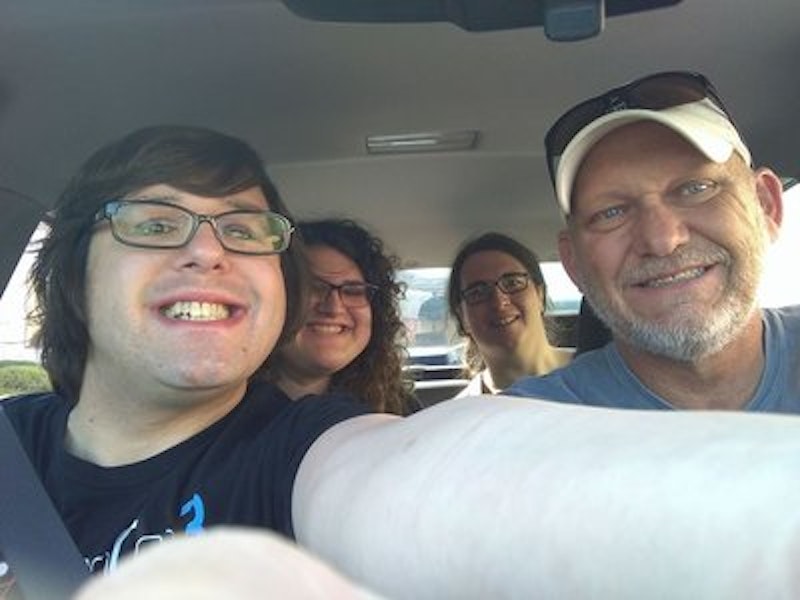 I didn’t expect to be a podcaster. After co-hosting the progressive Christian podcast Something Beautiful for two years, I got burned out and decided to hang up my headphones and stick with writing. Things changed in 2015, however, when I asked blogger Alex Gabriel for a blog interview. He wanted to do it through Skype, but I was too lazy to transcribe the conversation, so I started the Bi Any Means Podcast. I still didn’t consider myself a podcaster, though, until I started getting more guests and eventually joined a Facebook group for atheist podcasters. Turns out not only did people like what I was doing, but that I became part of a large family.

The first time I realized this was at Reason Rally 2016. It was my first atheist gathering, and also the first time traveling and staying in a hotel room by myself. On the night before the rally, I met podcasting friends in person at a bar, and it was surreal. Everyone that I’d just listened to week after week suddenly became real people. Not only that, but they actually wanted to talk to me. How’s that possible? I’m just some schmuck in Easton, MD with a nasally voice who has a handful of listeners. It was the first time I felt accepted at the popular kids’ table, and didn’t get any sleep that night because I was trying to process everything. That sense of acceptance continued the next day during the Rally as I met more atheist activists who not only recognized me, but also let me know I was one of them. I came home from that weekend feeling like I was no longer the Token Freak; I was part of a family.

Time passed. I went through bad periods of depression and anxiety as I continued my gender identity self-discovery journey, and it didn’t help that Donald Trump won the 2016 election. Fortunately, I had one thing to look forward to in 2017: ReasonCon3. ReasonCon is a semi-annual conference (they skipped last year due to the Reason Rally) that focuses on the atheist podcast community. I knew it was going to be a great chance to see all my friends again, but I didn’t know that everything I felt during Reason Rally would return 100-fold.

My friend Marissa from the Inciting Incident podcast picked me up around five Thursday afternoon and we drove with three other people down to Hickory, NC. We arrived at the hotel at 2:30 a.m., but I hardly got any sleep because I couldn’t wait to meet everyone. That worked to my advantage because when I stepped outside for a morning cigarette, I ran into some of my old friends from Reason Rally and was invited to breakfast. As the day progressed, more people started checking into the hotel, so I spent the entire afternoon reuniting with old friends and meeting some of my favorite podcasters in person for the first time. The highlight of Friday afternoon, though, was finally meeting my Biskeptical Podcast co-host Morgan in person.

The day ended with a banquet officially kicking off ReasonCon3. The highlight was when they awarded Samantha “Sami” Bannister (whose father, Jeremiah, co-hosts PaleoRadio) a posthumous 2017 Champion of Reason award. I never met Sami, but knew about her and how she inspired so many people before her death last year from cancer at 12. They played a tribute video of different atheist activists like Seth Andrews and David Smalley sharing their memories of her, and also a video of Sami giving a presentation about her mixed feelings over people praying for her. We all cried as we remembered a member of our family who is no longer with us, but left a lasting impact.

Saturday was devoted to speakers, and while there were some great talks, the highlight was when Callie Wright of The Gaytheist Manifesto proposed to her girlfriend Celes. We all got out of our seats and cheered and cried as we celebrated the love they have for each other, which is a love I rarely see in anyone else. ReasonCon3 wasn’t all mushy stuff, though; God Awful Movies did a live show that night that left us all laughing. Then came the after party where we all drank, hugged each other, and celebrated our sense of community. We were in a safe space where we could truly be ourselves and not be judged.

As I rode home that Sunday, I thought about everything that had happened and started feeling emotional. I felt like I didn’t deserve any of the love the conference gave me, and that I was a phony. I’ve felt like a freak for so long that I decided at an early age there would never be a place at the table for me. I even found myself a few times during the conference trying to find anything that would disqualify me from being part of the group. But I didn’t have to have a certain number of podcast subscribers to be included in the family. When I finally arrived home, I started crying. I wrote a message on my Facebook wall thanking everyone for allowing me to be a part of something beautiful, and that I didn’t deserve anyone of it. One of my friends, Ashley from No Religion Required, left a comment saying, “Trav, you are family.” It might take me a while to get used to, but I know she’s right.