A Defense of Florida

I haven't found any weirdness there yet. 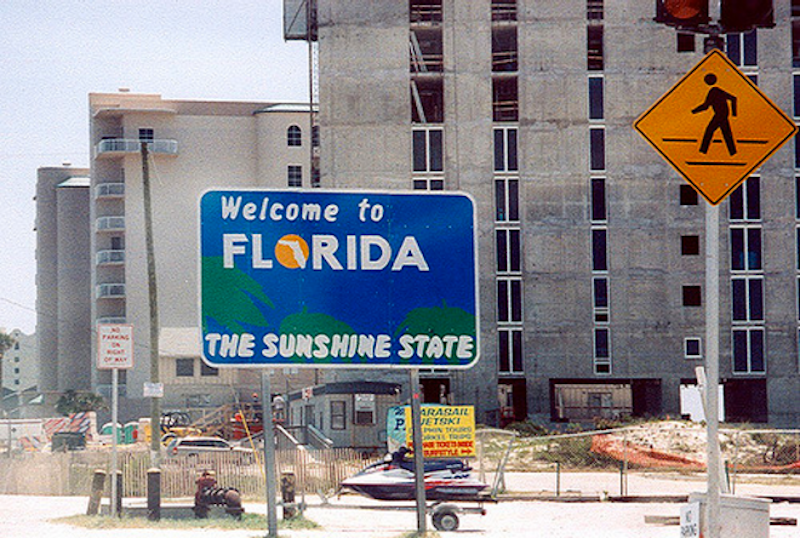 A man was spotted jumping off a bridge with stolen sausages. Another was eating pancakes in the middle of a crosswalk, as if he was in a booth at Denny’s. You know where this happened—Florida. New Jersey takes a lot of crap, but no state gets dumped on like Florida. All you need is some preliminary details on the latest example of consenting-adult depravity and you don't even have to ask where it happened these days.

How Florida has reached this state of affairs, only a full-length book can begin to explain. It seems like every other day some Floridian is trying to kill their roommate for changing the radio station when their favorite Brad Paisley song is on, or cold-cocking the pizza delivery guy because he forgot the garlic knots. When it doesn't cross the line to brutality, it's funny, but the people laughing don't have any real idea why Florida's become Freak City. The best people to ask would be those who’ve lived there for decades. They could surely tell some stories.

Not that long ago, Florida was just a nice place to escape the cold winters of the northeast, where I was brought up. My first thoughts on Florida that were based in real-life experience came from my grandmother, who used to travel there from Auburn, New York every winter. She detested cold weather, and refused to endure winter's entirety each year, despite having five children at home. My grandfather, who she didn't invite to accompany her, was left behind to attend to domestic affairs while she checked out the dog races and worked on her tan for a month or so. Florida wasn't weird then. It was mostly just invitingly exotic.

Hedonists are attracted to the sunshine, but their id often leads them to dark places. The weather's always warm in Florida so, barring the occasional hurricane, these voluptuaries are rarely constrained by nature from leaving their homes to pursue the “anything goes” approach to life they favor, which often goes haywire and ends up getting picked up by the Florida news aggregators once law enforcement intervenes. West of the Mississippi, people have historically fled to California if their past had prompted them to seek a fresh start. In the east, Florida's that place. When you arrive there, just as in California, you’ve reached the end of the line.

That's my theory, but there are plenty more to choose from to explain Florida's craziness. I've been there many times, but have never experienced that side of it. There's a hint of it in the back pages of the local newspaper I’ll pick up—the alarming number of strange sex crimes, for example—but that's all I see. I go to exactly the same place every winter, Venice, which is about 20 miles south of the pleasant, fun city of Sarasota. Perhaps that's my secret. Inland is where the darkness is to be found.

Venice is a quiet town on the Gulf of Mexico. As soon as I get off the plane in Sarasota, I start to relax. It's winter, and the warmth’s a relief. It's flat too, so I don't feel cramped in by any topography. Venice has a main drag, the Tamiami Trail, where all the mini-malls are located, and it has a downtown, which is a little touristy but still charming. In downtown Venice you can see guys in the insurance business from New Jersey drinking red wine at 10:30 in the morning in January, because they're on vacation and they want to make the most of their week away from the office. There's plenty of good red wine to be found around Venice at some nice Italian restaurants. That's another bonus of Florida for me. Given a choice, I'll always settle for Italian food and wine, but it's hard to find in Richmond, Virginia, where I live.

The condominium complex I stay at has a small golf course. Later in the day, before dinner, I can sneak onto the seventh hole and play it a few times to build up an appetite. Before that, I'll bike to the beach with a book, and maybe get a hot dog at the beachside stand. There's a restaurant right on the beach called Sharky's on the Pier, but it's such a hotspot I haven't been able to eat there in years, even if I go at three p.m. That's fine, because if I want a late afternoon drink right on the water, there's a number of places inland on Roberts Bay. It's easy to find a casual spot later on for a nice seafood dinner—preferably grouper—right on the water too. It might even have a tiki bar right next to it.

These are my simple annual pleasures in Florida. A week every winter works wonders. I’m not around anyone's dog shooting his girlfriend or a guy hiding from the police in a trashcan. This is another Florida, not my own. I like to imagine I'm in the Florida my grandmother used to go to, and I'll keep right on going back there every winter just like she did.