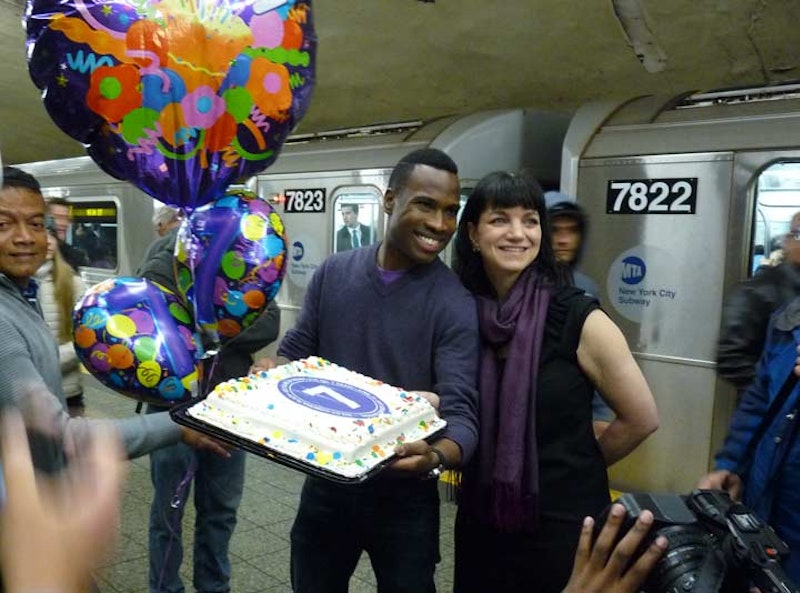 April 21, 1917 was a banner day in Queens. The Corona Elevated Line, known today as the Flushing Line, or more simply the #7 train, opened between Queensboro Plaza and Corona Plaza at Alburtis Avenue, or today’s 103rd Street. After a one-stop beginning in 1915 between Grand Central and Vernon-Jackson Avenues, the line had been extended east in a tunnel to Hunters Point Avenue and on an elevated to Court Square the following year.

The elevated was literally thrown across what were farms and cornfields when construction began in 1913 through rural Sunnyside, Woodside, what was known as Trains Meadow but is now Jackson Heights, and into Corona, which was originally a settlement called West Flushing and named for the already-established Queens community. In 1917, Queens was just beginning to emerge from a rural state in the western end of Long Island, increasingly urbanized after its 1898 merger with Greater New York. A more intimate connection with Manhattan was created when the Queensboro Bridge (or 59th Street Bridge, or Ed Koch Bridge; it seems to accumulate names like traffic jams) was opened in 1909.

In this formative era Queens existed as a group of small towns and a trio of substantial cities, Long Island City, Flushing, and Jamaica, separated by farmland, uncultivated tracts, and farm-to-market roads (one of them, Farmers Avenue, still exists today, even after it was changed to a Boulevard in the 1920s). The overall grid was later built new or extended from what existed already. 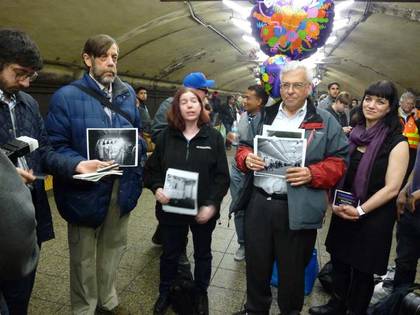 Pictured above are subway historians Joseph Raskin (author of The Routes Not Taken, an examination of unbuilt NYC subway routes), Jodi Shapiro (Associate Curator of the NYC Transit Museum), Andrew Sparberg (author of From a Nickel to a Token, which chronicles the unification of the IRT, BMT and IND systems to today’s integrated subway), and Access Queens’ Melissa Orlando. The four of them are holding historic photos of the #7 line.

The opening of the Corona Elevated began the great shift in Queens from rural to urban. From the beginning, its engineers grasped its importance. Squire Vickers, the man responsible for much of the NYC subways’ look and feel between 1908 and 1940, designed a vast concrete viaduct running down the center of Queens Boulevard between the 33rd (Rawson) and 46th (Bliss) Street stations, with tasteful terra cotta ornamentation, to carry the line in style. This treatment has not been extended to any other elevated line in the city (some stations deemed important on other lines have been concrete-clad).

Almost immediately after April 21, 1917, a transformation began to take place. Streets were cut through, and developments like Sunnyside and Phipps Gardens sprung up. The Queensboro Corporation began constructing its vast residences in the newly-minted Jackson Heights (Northern Boulevard was still called Jackson Avenue when development began). One and two-family houses were constructed along streets that had newly assigned numbers—the Queens Topographical Bureau had devised a new numbered Queens street system.

And even after 1917, the line continued its growth—west to Times Square in 1926, and east to Flushing’s Main Street in 1928, bequeathing the line the name it has carried since. In 1999, the Queens Boulevard viaduct was redesigned and its stations rebuilt, with the late Yumi Heo’s stained glass panels “Q Is for Queens” depicting a Queens scene for every letter of the alphabet. Some are esoteric: D for the Dragon Boat Festival in Flushing Meadows in August, or O for the Onderdonk House, a colonial-era dwelling on the Brooklyn-Queens line in Ridgewood. The Flushing Line was extended west once more to the Hudson Yards residential development in September 2015. 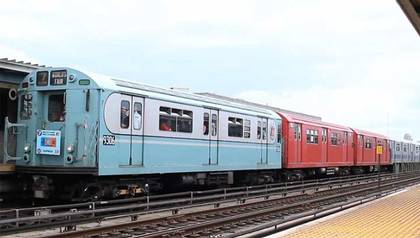 On April 21, the Metropolitan Transit Authority joined with Access Queens, an advocacy group that lobbies for improved service on the Flushing Line, to celebrate the centennial with an appearance by Jodi Shapiro, who brought along a trove of photos depicting the line’s formative days, and a running of the so-called Train of Many Colors at approximately 2 PM, the same time of day of the original run. A large cake featuring the purple 7 bullet was presented, and many in the crowd, which numbered about 50 transit buffs, wore purple; the #7 is the only line that uses the royal color. 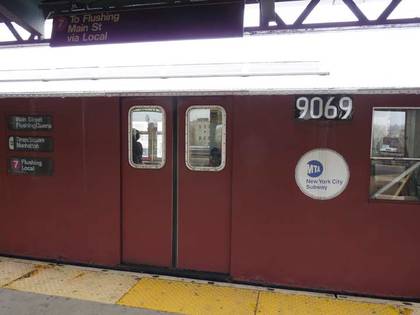 Above is the exterior of R-33 car #9069. This car was used on most IRT lines as well as the Flushing Line. R-33 cars built for World’s Fair transport were special editions with large picture windows: the line runs mainly on an el. 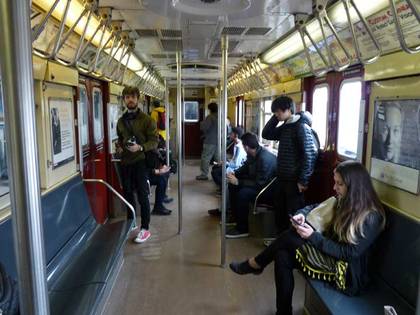 Above is the interior of one of the R-33 cars. In comparison to the R-188 cars used on the line today, the R-33, introduced in 1962, was bare-bones with no digital readouts announcing the time or next station, and no pre-recorded announcements. Still, these units got the job done on the #7 for decades until their retirement in 2003.

While the centennial celebration is over, visit nycsubway.org as well as accessqueens.org for much more on the Flushing Line, including historic photographs, line history, and in the case of Access Queens, a “survival guide” providing details for each station—as well as alternatives when service is suspended.