Everyone’s a real or imagined sinner. 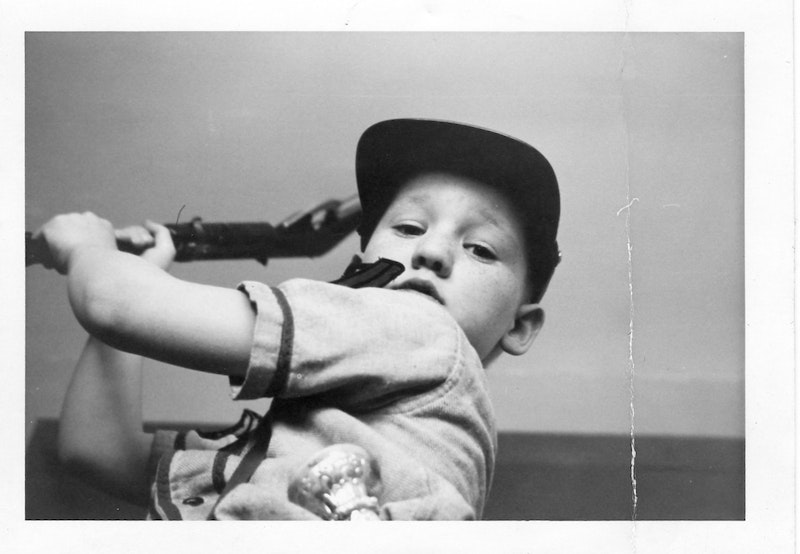 It’s hardly unusual for people, once they reach early adulthood and then beyond, to occasionally take stock of their lives, re-living past transgressions that, with the passage of time, may loom larger or are just relegated to a store of memories. When I was a kid—in the above 1962 picture, seven—I often played “soldier,” a fairly common pastime in that era. Perhaps because World War II had so recently concluded, and the scary reality of the Cold War was ever-present even for the young, I opted instead for the Civil War. Funny thing is, as I look back, was that I always dressed as a Confederate soldier—perhaps the various Herald Tribune Civil War Centennials seeped into my brain—even though I lived on Long Island, and had never traveled to the South or even seen a Confederate flag up close. I did like watching re-runs of The Rebel, a short-lived series starring Nick Adams (who overdosed on prescription drugs in 1968), and thought he was pretty cool. As was the Johnny Cash title song.

It’s not as if I wanted to join the military when I was older—at seven I was fixed on being a mailman—but when it was raining, or there wasn’t a pick-up ballgame in the neighborhood, I’d don my makeshift Rebel uniform, cobbled together with a gray baseball jersey, cap, a cane for a sword, and one of my toy rifles. And if a friend was willing to play a Union soldier, well, that was the best, as we’d go outside in the woods and do battle with our cap guns. I think today any Northern child acting in such a manner, if word got out, would be ostracized, suspended from school, and immediately sent to a shrink. My youthful fascination with the Civil War continued for a few years: I read big-print biographies of Lincoln and Grant, but also Robert E. Lee and Stonewall Jackson. Could be I was just rooting for the underdog 100 years after the fact, with just a scant comprehension of why the war was fought. So I’ll enter a not-guilty plea on this one, and chalk it up to premature eccentricity.

I don’t feel as sanguine about my interaction with a lovely husband and wife, the Jaegers, who lived at the edge of woods in a house that was so darkened by all the trees overhead that it seemed haunted. That was a draw. The German-born Jaegers kept mostly to themselves, and weren’t favored by my neighborhood’s mostly conformist gray flannel suit denizens. In fairness, veterans of WWII were aplenty—including the dad of the family next-door, who was at Pearl Harbor and survived the attack and had a sword hanging on his mantle, which he’d let me touch when his afternoon drinking was heavier than usual—and Germans faced a lot of prejudice. My parents weren’t quite so vindictive and my mom struck up a casual acquaintance with Mrs. Jaeger, who once a month or so invited me to their lair for hot dogs and beans. She was gruff and stern, but always kind to me, if not other kids who taunted them and purposely trampled the tomato plants growing on their patch of land. When I was 10 or so, angered that Mr. Jaeger wouldn’t return a hardball that had been swatted over the fence, I joined my friends in hurling a few mild insults at them. I saw Mrs. Jaeger that day, from a distance, and could see tears streaming down her face as she looked me in the eyes. I never ate lunch there again, and still feel a sense of shame about the end of that friendship. Definitely guilty on that one.

A year later, in November of 1966, I was involved in an unfortunate accident for which no blame could be meted out. On the other side of LaRue Dr. lived a family called The Carsons (name changed), and they had a sloping yard that was perfect for sledding. One of the kids, Joey, was my age, and as a very young child he was mauled by an electric lawnmower run amok—or so the story went—and as a result was terribly disfigured, his body and face compromised by skin grafts and he had a patch over one dead eye. You can imagine the cruelty he endured at elementary school, but I always liked Joey, and we’d trade baseball cards, play colors and up against the wall, and often toss a football around.

One seasonable day after classes let out, Joey and I, after a snack, played a game of catch. Neither of us were speed-ballers, but one of my throws caught him square in the noggin and, given his delicate condition, this was not a minor mishap. I was aghast—although Mrs. Carson assigned no blame—and couldn’t sleep that night. I was further disturbed the next day when he didn’t show up for school, taken to the hospital for a quick check-up and then home to bed for rest. Somehow, my fifth grade teacher, a bitter man who today would be diagnosed as bipolar, got wind of it—I guess Mrs. Carson called in Joey’s absence—and he announced to the class that Rusty (that was me) had further disabled the boy. On purpose. Several classmates, smelling a grand opportunity for mischief, picked up on the teacher’s pronouncement and belittled me for causing more misery for poor Joey. Never mind that these kids—rat-fuckers—never gave Joey the time of day and often made fun of him, and the scene played out for a week or so. I felt awful about it, as most would, but wasn’t guilty of any malevolence. As the next couple of years passed, Joey and I moved in different circles, but were always friendly. By seventh grade he’d grown tall, with an early mustache, and hung out with the “hoods,” a gang that was entirely different—carrying knives, wearing bikers’ leather—from the still-nascent (for kids that age) hippie crowd I gravitated toward.

I’ve no idea whatever happened to Joey Carson, and can only hope as an adult he had the means to undergo modern body reconstruction and lead a normal and productive life. He had a bad hand dealt with that damn lawnmower, and it’s my guess he never really recovered.