Clive James, a Writer to Look Up to

And a TV critic, of all things. 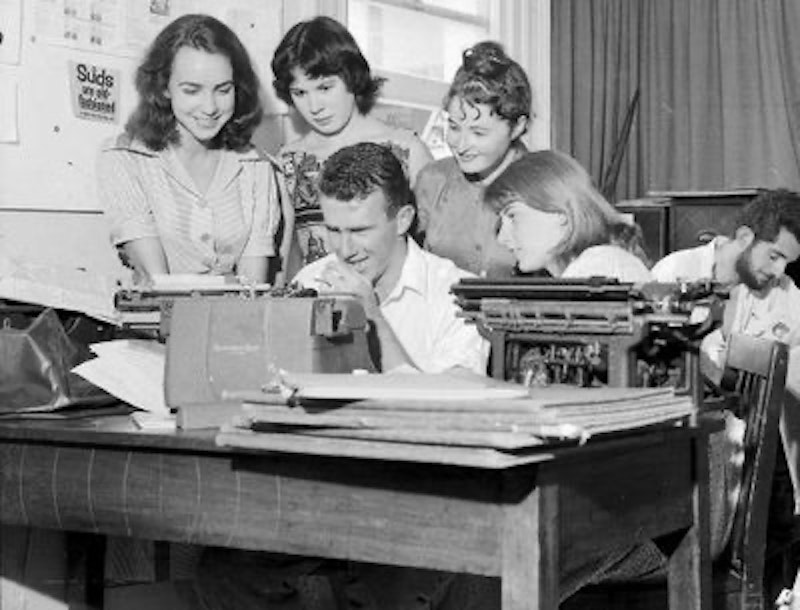 Watch Clive James do something writers dream about. The deadline’s two hours off and he sits down at his typewriter. He has a column to produce, a thousand words. From James’ memoir North Face of Soho: “Double-spaced, a thousand words filled three and a bit sheets of foolscap. I filled them as if they had offended me through their ever having been empty. For two hours my hands were a blur, reappearing in focus only when I ejected a full sheet of paper and reached for the next.” Warming to his theme, he remembers “hammering away as if being fed his whole piece by dictation through an electrode implanted in his skull.” The “his,” instead of “my,” is because James wants to give us the newsroom’s view of his activities—namely, that he presented an “infuriating spectacle.” At desks all around him, “there were a lot of full-time journalists slogging dutifully at their mandatory tasks, and for them it was no pleasure to see a part-time carpet-bagger earning the full whack in two hours,” the carpet-bagger says. Then he starts in about the dictation and the electrode.

James was writing his TV column for The Observer. He sat home all week, watching television shows, and on Friday morning he parked himself at the newsroom to turn his notes into copy. He doesn’t say so, but this is a remarkably streamlined way of producing fine prose, and his TV columns were some of the best writing ever to run in a newspaper. If TV reviews can be a phenomenon, his appear to have been a phenomenon in the Britain of 40 years ago. At least The Observer fell over itself to give him money, as James’ North Face recalls in a fond passage about his contract negotiations. Then there were the books. James’ publisher saw no point to collecting the columns, since James’ readers had already read them. But the first collection came out and “did surprisingly well” and two more followed. A decade after the 1970s ended, the collections were being collected and presented as a fat volume. Admittedly this phenomenon looks small next to Harry Potter or the Monkees, or most other phenomena, really. But we’re talking TV reviews. These reviews weren’t just read, they had fans and they still do.

I’ve been one since I read a battered copy of The Crystal Bucket on a days-long bus ride somewhere in Turkey. This was a couple of years before the new century and long after any of the broadcasts described. As an American, I’d never heard of Elkie Brooks, Katie Boyle, George Melly, David Vine, David Coleman, Dickie Davies or about two-thirds of the other people on mention. No matter, James conveyed the necessary. For example, Harry Carpenter announced sports and said the following: “This is your carpenter, Harry Commentator.” Much of TV watching involves laughing at the people on the screen. James did it for us and did it better. He had (I should say has) many sizable gifts and some wickedly effective knacks. The knack that awes me is his ability to capture speech. Observe the elegance, the minimalism, with which he gets across Henry Kissinger’s baroque accent. Kissinger (heatedly) to David Frost: “Now jusd a minude. With all due respecd, I think your whole line of quesdioning is maging a moggery of whad wend on in Indo-China.”

Of course, TV viewing often involves thought. It depends what’s on. James could cover that end of the range too. Oswald Mosley, Britain’s foremost fascist back when Mussolini bossed Italy, consented to an interview in the mid-1970s. “As always,” James wrote, “the streamlined head of Sir Oswald looked simultaneously ageless and out of date, like some Art Deco metal sculpture recently discovered in its original wrappings.” The sentence captures Mosley’s personal and historical fatuity, and does so by making us see the image James saw on his TV. Then there’s James’ handling of Albert Speer, the man who organized German resources for World War II. Historians debated whether Speer had known about the Holocaust. When Speer gave yet another TV interview proclaiming that he hadn’t, James cut to the heart of the matter: “Speer is willing to be contrite about Nazi atrocities, but only on the understanding that he knew very little about them. Undermining Speer’s position on this point is the fact that as Hitler’s armaments minister he was necessarily one of the best-informed men in Germany.”

A TV critic can be simple. A smart TV critic can use this simplicity to cover a lot of ground. A TV critic who cares to, and who has the brains, can address an ex-Nazi’s historical guilt and clear up the matter without breathing hard. James did that while racing a deadline and beating it. The man has his faults, as does his output. But he did what a writer wants to do. When you sit down and try to say something worth hearing, Clive James is a good man to keep in mind.