The Church of Pizza

These days, it's all about Pugsley’s. 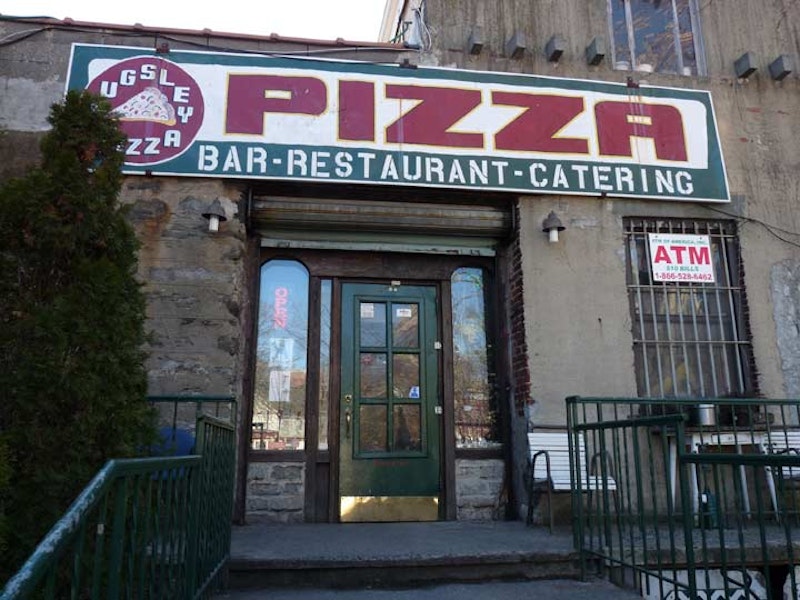 Like many New Yorkers, I enjoy a good slice or two of pizza about once a week. However, the love has not always been there; like baseball, I came to pizza relatively late. I wasn’t a baseball fan until I was eleven years old—the Mets’ Ron Swoboda visited our Scout troop in early 1969 and I got his autograph, which, sadly, I no longer have. This encounter served to spark an interest in watching baseball and I duly became a Mets fan the very same year they beat 100-1 odds and won the World Series. I thought this sort of thing would happen every season. How wrong I was!

I had stayed away from pizzeria pizza for a very long time. As a kid, I saw the old man purchase a slice from Pizza Wagon on 5th Avenue in Bay Ridge (which is still there, 40 years later) and watched him deal with the oil, which would slide down his fingers as he tucked into the slice, folded lengthwise as all New Yorkers seem to know how to do instinctively (even though the old man was from Newfoundland). As a kid, I was very attuned to appearance and texture in food. If it was messy, I didn’t want it and if it looked as if it could still be alive I didn’t eat it (which still keeps me away from a number of cuisines). To this day, I still cut all the fat off the edges of steak and pork chops, which many think is wasteful (my parents did) because I just don’t like the texture of fat or gristle in my teeth; I buy the 93% lean hamburger at the supermarket.

Thus, until I decided to make my peace with pizzeria pizza a few years later, as a kid I was an aficionado of frozen pizza, and I still buy it. In the early years my preferred brand was Roman, whose TV commercials, if I recall correctly, featured a Roman charioteer flinging pizza boxes onto suburban doorsteps. In the summer of 1975, the announcement came that Roman Pizza was going out of business. For me, really, there was only one thing to do. I collected my savings from what I had in my chest of drawers and my meager bank account, grabbed a shopping cart, and proceeded to buy the entire stock of Roman Pizza from the 86th Street Key Food. It took about seven separate visits (then as now, I didn’t drive) but, by God, I had the entire remaining stock of Roman Pizza that lasted me clean through January (and it was all mine, because the old man didn’t much care for frozen pizza).

By then I was grabbing slices from pizzerias, but I also settled on a brand of frozen pizza that would last me for the next few decades, a brand called Ellio’s. The brand was founded by the Betzios family and believe me when I tell you that in its original formula it was absolutely delicious. It was different from classic pizza, but had a personality all its own; I loved how the edges would crisp without actually burning after 15 minutes in the toaster oven.

After a couple of decades the Betzios sold the Ellio’s brand to a conglomerate, and they changed the recipe to a very bland formula quite similar to generic brand supermarket frozen pizza (i.e., cardboard). It does the job in a pinch to allay stomach grumblings at day’s end when there is nothing else in the fridge, but I avoid the brand if I can.

However, for fans of the old Ellio’s recipe, there was some consolation, as Betzios sold it under their own name in red, white, and blue boxes for a few years. Unfortunately, Betzios has not been seen in supermarkets at least locally for about a decade, and I read on various internet food boards that the brand is kaput.

Pizzeria pizza had come to the fore in my sensibilities. You cannot get a truly awful slice in NYC, in my experience. You can get a slice that is less than optimal if it has been sitting on the counter for awhile. Supermarket frozen pizza is almost invariably the “pan” or “grandma” variety, which is thick crusted, but in actual pizzerias, I’ve always ordered the thin-crust variety for lunch, it’s satisfying but doesn’t leave a weight in the belly for an hour afterward.

Since I’m an infrastructure guy, I pay attention to what pizzerias look like. They are usually white with red trim and have photos of “the old country” on the walls, depending on what country the owner hails from. By and large, the neighborhood pizzeria experience is bland, architecturally—better when there is a sitdown restaurant attached, but still rather generic. 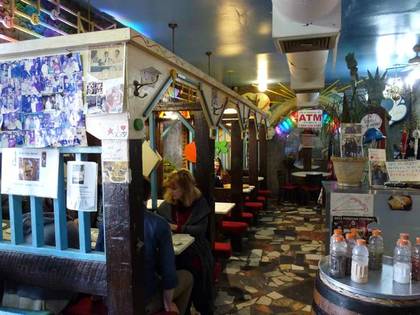 This leads me to Pugsley’s Pizza in Fordham. I was tipped off about it by a Facebook post from ESPN’s Paul Lukas, whose "Inconspicuous Consumption" column I had followed avidly in the old New York Press twenty years ago. Located on East 191st between Hoffman Street and Hughes Avenue, tucked off the south side of the street with a large front yard/driveway, and facing the Fordham campus, it’s easy to miss if you don’t go to Fordham because it’s off the main drag, Fordham Road.

You walk inside and it’s a pizzeria like no other, at least as far as décor is concerned. It appears to be a Fordham dorm room with kitchen tables, some soft chairs, and somewhat secluded booths with more traditional wood seats and Formica tables. There are hundreds, perhaps over a thousand, photos of Pugsley’s staff and patrons, along with other detritus and memorabilia; this seems to be the pizzeria version of the old Waterfront Crabhouse in Queens, which had been owned by a boxing promoter and had thousands of boxing memorabilia and NYC artifacts arranged in the space. 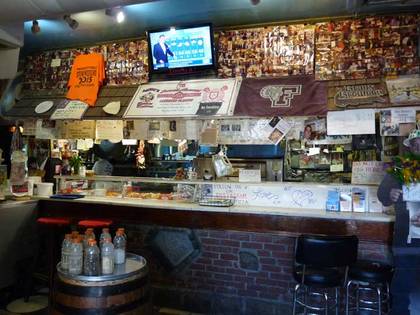 Hand written signs promote the power of smiling. True to the signs, I was greeted with warm smiles by both people I dealt with, despite the fact that I was a newbie and the place must get a lot of business from regular customers.

According to bronxnarratives.com, Pugsley’s was founded by Sicilian immigrant Salvatore Natale in the early 1980s, a former jazz saxophone who had arrived in the States in 1967. It was originally located on Pugsley Avenue in Castle Hill (and thus has nothing to do with the striped-shirted Addams Family kid played by the late Ken Weatherwax on the TV show). In 1985, Natale purchased what had been a junkyard on East 191st and opened the current shop there; it was likely his son Pete and daughter-in-law Laura with whom I dealt. It was an almost immediate hit with Fordham students and locals; we’re just off the Arthur Avenue Italian cuisine district, but its somewhat disguised location means it’ll always be for those “in the know.” 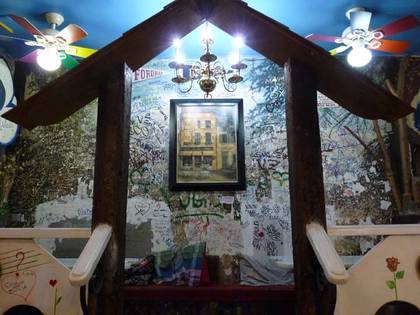 It’s rare that I frame a shot just right, but I can use both this angle as well as the Jesuit presence of nearby Fordham to proclaim Pugsley’s as “the church of pizza.”

As for the Pugsley’s pizza itself, it’s top drawer. I had two pepperoni slices (my style of choice) and it’s done a bit differently because the pepperoni is placed on top of the cheese but then a thin layer of cheese is also baked on top, making it a sort of baked cheese-and-pepperoni sandwich. It’s immensely satisfying; Pugsley’s pies seem a bit larger than other pizzeria pies, so two slices will leave you fealing a little fuller than you would be otherwise. I had a lot of subsequent walking to do back to where I was getting the train, so it was worked off pretty adequately.

Sal himself shows up now and then for a sax solo.