I Can’t Help Myself (that’s Sugar Pie Honey Bunch to you). 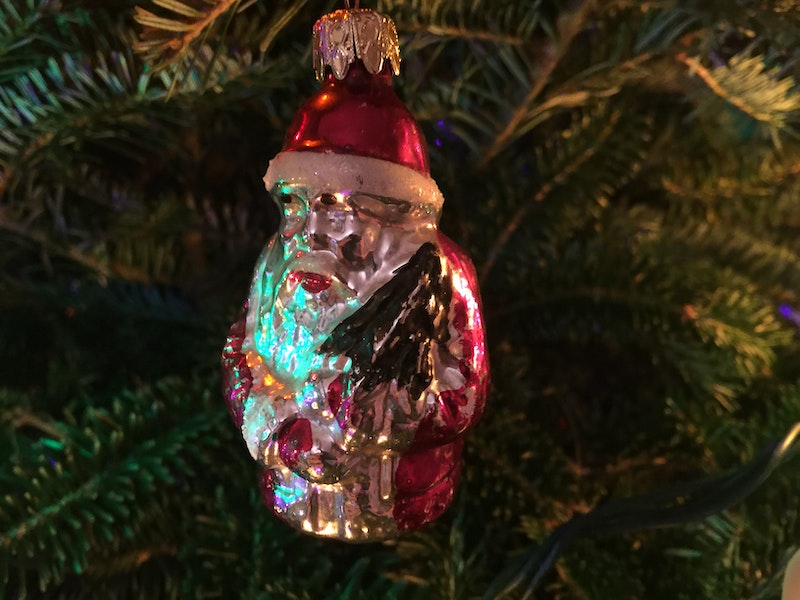 It’s impolite to boast, especially at this time of year, but my family really is tops in the Christmas tree department. I thought about this, mind wandering, the day before Thanksgiving while getting my ear chewed off by an amiable nurse who was drawing blood from my right arm. I asked about her clan’s plans for the holidays, and after a lengthy—and a smidgen bitter—recitation of her Thanksgiving menu and four a.m. Black Friday date at Target the following day, she got around to Christmas. Turns out her kids had already put up the tree—Nov. 23!—and while it wasn’t surprising to learn it was a fake number (gauche in my Puritan view, but times change) the kicker was the color: black. I’d held my tongue up to that point, but this was too rich to pass up, and I queried about how terrifically strange that was, and would certainly turn Blitzen’s antlers to dust, yet she replied that it was her latter-day goth kids’ idea, so I let it drop.

My own family, both extended and nuclear, doesn’t cleave to all holiday traditions—Easter’s an afterthought, for example, chocolate bunnies when the kids are little, but no church—but Christmas is a whole-hog affair. It’s been that way since I was a tot: maybe 10 days before the 25th, my dad would take whatever boys were around the house and go buy a tree on Woodbury Ave. (not far from where our Boy Scout meetings were held), which was a lot of fun, especially seeing him haggle over the price. “That’ll be $8, Mr. Smith,” and my father would offer four. They’d settle in the middle and everyone was happy. Those trees were more modest than the ones my own family has today, but always splendid: lots of ornaments, garlands around the branches, and tinsel chucked just everywhere. (That the tinsel clogged the vacuum cleaner for two months afterward didn’t please my mom, whose holiday cheer, like everyone else shoveling snow, was long exhausted.)

Here in Baltimore, we always buy our tree at Green Fields Nursery on Falls Rd.—as I’ve mentioned before, one of the most efficient small businesses in all of the city, a demonstration that attentive, friendly, and quick service keeps the customer satisfied—and 10 days ago my son Booker and I picked out a dandy of a blue fir, a 12-footer that just barely scrapes the ceiling of our sun room. A day to breathe and then the multi-colored lights are strung up—I’ve no patience for this step, since it requires concentration, and reasonably decent eyesight, so that was at first palmed off to my wife Melissa, and now Booker has selflessly volunteered for the chore.

But trimming the tree is always—always—a delight, as we dig into the two plastic tubs of ornaments that span more than a lifetime: one or two remain from my mom’s childhood in the Bronx; several are World War II plastic stars and Santas (no glass available then); more are gaudy, droopy balls from the 1950s and '60s, most of which my mom would buy the day after Christmas for 50 percent off; and then a slew of ornaments purchased at various points of travel around the world, not to mention the really fancy ones Melissa and I bought one December in the '90s at Bergdorf Goodman. It nettles my wife and son, but I always insist on listening to either Blonde on Blonde or Highway 61 during the hour-long trim—they’d prefer something more contemporary—and this year, my head did a tilt-a-whirl listening to “Absolutely Sweet Marie,” a song that still blows my mind.

There’s particular reverence given to a glass Santa that was dubbed “the Rusty ball” (pictured above) from as long back as I can remember. Growing up, our boys were extremely careful with this fragile ornament, as if it fell on the floor and busted, Christmas might be ruined. Taking to the confessional booth, I must point out that the “Rusty ball” is just a touch fraudulent, if only compared to the most revered ornament in the Smith family. That would be my fourth-oldest brother’s “Gary ball,” which he decorated himself as a four-year-old in nursery school, the bright green not so bright anymore, and maybe a few sparkles lost to the years, but remarkable nonetheless for its survival. Gary’s now traveling on Route 66 in the rings-around-the-trunk departments, yet this prized possession has survived not only growing up in Huntington, but moves to San Francisco, Santa Fe, Rochester, Manhattan, London, and now Bermuda. I’m certain his own sons Quinn and Rhys, growing up, walked on bluebird eggshells when even looking at the antique, and when I spoke to Gary a week or so ago, he said he and my lovely sister-in-law Teresa had just finished fixing up their bounteous tree, and yes, the “Gary ball” was in its usual prime position. Frankly, Keith Richards has nothing on the “Gary ball” when jabbering about longevity, as I’m sure that small glass curio has lived as rough as Keith.

As it happens, both Nicky and Booker have their own special ornaments as well, fashioned at the Browning School on the Upper East Side in 1998, and they hang, every year, side by side on the tree. It’s my hope that 40 years from now these historical artifacts will still be dangling on their own trees. 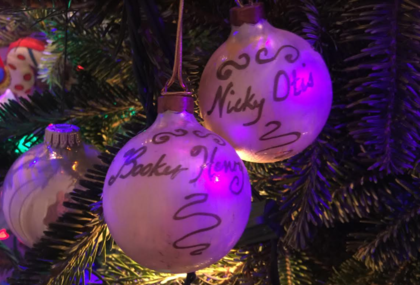