The Emergence of Krampus 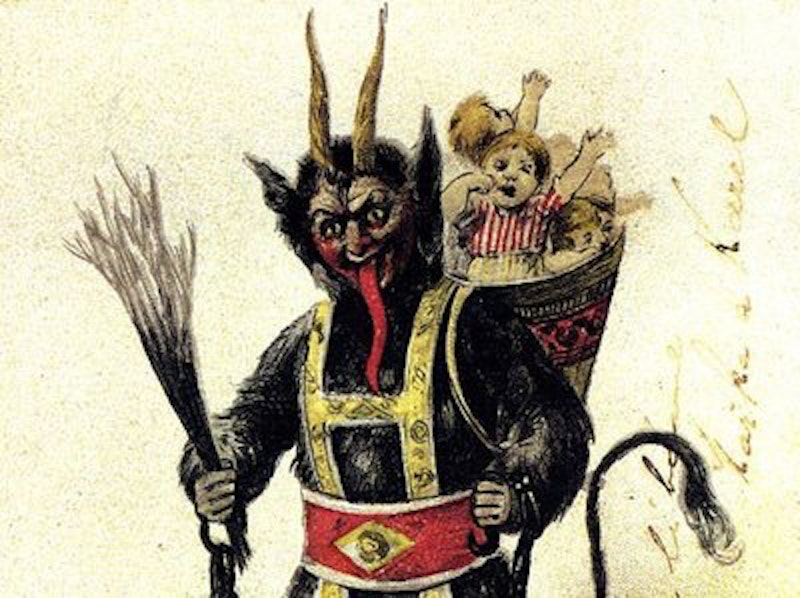 I’m fascinated by the rise of Krampus in our popular culture. Christmas is a unique and plastic holiday, forever shifting its shape and purpose. It’s marvelous to behold: adherents of a fanatical genocidal Middle Eastern death cult tossing aside their dogma and differences to join in celebrating an ancient and distinctly pagan European festival centered upon generosity. Until very recently, I harbored a deep cynicism about the holiday: the in-your-face crass commercialism, the once-a-year public displays of concern for the poor and the homeless, the hypocritical virtue signaling. Now I kick back and enjoy it. Aside from being essentially invisible to the cops, there aren’t a whole lot of advantages to being old in this country. As David Gilmour sings, I need no blessings, but I’m counting mine. I doubt I’ll ever be what people call “mellow,” but I’ve mellowed since I hit the high side of 60. My new-found comfort with this season is a welcome side effect of growing old.

Back in the somewhat less hectic 20th century, Krampus was an obscurity to most Americans. Santa Claus, as we understand him, is largely a creation of the Coca-Cola Company. I’ve always felt that there was some weird connection between the hijacking and transformation of Santa Claus for commercial purposes and the rise of anti-Semitism in Europe. Up until Coca-Cola took hold of him, Santa Claus was depicted in green robes. Comes the turn of the 19th century to the 20th, suddenly he appears in red, white, and black, the Nazi colors. He doesn’t give much to people of color and absolutely nothing for the Jews. It’s fairly easy to imagine those reindeer as wolves, and those elves as pimply-faced Nazi skinheads from Staten Island or Kentucky, riding on the running boards of his sleigh, hopping off once in awhile to smash the windows of Jewish-owned businesses. Once this idea got into my head, it was hard to shake the image of Hermann Goering in a Santa Claus suit, laughing his way across the sky just as he laughed through the Nuremberg trials. “Ho ho ho,” indeed. He cheated the hangman; good for him.

Those of us in the pagan community, being more in tune with European tradition, have always been aware of Santa’s nasty sidekick. The gradual emergence of Krampus in American pop culture is part of an intriguing transformation going on here as European-descended people here shake off the shackles of historical guilt and reassert the value of our European heritage. Being tolerant of other cultures does not necessitate the rejection of one’s own. White guilt is ridiculous. We’ve saved more lives with our plumbing and hygiene than we ever took in our colonial enterprises and wars.

Obviously Santa Claus is not a Nazi, despite the best efforts of the mega-rich multi-national peddlers of poisoned sugar water to depict him as one. He simply hot prowls your home while you sleep like the Night Stalker, devouring the cookies and whatever other treats you may have left for him, deposits the presents under the tree, and splits. He’s not violent or in any way vindictive.

It’s very easy to imagine Krampus stomping a Paki or a Somalian in a back alley in London, Hamburg or Nice. Krampus unleashing brutality on this invading horde of hateful rapey superstitious savages is so obvious as to be fully expected. The USA has always fundamentally been a European dream. Europe is nominally Christian, but the pagan roots run deep. We Americans are the living embodiment of their hopes and aspirations, or at least we were. For the past 70 years, white Europeans have been the most racially altruistic people on this planet. The result of that has been the utter destruction of their magnificent social welfare systems and the near destruction of European culture. It’s a form of genocide. Sooner or later, Europe is going to put on the boots again and clean house.

It stands to reason that America, functioning as Europe’s subconscious Freudian Id, would embrace Krampus as a useful addition to our cultural landscape. In many ways, the rise to prominence of Krampus here parallels the rise of Donald Trump. He is very much a Krampus figure, whacking us on the butt with the stick of blunt truths considered unspeakable by career politicians. I suspect that the ascent of Trump is only the beginning of the resurrection of European pride and heritage. Somewhere in the White House, the ghosts of Andrew Jackson and Theodore Roosevelt are chuckling at the prospect of President Krampus.