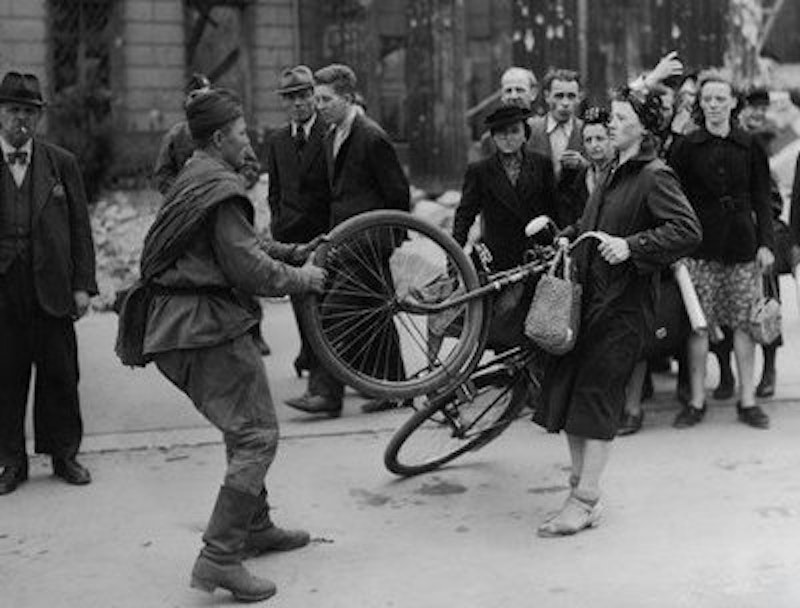 I’ve been reading more about the mass rape that the conquering Red Army inflicted on German women as it pushed towards, and finally conquered, Berlin in 1945. Even given the wartime context, this violation of Aryan womanhood (what the Russian Jew writer Ilya Ehrenburg collectively characterized, with the racism characteristic of his type, the “Blonde Witch”) was a terrible crime.

But I’ve been wondering whether a similar campaign of systematic rape by a contemporary invading Russian army in another country besides Germany would also be a crime. This question has furnished Father Nicodemus, Brother Aiden, and me with conversational fodder to fill many hours at my fireside on these winter evenings while Mother and Sister Marie change the wadding in the pigsties. (And while Daughter, that slut, surrenders herself to self-pleasure in her loathsome bedroom—but that remains a matter for another time.)

This question has real relevance given the current geopolitical situation in Eurasia. It seems more and more likely that, within the next 10 years, a resurgent Russia will reassert military dominion over those regions stolen from it since 1992 by the Wall Street/Tel Aviv/Davos cabal. After a splendid campaign of punitive bombing, the Russian army—stalwart, striding Orthodox Christian men—will march into such fascist sewers as Georgia, Latvia, Lithuania, Estonia, and Ukraine.

Given the Russian military’s traditions, mass rape could, I admit, indeed occur in each of the liberated countries. But would such rape be sinful?

The consensus among my admittedly small sample of paleoconservatives/Russian Orthodox here in Indiana is that it wouldn’t be. There’s a higher moral principle at work here: the principle that dictates that the Holy Great Russian people have the right (bestowed upon them by the God the Father, the Logos) to reclaim their domination of the inferior nations that, since 1992, have aspired to an independence they don’t deserve. Even tens of thousands of rapes are, morally speaking, immaterial in the face of the imperial Russian imperative, mandated by the Logos and at least tacitly endorsed by Patriarch Kirill and the Church hierarchy.

Then too, there’s the question of who is getting raped. Father Nicodemus argues convincingly that there’s a difference between the rape of a German woman, heiress as she is to one of the three great Occidental cultures (along with the Great Russian and the Anglo-Saxon), and the rape of a Lett, Little Russian, bohunk, or similar sort of woman/whore, heiress to bestial illiteracy, cultural nullitude, Ricketts, fascism, lesbianism, and scrofula. I’m not completely “on board” with Father Nicodemus’ rather austere opinion here, but I will allow that he expresses it in a convincing manner, citing in its defense many of the great theologians of the Russian Orthodox tradition.

Incidentally, Father Nicodemus has an interesting plan for the thousands of bastards that will result from the Russian army’s reassertion of its divine right to its former colonies. He proposes giving them, as their Christian names, monikers derived from the surnames of some of the great alt-right propagandists of the American media—formidable horse-faced Anglo-Saxon/Russian Orthodox snufflers, wonderfully consumed by anger at the presumption of the world’s “small nations,” like Daniel Larison, Scott McConnell, and new American Conservative editor Robert Merry.

Such first names would ennoble the lives of this child trash. Mandating these names’ application in the new Russian Empire will be crucial as soon as the seizure of power is effected and the Zio-nationalist bourgeois/secular enemy is liquidated.