Has to be a tough year for itinerant Santa Clauses. 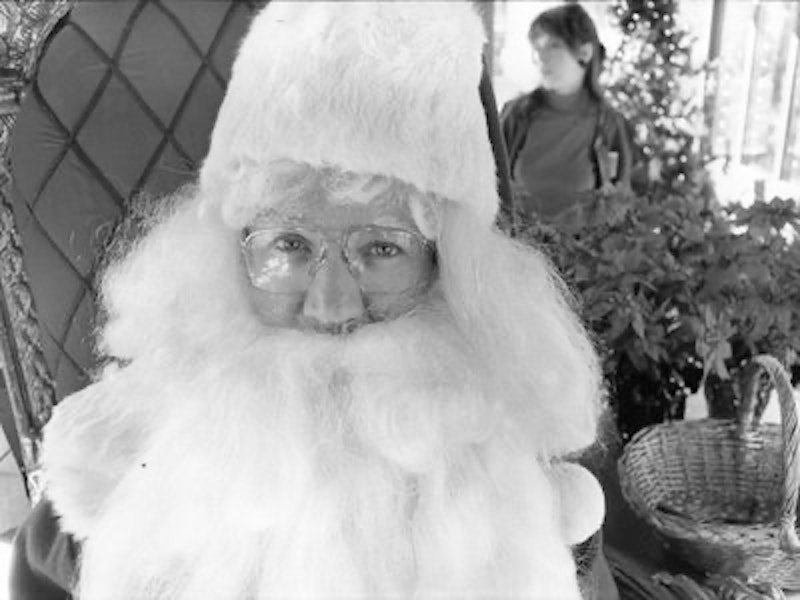 You have to wonder whether the thousands upon thousands of for-hire Santa Clauses around the country will be receiving some pretty kooky requests from the kiddies this year. Naturally, I’m thinking specifically about the East Coast—are there even Santa Claus hobos plying their minimum-wage trade in California, land of the fake Christmas trees?—where hysterical parents might coach Tyler or Bethany to grill the poor guys about Donald Trump and ask if he can make the President-elect disappear, or worse. It’s all for the children, and it takes a village, to paraphrase a onetime presidential candidate who’s nursing her wounds in some palatial bunker. “Santa, can you make sure that Rick Perry, that Texan ignoramus, isn’t confirmed by the Senate for Energy Secretary?” “Santa, have you signed the petition to pressure potentially ‘faithless electors’ to vote for some other person than Trump next Monday”? “Santa, is Kanye West an asshole for going to Trump Tower?” “Santa, are you getting an earful, and maybe the rolling pin from Mrs. Claus for allowing a racist, misogynistic racist to set foot in the White House”?

It’d be hard to blame these guys for taking an extra slug from their pint bottles of Smirnoff’s while hitting the john to muster the courage to face another 50 young, force-fed historians.

I’m not entirely teasing about this: the anti-Trump brigades are so out of their minds right now, so filled with non-seasonal outrage and sanctimony that the weirdness is bound to occur. Picture this: some fat guy at The Washington Post—eye of the Trump hurricane—draws the short straw and has to listen to the children of fellow employees. It would make for a nifty Saturday Night Live skit, right?

As a youngster myself, I think I sat on Santa’s lap once or twice—that I can remember, anyway—at the Woolworth’s in Huntington, New York, and have to say they were cut-and-dried affairs. You got three or four minutes with a red-faced guy, asked for a baseball bat or Chinese checkers, and he’d say, “We’ll see what we can do!” and then got some cheesy souvenir or picture with St. Nick. My own boys did the Santa routine once or twice, as well—a dereliction of duty on the part of Christian parents if they passed, although by the 1990s it was kind of a scuzzy bit of Americana that was so not Norman Rockwell that it nearly made you shed a tear for some of the old Christmas traditions. Mind you, I’m not pulling a Pat Buchanan here and pining for a return to the 1950s where not one kid in America asked Santa for a copy of Allen Ginsberg’s “Howl” or the latest Little Richard LP. Have to admit I liked, as did my son Nicky, the first Bad Santa movie—the sequel’s a dud—but it was no It’s a Wonderful Life, just to throw some cornpone your way.

I can sympathize, at least moderately, with these gents, for once, and once only, I played Santa Claus in downtown Baltimore at an outside hut located in the once-thriving Harborplace (this was before the two pavilions, plus the Gallery mall across the street, became giant dollar stores, as the city’s grifter politicians moved on, showering tax breaks on tenants for the spiffier Harbor East) in 1986. As a co-proprietor of the weekly City Paper, then rather successful, I was on a “celebrity” list—and you wonder why Baltimore’s called “Tinytown”?—and gladly accepted the assignment. As the picture above (shot by my friend John Ellsberry) shows, my then-135 lb. frame was stuffed and stuffed and a bit of makeup applied to make me look like the real dude. I balked at removing my eyeglasses, which was frowned upon, but that was hard cheese for the boss lady who was running the event.

It lasted about 45 minutes, and truth be told, I had a lot of fun, although the parents weren’t too pleased with my patter. When a child would beg for the “hot” toy at the time—a Cabbage Patch Doll, perhaps—I’d go into an ad-libbed rap about the value of reading, and say, Patty and Johnny, don’t you think a copy of Huckleberry Finn or A Child’s Christmas in Wales would be a lot more fun and wouldn’t bust into a hundred pieces on Boxing Day? (That’s pretentious, I know, invoking a British holiday, but I just finished watching the superb The Night Manager, starring Hugh Laurie, Tom Hollander and Tom Hiddleston, so tough luck.) Anyways, the poisonous stink-eyes from the parents hovering next to me were vicious, even hateful, and I didn’t get why. I think one of Baltimore’s many slogans at the time—or perhaps it was a few years later, but certainly in gestation—was “The City That Reads” and I did believe my spiel, while not exactly in the spirit of rank commercialism, made a lot of sense. Could’ve been the organizer wanted me to act like a Mideastern souk, and drive the parents to one of Harborplace’s retail shops, but in any case, I wasn’t asked for an encore the following year. (In fact, I was in Berlin at the time, but upon my return the telephone messages on my answering machine and pile of mail contained no invitation.)

So may the Lord bless every fake Santa Claus this December, drunk or sober, and don’t let The Resistance wear you down.