One tree ornament per year per kid. 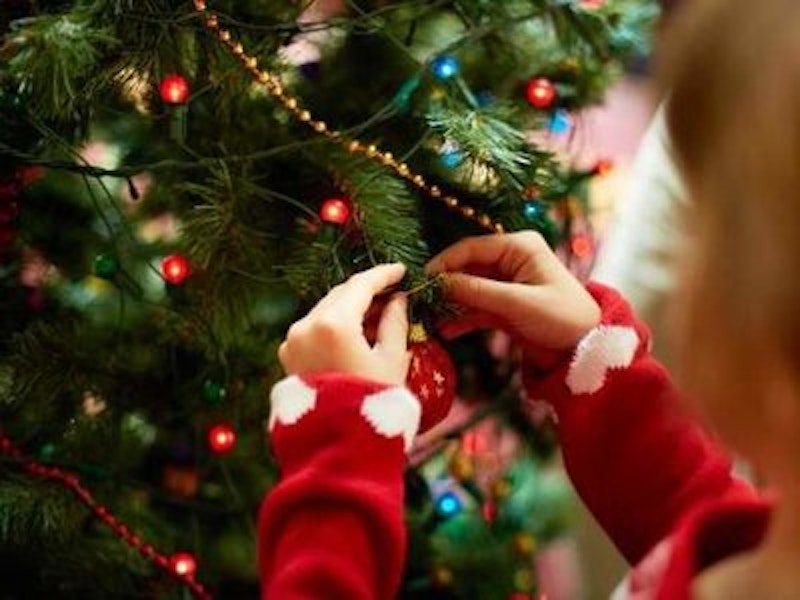 I’m not sure where I got the idea. I don’t remember reading it in a magazine, though it seems like the kind of thing I would’ve done back in the mid-1990s when I’d read magazines to get parenting advice as a first-time mom.

In 1994 when it was my first daughter’s first Christmas, naturally we bought the Hallmark’s “Baby’s First Christmas ornament,” the one where you have to somehow find a proportionately-sized photo of the kid’s face to crop into an impossibly-sized opening. The small tree in our cute apartment proudly displayed the new ornament reading “Our First Christmas” and the “Baby to Be 1993” rattle I’d found at a clearance sale the previous January. I guess when you first get married, your tree has a bunch of generic ornaments on it. The only two I had leftover from childhood were a 1977 engraved brass angel with my name and a bell on it—I remember the King of Prussia Mall kiosks where they’d engrave those ornaments—and a ceramic Charlie Brown and Snoopy bell that Sister Nancy gave me back in 1983.

So perhaps I thought to myself that every year I should get this new baby a Christmas ornament, so that someday, when she was older, she’d have her own box of ornaments for her own grown-up tree and it wouldn’t have to be covered in generic ornaments. Year Two was easy: Baby’s Second Christmas compliments of Hallmark, again. But for the years thereafter, I decided the ornaments should reflect what she asked Santa for, or some activity she was involved in. Her third Christmas had to be a holiday Barbie. That big blonde hair and matching big dress that she couldn’t wait to open from Santa under the tree was also represented in miniature as an ornament under the tree. Later came Pikachu, ballet, bowling league, field hockey, marching band, theater, and other themed ornaments that represented her highlighted moments of each year.

As the years went on, she was joined by two more sisters and a brother and their subsequent annual ornaments: soccer, Tim Burton’s Corpse Bride, Blue’s Clues, Tow Mater from Cars, 101 Dalmatians, more marching band, baseball, basketball, Sleeping Beauty and a few other Disney Princesses, Buzz Lightyear, more ballet, SpongeBob, and many more. With kids ranging from 11 to 22 this year, the math turns out to be 64 total ornaments bought, not including the four they haven’t received yet this year. The kids open them on Christmas Eve, after Mass, and then they exchange their gifts to one another. So that’s our family tradition.

There’s a catch. My oldest daughter doesn’t live at home anymore. She’ll be 23 in April, so the time came, two Christmases ago, when she moved to her apartment in Baltimore’s Mount Vernon neighborhood, where I had to actually hand her the box of ornaments. This was the whole idea, right? It was why I’d done it. And I knew she’d be so proud of having her own Christmas tree—in fact on Facebook this year, she posted a photo of “the evolution” of her three Christmas trees over the years since she’s been living there: first, a tiny potted tree, then, a tabletop tree and now, her first full-sized tree.

But as a mom, turning over that first box of ornaments made me realize that at one point I’ll be turning over that last box of Christmas ornaments, to my youngest, my son. For the moment, there’s a box under the tree of my college freshman’s ornaments. She got home late last night from her first semester at Virginia Tech, and I know she’ll enjoy putting her 18 ornaments on the tree today. For now, they still go on the family tree.