Oh, c’mon, the babies are all right. 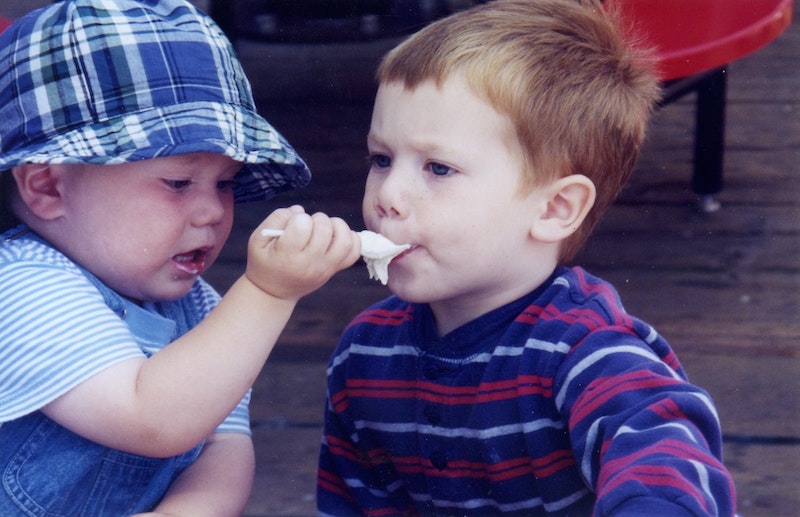 I haven’t the statistics on common complaints of Americans, but it’s almost certain that crying babies or toddlers on airplanes ranks high on the list. I never quite understood this, since flying (or taking a train) presents so many more grating annoyances—especially in the 21st century, like delayed departures, missed connections, extra charges tacked on out of nowhere, and rude airline personnel—that a screaming tot falls in the middle of an in-for-a-dime-in-for-a-dollar mix. Granted, as a younger man, I wasn’t crazy about the noise, especially if the frantic, sometimes apologetic parents and kid were close by, but I tuned it out. And, of course, once you have children yourselves, the entire equation is flipped upside down. Years ago, while traveling to Rome, our one-year-old son Nicky kicked up a real rumpus as the plane was descending, but if other passengers rolled their eyes my wife and I missed it: we were too busy trying to calm him down, and when he peed on my suit, well, that was par for the course. As it was later during that trip when, upon reaching the Hyde Park Hotel in London, he barfed all over the Mercedes that had picked us up at Heathrow. I gave the driver a fat tip, and he said he’d seen far worse in the car, the details of which I didn’t want to hear.

Anyways, I was reminded of all this last week when someone posted a question on either Facebook or Twitter (hate to jump on the bandwagon, but she was from Brooklyn), asking other parents when was the appropriate age to take their young progeny, in strollers, out on shopping trips. I did get a chuckle out of this, since it was so ridiculous—although earnest responses filled her thread—that, in a fouler mood, my head might’ve exploded. I don’t think the question was posed strictly on a manners/etiquette basis, but rather as a way for the woman to seek approbation from her peers. What a weird world. 10, 20, or 30 years ago—let alone earlier in the last century—it’d be a rare crow who’d worry about such matters. After all, people have kids, some of whom are well-behaved in public, some not, and it’s just a part of the daily routine.

In the photo above, taken at the Santa Monica Pier in Los Angeles in 1995, my two sons look peaceful, and, well, cute, as Booker gives his older brother a spoonful of ice cream. Thirty seconds after the picture was snapped, Nicky had what today is called a “meltdown” about the flavor of the ice cream, and no one batted an eye; in fact, a couple of people gave us sympathetic looks, as if to say, good luck! As it happened, he calmed down shortly after, perhaps bribed by a corn dog or ride on the carousel and the fifth trifling crisis of the day was over.

And truthfully, people in general are very understanding of the difficulties parents face, whether it’s hauling a stroller up steep steps or a toddler running around a supermarket like a puppy whose dish of food was laced with amphetamines. One December day in Manhattan, again the mid-90s, my wife and I were in Soho attempting to buy some Christmas presents, when Nicky, in his pushcart vehicle, out of nowhere barfed all over the street. Not much we could do about the mess on the sidewalk, and as we cleaned him up, pedestrians passed by with nary a snide look. After all, a kid puking is a less disturbing sight than a disheveled man jerking off in the bushes or a flock of college kids panhandling for spare change.

Minutes after the sidewalk spew, we crammed into a toy store called Penny Whistle, hoping our son’s indigestion had abated, for we had a raft of items to purchase. It just wasn’t a good fur day, since he once again let loose all over the floor of a narrow aisle. This, as opposed to outside, was mortifying, and as I went to a manager to ask for paper towels to clean it up, he kindly said, “Let me do it, it’s really not a problem, I just hope your son feels better.” Now, that was the Christmas spirit!

Not everyone is as accepting of raucous babies or kids as those I described above. More than once I remember taking the kids for an innocent walk in midtown and some smart mouths (never alone, since that would take real balls) would derisively sneer, “Breeders!” at us, as if that insult would even register. One time I thought about engaging a group of smug twentysomethings, but knew it would just lead to a condemnation of the selfishness of reproduction in the face of global catastrophe—recalling similar arguments in the 1970s about overpopulation—and that’s the kind of debate that’s better suited to a dorm room after Mr. Bong has been passed around a dozen times.