Escape from The New Yorker. 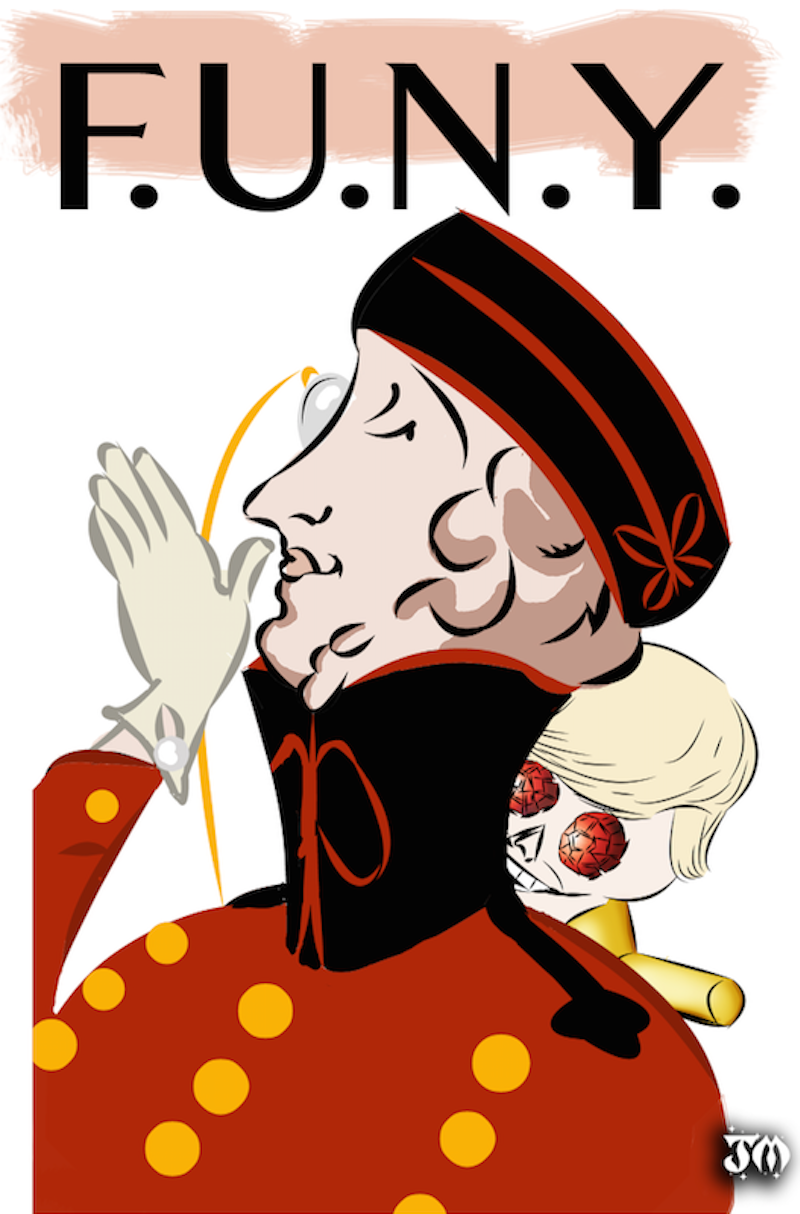 Despite having no feet, the Ruby-Eyed Skull Cufflink President Elect big as your head really stepped in it this time. Not satisfied with a world turned upside down by his controversial cabinet picks, Swanky compounded the facture by hiring New Yorker magazine mascot Eustace Tilley as the next White House Greeter and Special Bell Hop to the POTUS.

Everyone in the world has condemned the appointment as a sellout. Everyone that is, but Eustace.

Swanky partisans say the geriatric boulevardier represents the apotheosis of Ipecac half of America rejected, sneered at, short-sheeted and otherwise shunned at the polls. If they didn’t have jobs and families and machine guns to clean, they’d surely march on Manhattan, throw Tilley’s topper in the Hudson, wring his high-collared pencil neck, and smash his monocle with a ball peen hammer. And maybe make him eat the broken glass. Well, not really like swallow it or anything, but you know, chew enough to cut his lip and make him cry.

Just as vehemently, Swanky opposition leaders compared Eustace Tilley’s appointment to the craven act of a bed-wetting subway-spitter who pulls wings off poets and binge watches the Knife Channel. However, harshest criticism was reserved for Tilley himself.

“Frankly, I felt bad for the guy,” admitted Swanky. “New Yorker checks don’t stretch like they used to. I mean, there he sat, gone to seed, living with 23 cats and conversing with stacks of old magazines in a dreary efficiency above some dopey Duane Reade’s. Pathetic, really. Still practically a freakin’ intern since Al Hamilton used to get pie-eyed with Ross and Perelman and stumble down Wall Street to throw up and gawk at the gallows.”

Pausing to wipe a salty tear from his ruby eye, the Skull Cufflink big as your head continued in his first post-election interview with this reporter, making the case for Eustace Tilley going to Washington.

“No matter what the say, Tilley’s got that old New York class, big class, my friend. Did you ever hear him talk? Just like George Plimpton! Cracks me up. Whenever I ran into George I’d ask that old Papa-oo-Mau-Mau to say, “Bird is a word.” Plimpton would go “Bihhhd is a Wihhhhd.” What a pisser! Oh geez. It’s not well known in Greater America, but Tilley can be just as funny. It’s not so much what he says or how he says it.  Beats me. Maybe his B.O. is funny. Whatever, he’s just the biggest sleeper in the history of stitches. And America loves funny, right? A big smile and a first-class joke. I can’t think of a better greeting at 1600, can you? We got him a little silver tray and everything. Reminds me of a Munchkin in a Marx Brothers movie. Swear to god I bust up every time I think about Tilley. You should hear his stories about that Tina Brown woman. Pure milk through the nose. Milk through the old schnozzola Mrs. Calabash, I’m telling you!”

“But listen,” continued the commander-in-chief elect, “Between you and me and Mister Blackwell’s ghost, we had to stage a little style intervention before we could seriously think about shoving Tilley’s big funny class out front of my new house.”

On cue, Swanky’s transition team smacked down a fat stack of glossy freeze-frames, the product of an ultra secret publicity photo shoot. This reporter’s first thought was “Call for Phillip Mo-RISS,” but the last person to make that reference was Joe Franklin in the late 1980s on a New York City UHF channel, so we’ll refer you back to the above eyes-only still and spare you the thousand words.

As the Swanky Nullification Movement gathers steam, resistance leaders are calling for a nationwide boycott of the Russian Tea Room, New York’s notorious den of spies, hackers and Fake News mongers. Virtue-signaling fashion prices continue to spiral on hot barricade wear like pre-battered berets and jaunty keffiehs, while Garment District weapons- grade accessory dealers struggle to keep up with demand. In other parts of the nation, dried Y2K food bargains can still be found, such as especially exciting deals on dried lentils with five semi-good years of remaining shelf-life, great snacking in front of hungry, unarmed, weepy and not so aggressive Waldorf School graduates.

So much can hit the fan before our president-elect ruby-eyed skull cufflink big as your head can move in and sack out for certain in the Lincoln Executive Dresser Caddy.

If you don’t weaken it’s gonna be a hell of a crapshoot. So best stay tuned. We have reason to believe that our unprecedented access to the new Oval Office might very well lead to Tilley becoming our exclusive fly on the wall in a monkey suit. And we gotta tell you dear readers; the name of that silly symphony will most certainly be Yuge.