My 115th daydream of Manhattan before it turned (nearly) generic. 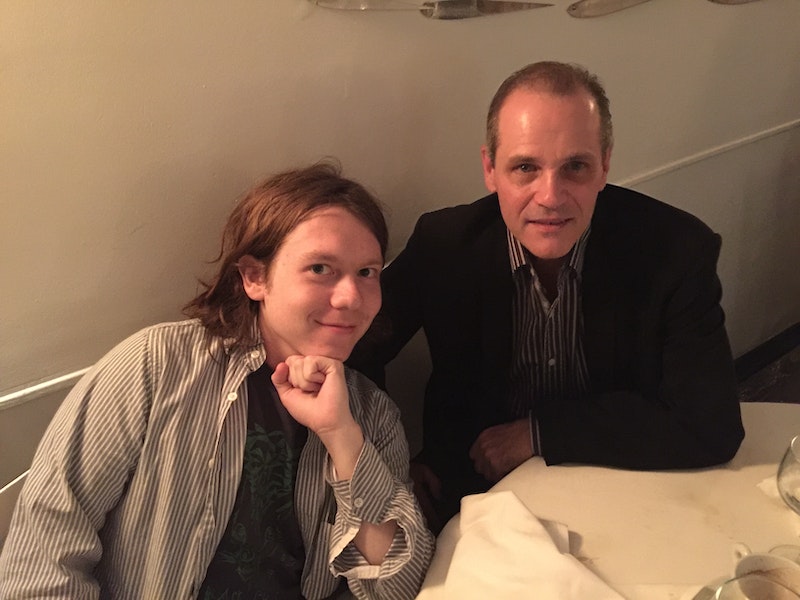 I’ve had dinner at Manhattan’s Periyali around 25 times since the W. 20th St. upscale Greek restaurant opened in 1987, and, as you might suspect, it’s one of my favorites. Last Sunday, on a quick jump to the city for a few days, my sons Nicky and Booker and I met up with Michael Gentile—a fellow I’ve known for 35 years, who was an art director at Baltimore’s City Paper and then New York Press, as well as an extraordinarily talented painter, and probably the funniest, and ribald, person I’ve ever met—and, as befits our dotage, it was an abstemious but still rollicking couple of hours. Not always the case!

In 1992, on the night before Melissa and I got married, our rehearsal dinner, courtesy of my oldest brother—there was no “rehearsal,” since the ceremony the next day took all of five minutes—was held at Periyali, in a private room that held our 40 or so boisterous guests, including loads of family members from both sides and a bunch of out-of-town guests who flew in for the weekend. Michael’s memory of that affair is rather hazy—what with the cocktails, retsina, and ill-considered amounts of ouzo—and mine's not much better, but we both rolled back the tapes in our head to describe the festivities for Nicky and Booker. My four brothers that night, no strangers to family parties getting out of hand, jostled for the order in which they’d give toasts. Doug, in from California, drew the short straw and went last—during dessert—and his rambling, if highly imaginative, remarks are lost to the ages. I do recall he was on a riff about stirring fish in a frying pan, which was pretty hilarious, although the marriage metaphor was lost in translation.

The wedding party on May 30 was even more out-of-control; around 100 people, held at the late and great El Teddy’s in Tribeca, a two-minute walk from our loft. To give you an inkling of the merry-making, a friend of mine, a newspaper publisher from the West Coast, who shall remain nameless, left around 11 p.m., telling Melissa and me, “I’m completely bombed, and might get into a fistfight or worse if I stay longer, so best wishes on your trip to Sardinia!” Very gentlemanly, I thought, and we went back upstairs, where various friends, also blotto, cozied up to one another and, as these things go, proceeded later in the night for embarrassing one-night stands.

It was, as any New Yorker could tell you, an entirely different era in the city, pre-Internet, way before all the iconic retailers were forced out of business, and the heartbreaking scenes on the streets when AIDS victims, gaunt and covered with lesions, dotted the landscape. David Dinkins, a spectacular failure as mayor, was still in office (when not on the tennis court) and it’d be more than a year before the grandstanding Rudy Giuliani took over for eight years. I was reminded of this on Monday afternoon as Nicky and I took a cab—the two of us don’t speak Uber lingo—downtown for a regular pilgrimage to Generation Records on Thompson St., a store I’ve frequented for years, mostly to find obscure CDs that were once called “bootlegs,” but now displayed alphabetically, with no secret handshake required with the clerk to gain access to the material.

The racks at Generation, and its sister store, Bleecker Street Records, were thinner than even six months ago, and I hope that’s a temporary situation, although with last month’s closing of Other Music on E. 4th St., I’m dubious. (I was specifically looking for a Stones CD, Unsurpassed Masters, Vol. 4, which includes the never-released “Cocksucker Blues,” for my brother Gary, but no luck. It would’ve been perfect for Beggar’s Banquet or Let It Bleed, but I guess the lyrics were too rude even for the nasty Stones. I did snag Vol. 3, opening with an outtake of “Street Fighting Man,” called “Did Everybody Pay Their Dues,” which is pretty cool, even if Mick and Keith had the music down, but not the final lyrics.)

In any case, Nicky and I walked up Lower Broadway, from Houston to Union Square, and I swear the stretch of road was nearly desolate—a fair number of pedestrians tripping over each other and still holding onto their phones, and an asshole bicyclist who upbraided me for being in his way as he rode on the sidewalk, which elicited an unanswered “Fuck You!” from me—as far as the number of vanished shops and non-chain eateries I used to frequent when I worked at the Puck Building. Banks on every block, a Time Warner cable store, a GNC vitamin outlet, a couple of beaten-down bodegas, and nothing, in other words, to check out and do some browsing. Sure, The Strand (my bet is the bookstore will soon be awarded “historic” status, cementing its future) remains, but that’s about it. Twenty years ago, there was a great Hudson News shop near 8th St. where I went at least twice a week for its regular roster of magazines, out-of-town-newspapers and foreign periodicals, but obviously there’s no monetary justification for keeping such an anachronism open today. Nicky remembered the GameStop location where I used to take him and Booker on Saturday mornings, which was diagonal to an excellent Barnes & Noble that’s similarly bitten the dust.

I’m telling you nothing new, just a further cataloging of Manhattan slowly losing its identity in the 21st century. The city is a different kind of vibrant—and, unlike most other urban areas, hasn’t completely succumbed to Chipotle’s and the like—but walking down memory lane sure isn’t as much fun as it used to be.