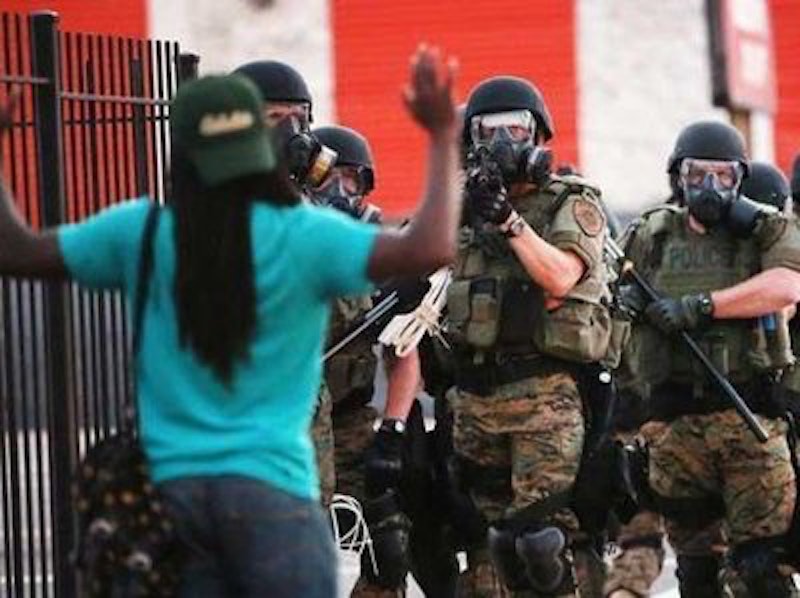 Another week here in the imperial metropole and another slaughter of a Black by the shock troops of our police state.

Paleocons such as I tend to take divergent tacks when it comes to police violence against the Black. For the more populist among us, such as Patrick Buchanan, such violence is to be deplored—but it is also to be understood as a phenomenon tied to what is, unfortunately, the verifiably higher crime rate of the Black.

I am not much of a fan of Mr. Buchanan. I have always found him to be a Hibernian roughneck, and one with too much of a sentimental attachment to the Great American Unwashed. Besides, at the risk of inviting mockery, I like to consider myself a member of a more intellectually rarefied tribe of paleocon Kremlinophile (along the lines of the glorious prose stylist Greg Djerejian, for example—not only a fine wit, but a handsome fellow into the bargain).

In short, I do not agree that the Black “has it coming,” as acolytes of Buchanan might put it. Rather, I see police violence against him as a symptom of what journalist Philip Weiss—one of the righteous among the Sons of David—has called the “Israelification” of the American law-enforcement agencies.

Those who do not read Mr. Weiss’ fine Mondoweiss website are advised to start doing so, tout de suite. Mr. Weiss is a leftist, of course. But he is the type of leftist—gloriously anti-Israel, dead-set against the thugs of the American Jewish Establishment, and sympathetic to the just and theologically grounded foreign policy aspirations of the Kremlin—whom a paleocon can embrace, and work with. (Mondoweiss has admirably published Scott McConnell, founding editor of the American Conservative magazine and an icon in America’s Russian Orthodox convert community.)

And Weiss has been crucial in calling attention to the extent in which American law enforcement and security bodies, mostly on the federal but also on the local level, have assumed a level of paranoia and violent militarization that makes them a menace to decent people, particularly American Blacks; and to the fact that this is largely due to the inculcation of an “Israeli” mindset in the American establishment, especially in its security establishment.

Weiss is at pains to describe why this fascistoid Israeli mindset is so prevalent amidst the American elite. In short, it’s because the American and Israeli elites significantly overlap, when they are not identical in the first place. A list of those citizens of the U.S. and Israel (or both) who slither with facility between the twinned moral cesspools of Washington, D.C. and Tel Aviv would be longer than the line that would result were you to line up, head to tail, all the smoked whitefish consumed by Goldman Sachs’ most voracious usurers since last Sabbath Saturday; longer than the queue that congressman form when they assemble for the monthly disbursement of AIPAC’s shekels; longer than Rabbi Schneerson’s unkempt beard.

At the top of this list we might put New York Times columnist David Brooks, whose son, as Weiss reminds us, is or was a member of the Israeli Defense Forces; Establishment journalist Jeffrey Goldberg, a former guard in an Israeli prison; Las Vegas tycoon Sheldon Adelson, committed to the subversion of what’s left of American republican democracy in the interests of the Zionist project; and Sen. Charles Schumer, of whom it might be said that he represents Israel in Washington, were that not redundant—after all, he represents New York. Then there is Netanyahu himself, with his deep ties in Philadelphia.

It should be no surprise that the stormtroopers of the American state are more and more prone to slaughter the Black. After all, their bi-national puppetmasters are the same who have perfected our era’s genocide against the Palestinian Arab. These grinning demons—pulling their strings, wiping the blood off their lips with their sleeves—can do no different. They act as they do because they are who they are: they are Israel, and Israel is they.

The next time, then, that an American Black meets his end in a policeman’s bullet, note well: the Zionist is behind it. Oh, yes, don’t be deceived: He is behind it. He is not alone behind it—but he is behind it all the same.