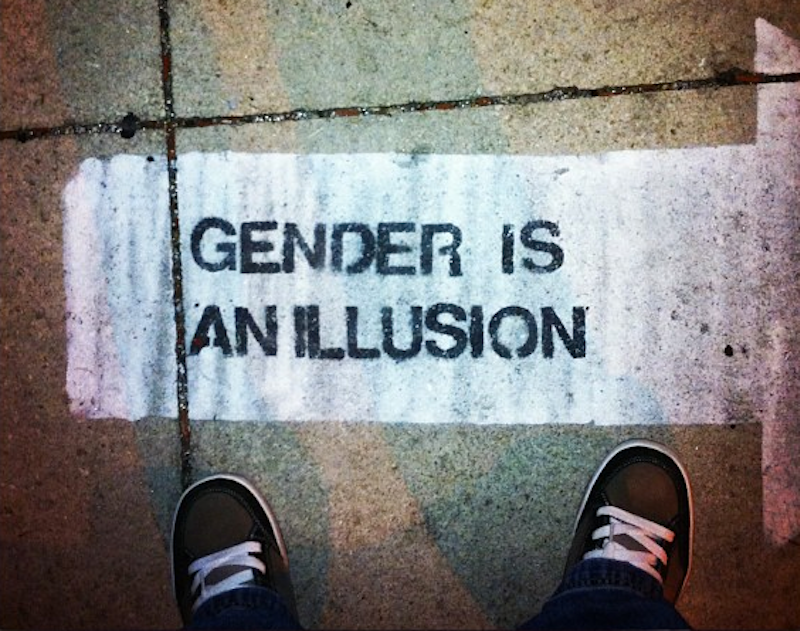 Earlier this week on Splice, Alison Rhea wrote about their experiences as a young genderqueer person, with all the passion and confusion that word implies. I was glad to see it go up, especially since I’ve been the only out trans writer here since October and it’s nice to have some company. While I now count myself as (for the most part) a binary trans woman, I didn’t always—I considered myself to be genderfluid for the better part of a year, until I allowed myself the time and space to explore exactly who I wanted (needed) to be. While I don’t exactly envy Alison’s in-between status, I also recognize the freedom it affords in many ways, and I’m happy they’re on the road to vocal self-love.

Hearing this may shock you, but not everyone on the Internet agrees with me. Later that day, I was served a pile of shit that I didn’t order but was apparently intended to enjoy; via Twitter, William Bond replied with barely-suppressed glee that “this ‘triggers’ me quite a bit…” Bond, operator of the Baltimore “Corruption Wire,” describes himself as a “civil rights activist, advice columnist… and pretty good Italian cook.” This just happened to be a dish best served not at all.

I could make this about trans issues, but don’t have to; Bond’s comments, coming as they do from an older, white, cisgender male are filled with all the garbage Millennial activists of all stripes have come to expect from Gen X holdouts like Bond. The apparently-laughable concept of the “trigger warning”—a written note or verbal cue indicating potentially disturbing subject matter for sufferers of trauma—has become shorthand for anyone who’s over 40 and/or considers themselves “alt-right” to refer to the perceived weakness of the world’s newest crop of humans. Bah, they cry, chortling with ridicule! What kind of bleeding heart needs a warning for words?

Well, for starters, maybe Bond. He might get mad at me for this, but his story’s not one for the faint of heart, so I’m laying down a trigger warning for discussion of violence and verbal abuse. (As we Millennials say, sorry not sorry.) Speaking to The Washington Post in 2009, he accused his late father of “subtle psychological abuse” which, by his own stylized account, drove him to patricide at age 17: “What’s worse? I hit you one time in my kitchen, or every day for 10 years I tell you, 'You're no good.'” One day in their garage, Bond’s father told him he “never wanted [him]”; less than five minutes later, Bond was a killer.

I bring this up not to shame Bond for his past, but to criticize his aloof, condescending rhetoric toward a young person whose life, identity, and struggles seem oddly beyond his comprehension. What I do expect him to understand, on a fundamental level, is simply that words have power—and that those who have been injured traumatically deserve protection from words that might easily hurt them further, or arrest their recovery.

But maybe Bond is among those who considers himself stronger for his experiences; perhaps he believes that it’s necessary to be hurt repeatedly to grow into a worthwhile person. I’ve nothing to say to that except that it’s a laughably simplistic manner of analyzing a person’s psyche. Microaggressions are real; I’ve written previously about how using someone’s personal pronouns (whether or not you consider them “real” or “grammatically proper”) affirms their existence, while refusing to do so (or mocking their identity outright) is an inherently violent act. Harming a person’s identity is no less real than damaging their body: the immediate damage may fade, but there are often consequences that aren’t apparent for months or even years.

Still, I’m not the one Bond and his contemporaries need to answer to. That dubious honor belongs to people who suffer from trauma, like Molly Miller, who writes that trigger warnings are a “common courtesy to help prevent sufferers of PTSD, like me, from reliving our trauma.” These aren’t made-up concepts created to help college students avoid looking at icky things in bio lab. They’re real, they affect people’s lives, and it’s time people like Bond get a clue about how the next generation intends to redefine civil interactions.

That said, I did send him a GIF of Chris Pratt flipping the bird, so I’m not very nice either.