Beer to spies to yoga on 3rd Avenue. 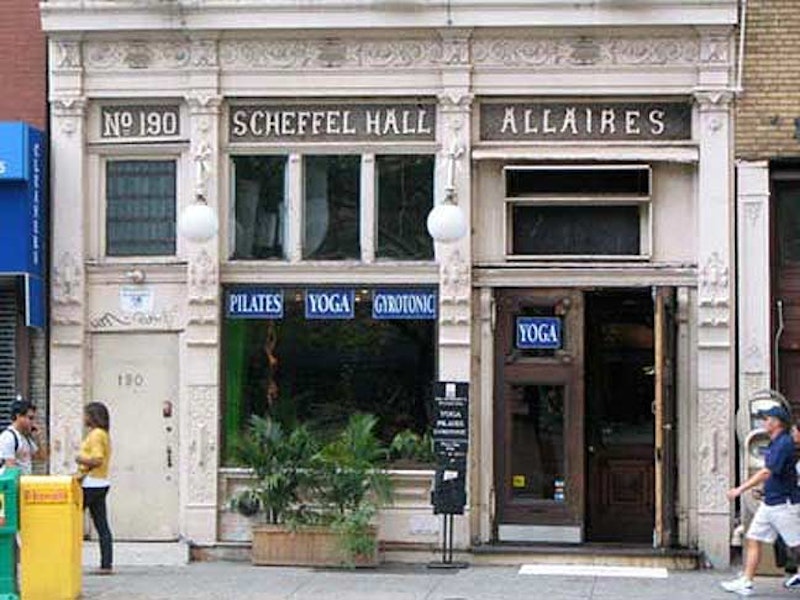 There’s a storefront at 190 3rd Avenue in the Gramercy Park area between East 17th and 18th Streets that appears to have been unchanged since the 1890s, and, for once, this is a case where the storefront is, in fact, unaltered, or nearly so, instead of just being a reasonable facsmile.

We see here a remnant of Kleindeutschland, the German neighborhood decimated by fire from the General Slocum excursion boat in 1904; a recollection of a mostly forgotten writer; and a remembrance of a (reputed) nest of German spies during World War I. 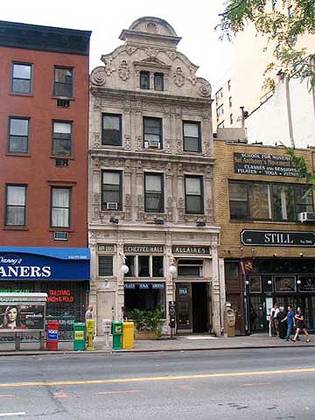 Scheffel Hall was constructed in a German Renaissance style with a distinctive scrolled gable in 1894. The ground floor was originally a beer hall patronized by the then-substantial German population in the neighborhood. It was named in honor of Joseph Victor von Scheffel (1826-1886), a German-born poet and novelist. 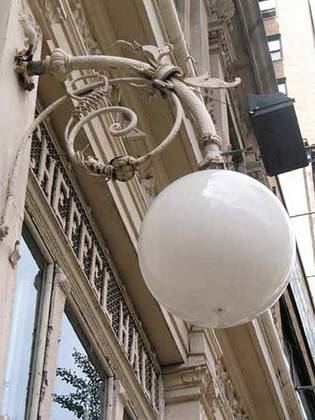 The wrought-iron letters spelling out the address, “Scheffel Hall” and “Allaires” identifiers have held up incredibly well over the decades, as have the two scrolled lamp fixtures. The Hall was once an L-shaped building with frontage on East 17th Street and the ground floor was a restaurant ran by Augustus Van Horn Stuyvesant, a direct descendant of Pegleg Pete himself.

In the 1910s, Scheffel Hall was the home of Allaire’s, a meeting place for local Germans and, some say, a major nexus for German spy activity during World War I. In the early 20th century it was also a music hall/restaurant frequented by area cognoscenti, including O. Henry, who immortalized it as “Old Munich.” Later, it became the German-American Rathskeller, Fat Tuesday’s Jazz Club and Highlander Brewery. These days? Scheffel Hall, which started as a place where you could get beer and pretzels, is now a yoga and pilates studio where young women turn themselves into pretzels. 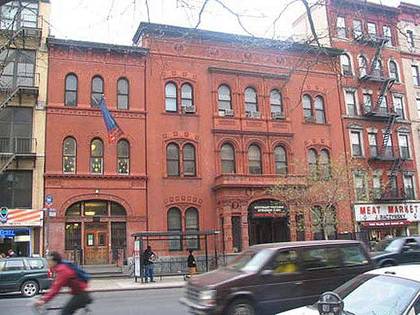 Elsewhere in the formerly German East Village, two deep-red brick buildings on the west side of 2nd Avenue north of St. Mark’s Place appear as if they were built at the same time and by the same architect and indeed, both were designed by William Schickel and completed in 1884. The Freie Bibliothek und Lesehalle (Free Library and Reading Room) and next door, the Stuyvesant Polyclinic, are both remnants of Kleindeutschland, the primarily German population that lived in the area in the late 1800s to early 1900s.

The General Slocum steamship disaster, which killed over 1,000 East Village and Lower East Side residents, and America’s entry into World War I served to dissolve the clinic’s early German association, however, but the German inscription can still be seen over the library, now the Ottendorfer Branch of the NYPL. The facade of the clinic is festooned with busts depicting both real and mythological physicians and scientists of the classic Greek and Roman eras (such as Aesculapius), and also from the Europe of the 1880s (Anders Celsius).