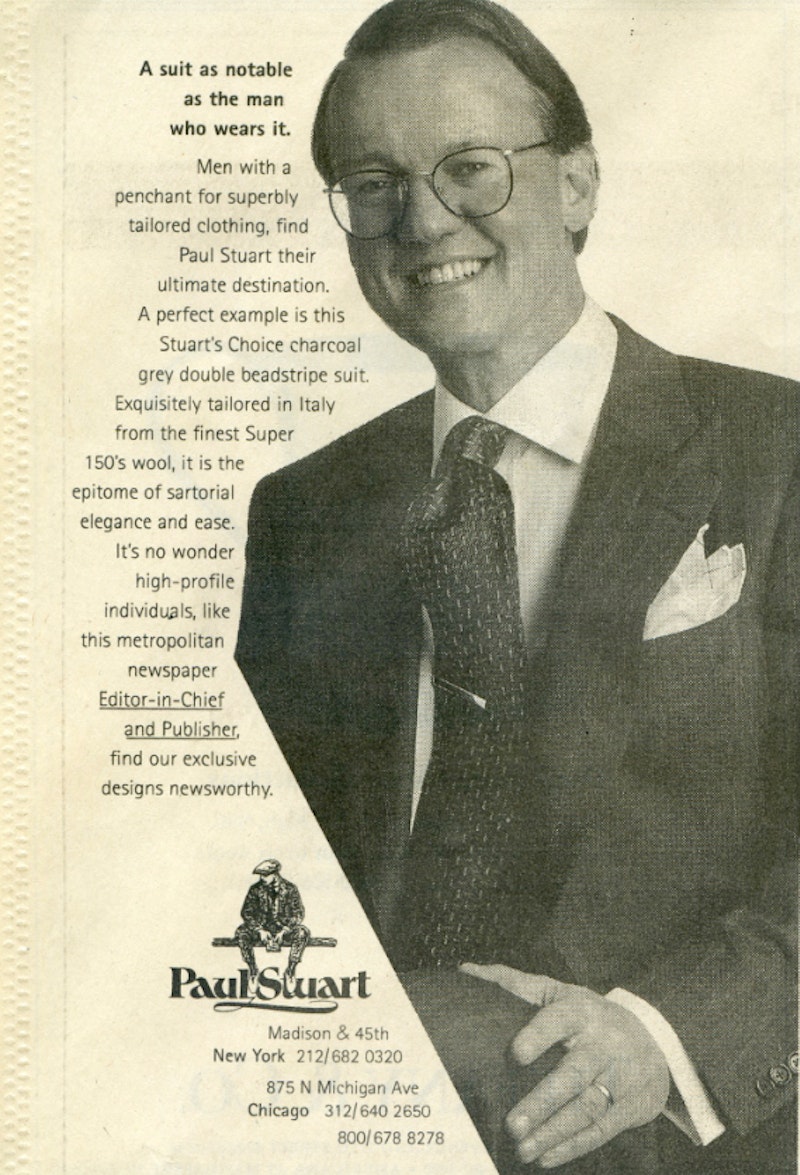 The front page of The New York Times on April 15, 1999—the paper’s first section was 32 pages, stuffed with ads, just to give an indication of how the industry’s fortunes have plunged in a mere 17 years—was dominated by Kosovo stories, as well as one headlined “House Democrats Renew Effort To Pass Campaign Finance Bill,” and we know how the latter turned out. More notable, at least to me and the family, was a Paul Stuart advertisement on the top left corner of page four, which had a shot of yours truly decked out in a “charcoal grey double beadstripe suit. Exquisitely tailored in Italy from the finest Super 150’s wool, it is the epitome of sartorial elegance and ease. It’s no wonder high-profile individuals, like this metropolitan newspaper Editor-in-Chief and Publisher, find our exclusive designs newsworthy.”

For the record, I didn’t find the suit “newsworthy” or even one I’d consider purchasing, but that’s the modeling biz, even if my career in that field lasted exactly one day. How this came about was a bit odd: I’d been a regular customer at Paul Stuart, starting in the late-80s, and had built up a rapport with a salesman named Dave, who, working on commission, would hustle over to me as I walked up to the third floor of the flagship store on Madison Ave. One day, knowing that I was the owner of New York Press, he rang a marketing gal, who told me the store was looking for “professionals in Manhattan” who, as the custom of the time dictated, wore suits to work. Translated: an experimental campaign with regular blokes (sorry, Brexit hangover) like myself instead of the usual crop of uncommonly attractive men and women. I think the series was a flop, but I did enjoy the fleeting notoriety. I did have one stipulation before agreeing to spend three hours at an excruciating photo shoot on 7th Ave: in addition to the Times, Paul Stuart would have to buy four ads in New York Press. (Assistants applying make-up, fluffing up the pocket square, three changes of shirts, the whole shebang.)

I was reminded of this detour in my career as the publisher of three weekly newspapers the other day when my wife Melissa, remembering the go-go 90s (in the argot of the time), spoke about the array of wildly diverse columnists NYP printed in the 90s—Jonathan Ames, Amy Sohn, Mistress Ruby, Bill Bryk, Todd Seavey, George Tabb, Alan Cabal, Spike Vrusho, John Strausbaugh, Jessica Willis, Sam Sifton, Andrey Slivka, Mike Doughty, Bill Monahan, Howie Kaplan, Phyllis Orrick, Armond White, Alex Cockburn, Chris Caldwell and Jim Knipfel just off the top of my head— a decade that’s now nostalgia grist for Millennials and a fond memory for those of us who worked in a profession when articles weren’t “clickbait” and attention spans were at least a minute or two longer.

I haven’t the foggiest about how Paul Stuart—my men’s store of choice in Manhattan—is faring in 2016, but I’d bet a lot more than two bits that the establishment’s profit margin pales compared to ’99. Some claim “luxury goods”—and in fairness, while Paul Stuart’s inventory wasn’t cheap, even in 90s dollars, it didn’t match the prices of, say, Brioni or Sulka—won’t get eaten up by online shopping, but I think that’s a 2012 mindset. Suits, ties and cuff links have largely gone the way of the hat that nearly every man, of whatever class, routinely wore until the early 1960s. John F. Kennedy is famously credited for that fashion evolution, but if you look, for example, at the famous picture of Jack Ruby rubbing out Lee Harvey Oswald on Nov. 24, 1963, most of the men wore hats. I think the hat had simply run its course, along with so many other staples of earlier decades that bumped up against the 1960s.

My favorite Paul Stuart story revolves around my nephew Caleb, a squirt at the time, who was interning at NYP, cleaning street boxes and delivering newspapers. Caleb decided one day that he needed a light-weight suit—why, I’m not sure, perhaps for his nightly raucous soirees with high school friends at Tribeca’s now-defunct Riverrun bar and restaurant—and so on a slow weekday afternoon we walked at a rapid pace up to Paul Stuart from the Puck Building, which I suppose took 45 minutes. It must’ve been near 100 degrees, and Caleb, one of those fellows who sweats even in brisk autumn weather—I haven’t that affliction, a genetic bonus—was drenched when we met up with Dave on the third floor. Dave did a double-take looking at my nephew, but quickly regained his composure and gave Caleb a spare shirt to wear while trying on poplin suits. The tailor, snooty on a good day, wasn’t pleased, but screw that guy: we always sparred about breaks in the trousers anyway. I mean, for years.

I believe the last time I wore a suit was a couple of years ago, attending the memorial—more accurately, sitting shiva—for one of my best friend’s father. Long ago, in the late-60s, my late brother Doug put up a squawk when our dad mandated that all the boys in the family wear ties and jackets for a meal out at Howard Johnson’s near our home in Long Island. “When will people realize that ties and cuffed pants are just costumes,” he fumed, which was met by Doug-being-Doug chuckles from the rest of us. Turns out he was right, although I can’t say that men wearing athletic jerseys—really, who over 21 with an ounce of respect dons a piece of clothing with, say, the name Wieters or Curry splashed across the back—to church or restaurants is preferable.