A walk on Irving Place. 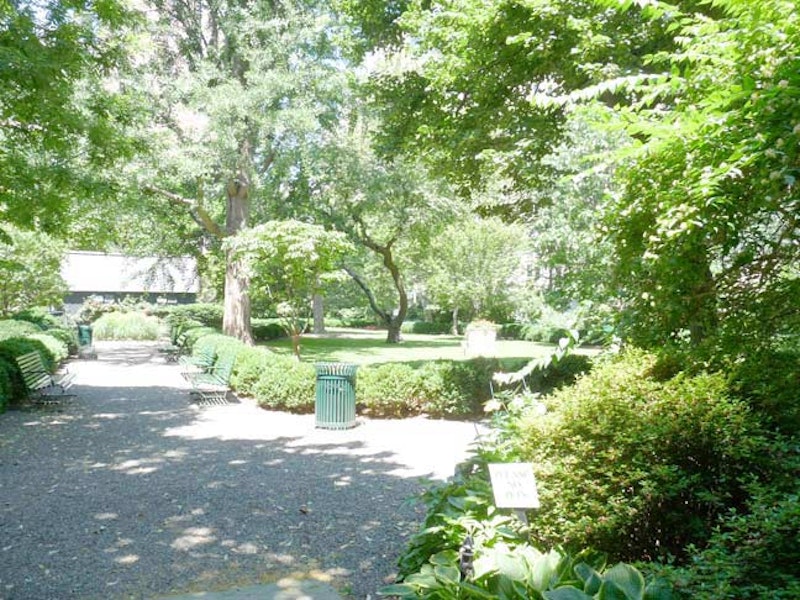 Mere commoners are not permitted into Gramercy Park (a small parcel of a private park between East 20th and 21st Streets and 3rd Avenue and Park Avenue South). You must be a keyholder at any of the buildings surrounding the park to enter it (and some selected buildings in the area, as well). After circumnavigating the park, I headed south on Irving Place.

Irving Place, like nearby Madison Avenue, is named for a historical figure. Unlike Madison, though, the person Irving Place is named for was still among the living at the time, and was at the height of his literary career. Washington Irving (1783-1859), who met his namesake George Washington while a young boy, was popular both in the States and in Europe for his essays and fiction, and was the creator of Ichabod Crane, Rip Van Winkle, and the tricornered Father Knickerbocker, NYC’s mascot.

Union Square, Irving Place and Gramercy Park, as well as Lexington Avenue, the northern extension of Irving Place north of the park, were laid out and begun by developer Samuel Bulkley Ruggles in 1831. They all were originally part of his property. 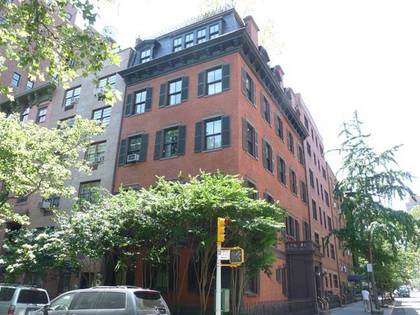 The Stuyvesant Fish House, on the southeast corner of Gramery Park South and Irving Place, is the second “Stuyvesant-Fish” house in the general area, the other one being at 21 Stuyvesant Street, constructed in 1804 by Petrus Stuyvesant as a gift for his daughter when she married Revolutionary War hero Nicholas Fish, who served with Washington at Valley Forge and at age 18 is still the youngest Major in US Army history.

This building, though, has no hyphen in its name because it was lived in by family scion Stuyvesant Fish. It was built in 1845 and lived in by Fish until 1900, and it was later occupied by famed publicist Benjamin Sonnenberg beginning in 1931. 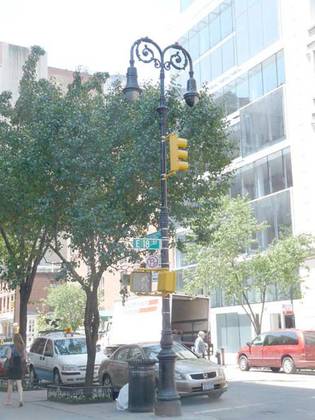 As far as I know, this is the only Twin Bishop Crook in NYC, at the SE corner of Irving Place and West 18th Street. In the early 20th Century cast iron era, a specialized Twin post was produced to illuminate the more important boulevards in Manhattan (5th Avenue specialized in them from 1892 until 1965; today just a few remain). In that original cat iron lamppost era, no twin Bishop Crooks were ever produced, and his one, installed in the 1990s, is one of a kind.

Note also that the sidewalk side of the diffuser bowls are blacked out so harsh light doesn’t enter the buildings facing the lamps, and the two different “Bell” luminaire styles. On the left is the Bell introduced in the 1980s when castirons made their comeback, while the one on the right matches the older Bell styling of the 1930s and 1940s. 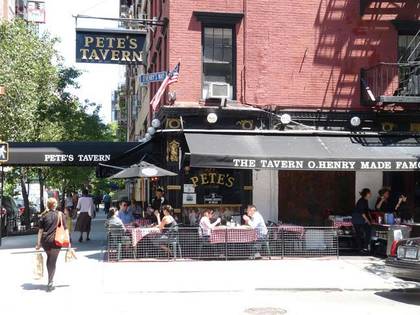 There are a number of taverns in NYC jostling and vying for the title of the city’s oldest bar in continuous service. McSorley’s, on East 7th and Cooper Square, claims the title. But there’s also the Bridge Cafe in the Seaport neighborhood. Pete’s Tavern has also joined the battle, though it was temporarily closed after Hurricane sandy hit lower Manhattan in 2012. It’s all a matter of semantics, as Pete’s is billed as "New York’s Oldest Original Bar." Neir’s, in Woodhaven, Queens, may outdate them all, as its management states it has existed as a bar since 1829.

The building Pete’s occupies was built in that same year, 1829, and featured a grocery (in previous centuries liquor was sold and consumed in groceries) by 1851, with a more specific saloon called Healy’s in place by 1864. It was operated as a flower shop hiding a speakeasy during Prohibition days, after which Peter “Pete” Belles purchased it, giving the place the famed name. Since the 1950s, an Italian menu has been featured, though traditional bar food like burgers and steaks are sold too.

Before and after Prohibition Pete’s was frequented by literary types such as William Sydney “O. Henry” Porter (as in the old Lion’s Head and White Horse Taverns in Greenwich Village). 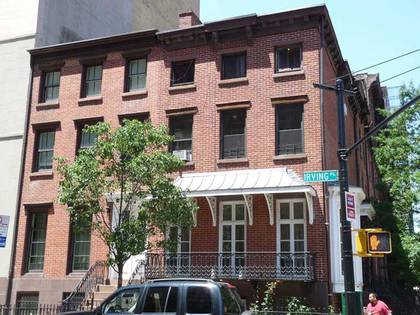 Despite a local legend, there is no evidence that Washington Irving lived here at 122 Irving at East 17th Street—although Edgar Irving (reputed by some as his nephew), lived at #120, next door—and had a son who he named Washington. The building was constructed in 1844.

Beginning in 1892, the building was occupied by actress Elsie DeWolfe, who became a prominent interior decorator, and her partner, literary agent Elisabeth Marbury, who jokingly called themselves “The Bachelors.” The story of the Algonquin Round Table, with its collection of writers, actors and wits, is often told—but no so much The Irving House, where The Bachelors invited George Bernard Shaw, Sarah Bernhardt, and Oscar Wilde in for tea, among other luminaries of the times. It’s possible that DeWolfe began the rumor that Irving had lived here. 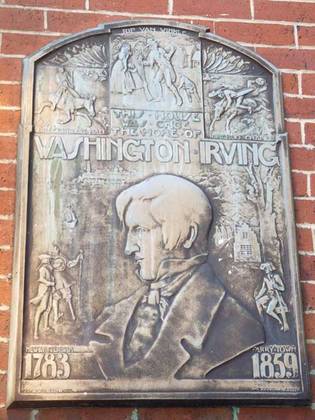 One of the handsomest historic plaques in town can be found mounted on the building—it even has its own lamp for nighttime illumination. It features Irving in profile, his birth in New Amsterdam, the future NYC in 1783, his death in Tarrytown in 1859, a scene from his collection Bracebridge Hall, and depictions of Rip van Winkle and Ichabod Crane.

Its assertion that “This house was once the home of Washington Irving” is all wet, though. At the bottom are the inscriptions “New York, 1934” and “Fecit A. Finta,” indicating the work of Hungarian sculptor Alexander Finta (1881-1958). 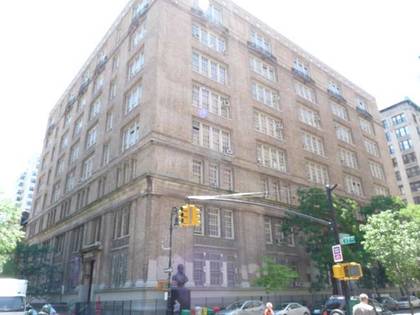 Washington Irving High School, across from the Irving House, was constructed from 1911-1913 as Girls’ Technical High School with C.B.J. Snyder, the premier architect of NYC schools, its primary designer.

The insides are like a museum, preserving a generous sampling of furnishings and art—featuring beautiful oak panelling in the lobby and a series of murals, one 1915 series in the lobby by Barry Faulkner, a gift to the city by the Municipal Arts Society depicting scenes from early Manhattan; another from the same year on the back wall of the auditorium by illustrator Robert Knight Ryland depicting Dutch and Indians trading; a 1932 series in the front of the auditorium of female figures resembling the Greek Muses by J. Mortimer Lichtenauer; and a 1932 series on the staircases depicting old and new Manhattan by Salvatore Lascari. Sometimes the interior is featured during Open House New York weekends in October and is well worth a visit.

Yet another representation of Irving is here as well: a bust of Irving by sculptor Friedrich Beer, which was originally installed in Bryant Park in 1885 and moved here to Irving High in 1935.