Except for maybe a summer backyard night. 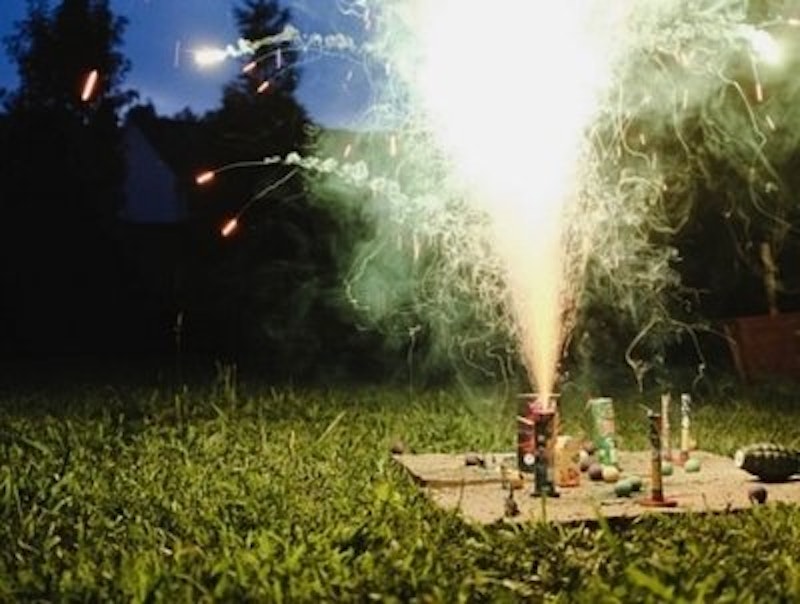 I was never a big fan of fireworks shows as a kid, probably because we never went to the big professional shows in the city. We usually relied on some dad in the apartment complex to spring for some decent ground-based stuff to set off in the backyard. We popped those little white-tailed cap-things (my kids still love them) on the sidewalk, and I remember some black snakes that came in a box that you’d light and they left a mess on the sidewalk. Sometimes we’d watch fireworks on TV, could hear the distant fireworks shows around Philadelphia, and once in awhile we would go to see the township shows in King of Prussia.

I didn’t like sparklers, the way they prickled at your skin, the heat from how close they got to your fingers. I’d always throw mine high into the sky: I thought that looked cool for a second before it plummeted to the grass, crackling there for a second before going out, my mom yelling for us to go find it before someone stepped on it in their bare feet and got burned.

I once went to an outdoor Baltimore Symphony Orchestra performance that featured patriotic music and fireworks, complete with the 1812 overture at the end, and that was probably my favorite fireworks experience, even though I can’t stand crowds, because the fireworks were just a sideshow to the music.

On Tilghman Island, where I write and have rented a few different writing cottages, on July 4th you can watch across the Chesapeake Bay from the Eastern Shore of Maryland to the Western Shore, and see up to six different fireworks shows happening at one time, however distantly. My kids have had fun trying to watch them all at once, swiveling their heads back and forth, yelping “there goes one!” as they watched a stretch of 30 miles’ worth of shoreline towns setting off their fireworks shows from across the span of the bay, in miniature.

My brother, who won the Bronze Star for his two-time combat veteran service in Iraq, posted a Wounded Warrior Project link on Facebook the other day reminding folks that for veterans, fireworks shows can be a PTSD trigger. For him, he wrote, as long as he’s the one setting them off, he’s okay, but that he doesn’t like to attend big shows because of the noise.

This year, he and his longtime girlfriend—who I adore and by now consider my sister-in-law—will be at my house and he’s bringing lots of fireworks to set off for my kids to enjoy while they swim in the pool. Our neighborhood, far out in the country, loves itself some July 4th patriotic displays, so there will be a competitive cacophony of bright lights, cackles and whistles tonight. Even though I’ve never liked the noise, and can’t stand watching and worrying while my brother and husband set them off, I love hearing how excited the kids are to see the show, or the frenzy of the neighborhood’s competing shows. Honestly, listening to how excited grown men can be to act like little kids, laughing in silhouette on a summer night as they set off their colorful, sparkling toy rockets can be pretty fun too.