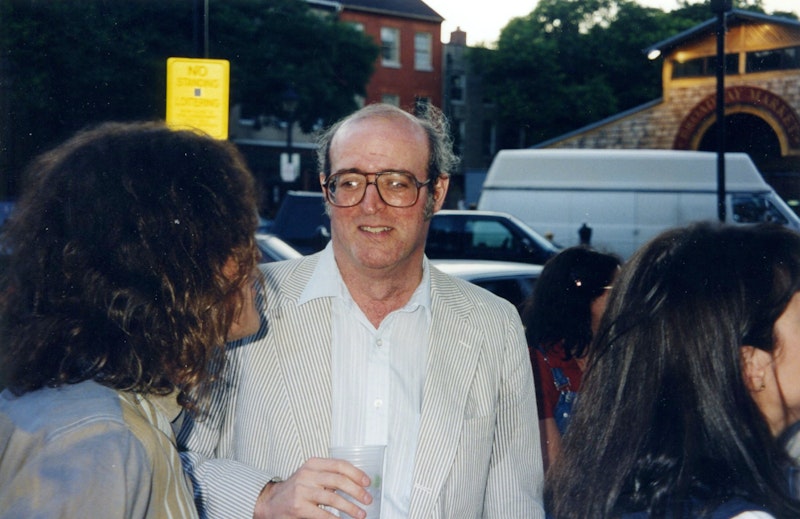 I was a crummy student at Johns Hopkins in the mid-1970s. Worked like a dog in high school to get accepted, but once there, knowing I wouldn’t apply to graduate school, a simple diploma was fine. If I wanted to dress down this profligacy, I could say it was part-time jobs and working round the clock at the school paper, The News-Letter, that exacerbated my poor academic standing, but in fact, that wasn’t the case. I studied hard for classes that interested me, and did okay, but mostly it was a skate-through. JHU was pretty strict in those days: as an English major, I was required to take at least two science courses—for which I had zero aptitude—and the real kicker is that you were allowed just two D’s in the 120-credit mix. I used up those D’s by first semester, sophomore year.

That brings me to the subject of Ken Sokolow (pictured above at City Paper’s 20th anniversary party in 1997), a News-Letter confederate who was a year ahead of me and an exemplary student. Beats me how he did it, since he horsed around with our crowd plenty, but I suppose it was a work ethic that interceded, and besides, he was one of the smartest guys I ever came across, and extraordinarily well-read. He’d hate the comparison, but like Bill Clinton, he excelled at compartmentalization. I’ll never forget one early morning session, at my News-Letter attic office, with Ken, who was supposedly going to help me pass a biology class taught by the late Robert Ballentine. It was eight a.m.—three hours until the midterm—and after about five minutes of cribbing, we instead lapsed into composing lyrics about Ballentine’s class—to the tune of Jackie Wilson’s “Higher and Higher” and The Drifters’ “This Magic Moment”—and as we recorded our parodies on a cheap cassette player, now lost in time, we both got hoarse from laughing so much. The exam did not go well: for the questions I couldn’t answer, instead of leaving them blank, I wrote some nonsensical riffs, which I thought were hilarious. The professor disagreed, was offended, and my grade was 38.

Kenny was a political hound, and in the winter of ’76 he traveled to New Hampshire for the primary, using the alias James G. Burns, and turned in a witty and insightful portrait of Jimmy Carter, whom he disdained. Like many young writers at the time, Ken was infatuated with Hunter S. Thompson and gonzo journalism, but he actually pulled it off. He didn’t indulge in mind-altering substances—he was a moderate drinker and that’s it—but prevailing upon him to meet deadlines was almost impossible, one page at a time. I think he did that to bug me.

A year later when Baltimore’s City Paper was started—first called City Squeeze and initially run out of the News-Letter office until the administration kicked us out—Ken contributed frequently with a column called “Mobtown Beat” and food reviews under the name Leo Gorcey. He was a regular at the poker games many on the staff attended each week, at rotating venues, and while the rest of us got soused and starting dropping hand after hand, Ken nursed a Rolling Rock or two, kept a steady head and usually wound up the big winner. He took me to Pimlico on several occasions, and introduced me to soul food restaurants in West Baltimore like Sampson’s on W. Fayette St. We were regulars at the now defunct Leon’s Pigpen rib & chicken joints.

Unfortunately, at least for the paper, Ken needed a serious and well-paying job, so in ’78 he took off for West Virginia, toiling for the government. He didn’t care for the environment there—I mean, who would?—but stuck it out until, sadly, his splendid father passed away and he was called back to Baltimore. He hooked up with another government agency, punching the clock, but didn’t write much anymore, although we’d see him on various occasions. A pity, I thought, since he had natural talent as a journalist, and could’ve written his own ticket for any number of prestigious publications, but he had other ideas, and I wasn’t presumptuous enough to question his choice.

In 1987, on the occasion of City Paper’s 10th anniversary, published on June 19th—Alan Hirsch and I sold the paper several months later—I coaxed, probably with a bribe, Ken into coming out of “retirement” to contribute a column. An excerpt: “I doubted [the paper] would last 10 issues, let alone 10 years… [But] City Paper is still around to remind us of 1977. For all its limitations and sins, it is testament to what a few persistent kids who refused to be cowed by the sounds of many doors slamming in their faces could accomplish. Keep in mind that this paper was not always a yuppie ad sheet with more advertising reps than writers… And as a ghost from the past, I will continue to haunt those idealist-turned-businessmen who run the paper, to goad them to be true to their roots.” Typical, unvarnished Sokolow: mixing in barbs with the sweets.

Today, Ken still keeps a low profile, reading as always, and following the Orioles. I refuse to give up hope that one day he’ll pull a William Kennedy and publish an award-winning novel.