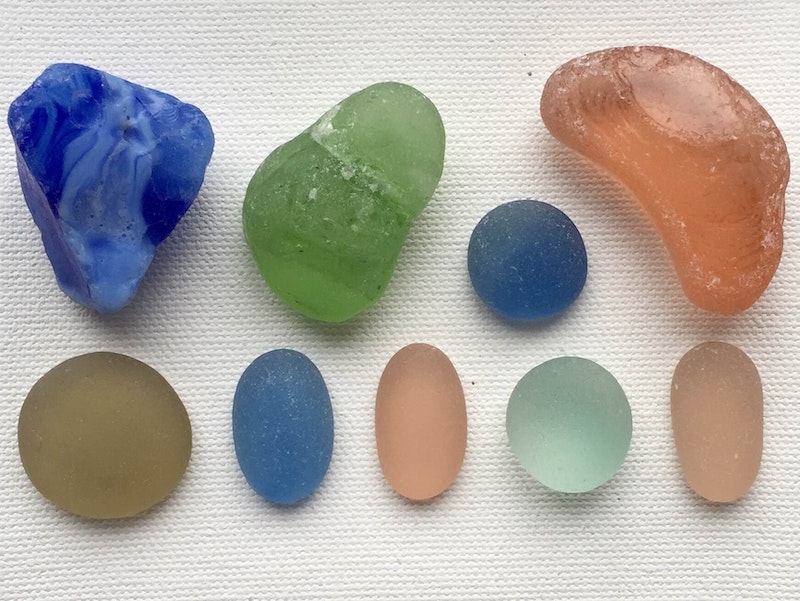 The last place I thought I’d find fake sea glass was at the most famous sea glass beaches in the world, yet I guess it makes sense that there’s an abundance of it there. Both Fort Bragg and Davenport, California, sought after for their stunning and rare sea glass experiences (though very different), both have fake sea glass washing up just like the real stuff.

At Fort Bragg, the local sea glass museum actually sells “seed glass,” which is fake sea glass you can buy to throw in the ocean “for the next generations of sea glass hunters” or some such nonsense. Makes me sick. Don’t throw broken glass in the ocean. It’s littering. In addition, it takes away the history and provenance of the glass that exists on the beach to begin with.

Yes, the glass is trash already. Someone carelessly threw it out—over the cliff, off a boat or into the dump. But over time, and years, and thousands of tides and storms, it has washed up on the beach, and is now being collected. If some kook comes along and pitches a $2 bag of chunky new rock-candy looking crap (or a bag of dollar-store marbles or worse, vase beads) back into the water, that’s a whole new kettle of fish. Sea glass hunters are confused. They think it’s real. They post photos on Facebook and Instagram saying things like “look at this lovely aquamarine-hued sea gem heart of the ocean I have found-slash-bought at auction, isn’t it the most lovely mermaid treasure that ever the Neptune-Poseidon hath offered?” (No accident some of these pieces are shaped like jewels, since they would've eventually been set into jewelry and sold that way.)

And I have to look at the photo and say (to myself, of course, not in the comments section, though it’s tempting) “Holy crap, that was lining the bottom of a fish tank two weeks ago, dude.” And it’s annoying. The mermaids love “jewel” looking things, so they throw this stuff in the ocean hoping it will “come back to them”—oval-shaped pieces, heart-shaped pieces for crying out loud, like that came from a bottle.  And the latest thing on the sea glass auction pages that people spend huge money on is pieces of sea glass that magically have images of nautical things or portraits on them. I’m happy if you show me a piece of sea glass with an anchor on it, but show me the source: yes, there are bottles and bottle bottoms that had anchors on them, and there are reference books that tell you the years those came from (I’m enough of a sea glass nerd to look them up). But don’t show me a turquoise anchor-shaped etched anchor with engraved rope detail on it and say you found that on the beach. I’m fine with artists who make items like that: sea glass art is a whole separate, perfectly fine thing. But trying to fake a beach find is not cool, and it’s happening all over the place. If it looks and feels in your hand like it's too good to be real sea glass, it probably isn't. Know the source.

Sea glass Facebook groups have entire discussions about how to identify vendors who sell fake sea glass. In China and other parts of the world, bulk fake sea glass and marbles are sold on eBay, Facebook sea glass auction sites and craft shops every day. Some fake sea glass sellers are better at it than others, using undersea cages to tumble the glass to a natural-looking appearance, making it difficult to tell the difference. Already, real versus fake sea glass can be difficult to identify to anyone but an expert, as even sea glass from the same ocean can have different textures depending on the pH levels in the water, the glassmaking process, age of the glass, and other factors. Knowing the exact source of the glass or the person who beachcombed it is the best way to know if sea glass is real or fake.

I was surprised to find it at Davenport, California where the glass supposedly comes from a single source, the Lundberg Art Studio, so it could reasonably be assumed that all of the glass went into the ocean between 1970 when the studio opened and sometime say in the last 20 years when the studio was banned from dumping the waste glass. In fact, there's all kinds of "sea glass" on that beach for a number of reasons. Because Davenport is such a huge tourist sea glassing beach, immigrant workers sell glass to tourists on the weekends, risking safety by climbing up and down the hazardous cliffs to collect it. The art studio up the hill sells their current scrap glass for $15/bag. Individual Davenport sea glass pieces sell onsite and online for anywhere from $10-$100 apiece, and more for rarer pieces. If you were risking your life to get a piece you could sell for $100, and you could buy a whole bag for $15, wouldn’t it benefit you to buy a few bags, and maybe chuck some in the ocean, to keep the supply coming? Of course it would. Hence the large number of partially-tumbled pieces that are found daily at Davenport. They could’ve been thrown in the water yesterday. I found a few pieces that I’m sure were. (examples in photo: the upper left is a clear example of a Lundberg art studio piece in new condition, the others have little to no wear or are clearly “seeded” newer pieces of unusually perfect shape and smooth surface). I actually thought it was fun, almost an Easter egg hunt, to keep fake sea glass in a separate Ziploc bag, but I hate the idea that sea glass hunters who don’t know the difference are keeping these “treasures” as genuine sea glass when they are actually brand new art glass or tossed-in fish tank glass.

This year at the North American Sea Glass Festival Shard of the Year contest (often entered by up to 1000 pieces in 10 categories), judging rules have changed a bit. Now, if someone tries to turn in their engraved pink glitter mermaid that allegedly washed up on the sand but was really bought on an auction site, it won’t get a second look by judges. Everything has to be personally beachcombed by contest entrants. NASGA reports it’s trying to discourage people from submitting pieces they do not know 100 percent are genuine.