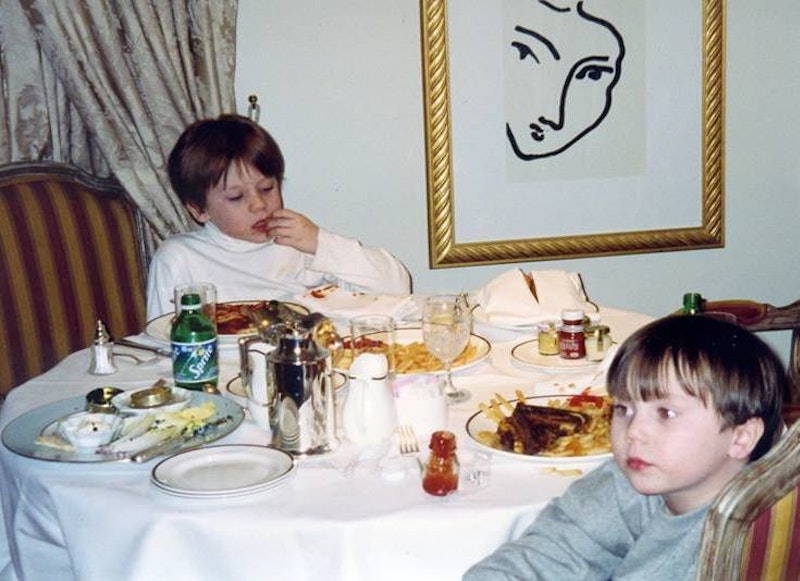 One paragraph from The Wall Street Journal’s Lauren Lipton’s recent article—the less generous might say quasi-advertorial or “sponsored content”—about top-tier hotels attempting to entice more customers to order room service stuck out to me: “Guests’ tastes have changed with the times, hoteliers said. Younger, more sophisticated travelers don’t want a generic meal in their room; they want to sample the unique local cuisine.”

I suppose that’s a self-serving talking point from the up-and-down owners/managers of hotels, but it doesn’t make much sense because it’s not a new preference. I’m fairly well-traveled, and except for a pot of coffee in the morning, or a room service meal when arriving late—usually after a typical flight delay—it’s rare that I’ll pay inflated prices for a dinner that’s barely superior to the first-class fare in the days before airlines stripped their costs to the bone and gave up any pretense of civility. When my family’s in New York, the best food city in the country, we never order in; opting for low- or high-end Chinese or Indian, excellent Italian or Greek/German or Polish cuisine.

It’s not a matter of “younger, more sophisticated travelers” setting a trend: unless you’re Mike Pence, the fast food gourmand, who wouldn’t want to explore the local food? If you’re in Houston, say, why would you settle for a generic continental meal, when there are so many ribs and Tex-Mex places to explore? Same goes in Miami, where Little Havana features two or three of the best Cuban restaurants I’ve eaten in. Or Boston, where I’ve never seen “region specialty” fried Ipswich clams on a hotel menu. And in Phoenix, there are about 50 superb Thai restaurants that are worth the drive rather than settling for another crummy steak or Cobb Salad at the Biltmore.

Lipton doesn’t stray from the United States, but the same is true abroad, especially in Caribbean resorts. Maybe it’s condescension, maybe not, but even the fanciest spots in Barbados, Nevis, St. Lucia, Antigua, or Jamaica, for example, offer really lousy food both from room service and their restaurants. Food’s an important part of a vacation: why would you settle for overcooked chicken and fries, when, with a minimum of effort you could eat jerk pork, roti, fried plantains, goat stew, conch fritters, or impeccably fresh cuts of fish or seafood stews? It’s one of the reasons I can’t stand cruises—I’ve been on just one, in Egypt 30 years ago, bolted after two days and returned to Cairo—since besides crummy sleeping quarters the supposed “benefit” of “eat-till-you-drop” buffets is a scam. Standing on line at the trough with jaunty merry-makers, waiting to fill a plate with warmed-over entrees, sweaty slices of cheese, and sickeningly sweet desserts isn’t my idea of fun.

The above sounds huffy, I guess, but these travel articles rarely contain much new information, and, as mentioned above, seems underwritten by the subjects. I will allow that when traveling with small kids, the room service equation changes. Kids have a routine, are up at odd hours, and so when our boys were young room service and TV was a way to go (Nicky and Booker are shown above at our suite at Forty Seven Park Street in London in 2000, chowing down dinner; my wife Melissa and I would, once a sitter arrived, visit an old favorite Indian haunt, The Standard in Bayswater).

Lipton does make a good point, which underscores why the amenities of hotels are going the way of Pullman Car trains in the earlier 20th century before airline travel became popular (and more affordable). She writes: “[I]t’s easy to understand why industry experts say a single delivery—which may also include fielding unrelated guest questions like how to turn on the TV—can take 30 minutes. The labor-intensive process requires extra staffing, chefs and managers said, which is reflected in the delivery fees associated with room service.”

Anyone who’s 50 or older—and that comprises a bulk of customers, for business or pleasure—can probably relate, like I do, to the tech upgrade difficulties of hotel rooms. Setting up Wi-Fi has become easier (though it’s usually impossibly slow), but finding the heating/air-conditioning control isn’t easy, and negotiating the key cards to the elevator and room takes a few dry runs. And in certain hotels, like the Mayfair in London, where we stayed in March, you'd have to be Houdini to master the light controls.

In the past 15 years, hotels have become more forgiving about guests bringing in edibles from outside, and I’m not sure why. At one time, you had to smuggle cheaper fare inside, and, if apprehended, the scowl from a staffer was withering. Maybe it’s because every time you open the mini-bar—for hotels that still have them—everything’s electronic and you’re afraid to even touch a Toblerone bar for fear it’ll be tacked onto the bill. I’ve often wondered how hoteliers have compensated for the loss of revenue stream they once generated from phone calls, which were jacked-up to loan-shark fees. Now, since everyone has a cell, that money’s dried up like classified advertisements in the country’s remaining print newspapers.

Growing up, I can’t remember my family ever staying in a hotel when taking trips to see my cranky grandfather in New Hampshire, or visiting various brothers at their Northeast colleges. It was always some dingy motel, though frankly, since I didn’t know the difference, it was still fun. The first luxury hotel I stayed at was by mistake: it was 1975, and my brother was driving his wife, two kids, and me—Mr. Nanny—to Paris from Italy. It was dark, everyone was tired and peckish, and my sister-in-law, after rejecting a number of spots, finally came to the car and said they’d found “suitable” lodgings. Turned out it was the Le Meurice, opposite the Tuileries Garden, and it was a stunner. Oh, and a suite cost $100 night.

After thinking about all this, one question remains: how will hotels change even further when Jeff Bezos/Amazon gets into the game?