Take some tips from The Subway Sun.

Back in the 1940s, every once in awhile, subway cars and stations would become sort of unkempt, and people could be less than courteous. Maybe there’d be a candy wrapper on the platform. Maybe a gent would forget to hold a door for a lady. And shockingly, every so often, someone would try to sneak a smoke next to the token booth.

Enter Amelia Opdyke “Oppy” Jones (1913-1993), a cartoonist who drew a slew of subway posters that gently and humorously called attention to the shortcomings of subway riders in the manners department. The posters were given a faux newspaper masthead called The Subway Sun.

The Sun was introduced originally to warm riders to a fare increase, but the signs evolved to tout technological improvements, highlight travel destinations such as “You too can reach the beach by subway!” and most memorably, to promote straphanger etiquette. The most famous campaign used Monopoly-like cartoon characters, the women often modeled after Oppy herself, to push good manners on a captive audience. Some considered it propaganda, but at least it was entertaining, and it gave the impression that management was paying attention.

Some of Oppy’s posters shamed women passengers about placing packages on adjacent seats, or showed well-dressed women belying their supposed couth by dropping candy wrappers on the subway floor. If Oppy were drawing the Subway Sun posters today, she would probably be decrying subway faux pas du jour, such as “manspreading” or pole hugging. As far as the “Showtime” subway car dancers and gymnasts are concerned, I’m sure that they never entered Mrs. Jones’ wildest dreams. 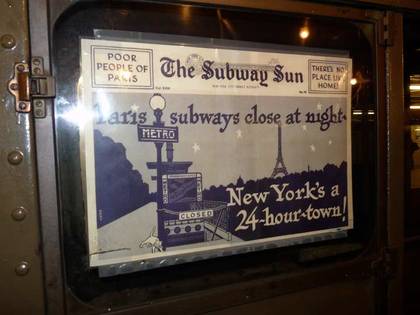 The Transit Museum has preserved a number of Oppy’s Subway Sun posters and displays them in its various Nostalgia Train sets, which are rolled out on occasion for summer weekend excursions and also during December Sundays. Oppy could be more than a gently annoying subway nag. She was also called upon to promote NYC subways in general and also to call attention to the places and events the subways transported us to.

This poster contrasts NYC subways with the Paris Métro. The Métro opened in 1900—predating NYC’s IRT by four years. The claim here still holds, as the first train begins running at 5:30 AM. “Poor People of Paris,” meanwhile, was a popular song in the 1950s, hitting number one for the Les Baxter Orchestra in 1956—likely the date this poster appeared. 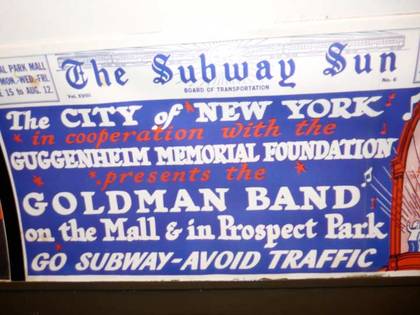 The Goldman Band was an orchestra formed specifically to play outdoor summer concerts by musician/composer Edwin Franko Goldman in 1918. It was his belief that the orchestras recruited to play outdoor venues rarely rehearsed and didn’t take those performances seriously. The Goldman Band’s first major public performance at Columbia University was in 1920, and the band was a mainstay for outdoor orchestral performances in Central and Prospect Parks, as well as other venues, for 93 years.

On occasion, Oppy limited herself to plain lettering in her posters, but she had a distinctive calligraphic style. I don’t think her lettering was ever drawn or digitized as a specific font, though it should have been. 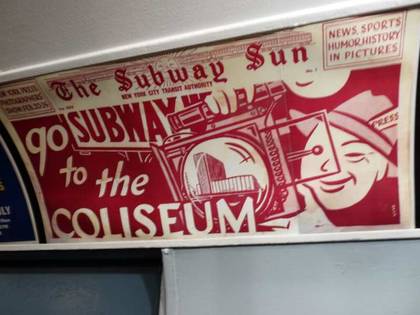 Prior to the construction of the Javits Center on 11th Avenue and West 34th in the mid-1980s, the New York Coliseum, on the west edge of Columbus Circle at Central Park South and West, was the city’s premier exhibition hall (although several of NYC’s armories could have done a much more stylish job). The Coliseum opened in 1956 by the Triborough Bridge and Tunnel Authority on the west side of Columbus Circle. It was demolished in 2000 and the twin-towered Warner Center constructed in its place soon after. 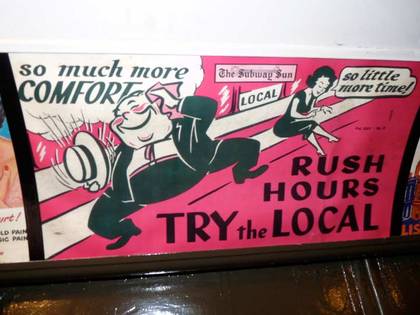 Oppy also doled out commuting advice. This sort of pitch may have worked in mid-century—substitute slower travel for a seat—but when the MTA introduced the V train in the 1990s, which hit all the local stops on the Queens Boulevard and 6th Avenue lines as far south as 2nd Avenue—it flopped and the MTA killed it in the 2010 budget cuts and fare hikes. New Yorkers, apparently, prize speed over comfort during rush hours.

What would Oppy make of the current subway scene? Would she tell miscreants to get rid of the gun after shooting it, or not to reach for your wallets when stopped by the police, or to use box cutters, not razor blades, if you must apply scratchiti? Oppy, where are you when we need you?