The Transient and Disposable Healing of #MeToo

The stain of evil is always there. 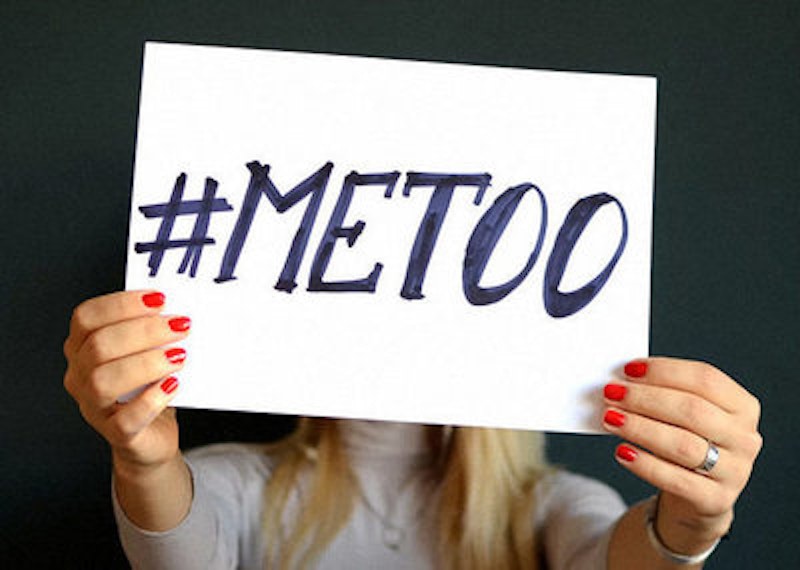 The #MeToo Twitter hashtag is on a train that’s derailing. It invited women, on social media, to write the hashtag #MeToo if they’ve been sexually harassed, raped, or assaulted. Aside from my own repulsion of collectivism, on the surface, it seems like a good idea that might create solidarity. But solidarity in what? Pain? Suffering? And what kind of solidarity? It’s more like a conversation that looks something like this: “Oh you like Pepsi? Me, too!”

Looking at the surface of this collectivist phenomenon, there’s an obvious problem: every possible sexual transgression against women is placed under one category. And so, according to the hashtag world, there’s no difference between sexual harassment and rape.

Another problem is that the hashtag prompt perpetuates the victimhood of women rather than strength. It’s fashionable to throw a pity light on social media. Everyone’s delivering mediocre soliloquies in 180 characters or less and everything’s a tragedy but a tragedy that requires a redemption and a happy ending.

But what else is happening in this strange brew of collectivist pain? The hashtag has created a false solidarity as well as a transient and disposable spirituality. Women are mere words on the screen that follow a prompt to reveal an intimate detail of their lives. They’re not embodied human beings.

The hashtag movement made a mistake in putting sexual harassment on the same level as rape. By doing this, we have no idea which woman was raped and which simply experienced some guy catcalling her. The culture quickly falls into a state where everything is trauma or a trigger.

By blurring the lines between each event—sexual harassment and rape—the hashtag movement accomplishes precisely the opposite of what it intends. A woman who’s been raped is forced to remain silent and unspecific because her experience has been submerged into the larger category that only deals in numbers and not real people.

A raped woman experiences confusion and endures years and years of shame and guilt. The healing and an exit out of the toxic prison of attack is long and arduous. If the intent of the hashtag movement is to give her a voice, then it has spectacularly failed because it’s made here a statistic rather than recognizing her individual voice and humanity.

The #MeToo movement has also done something not entirely unfamiliar to the virtual world—it has imposed on the women a manufactured vulnerability. Authentic vulnerability can only happen in a dialogue, in a face-to-face relation, when we know that we’re safe and that the person who’s in front of us is a friend, someone we can trust.

Voicing a past pain and an assault on the body, the mind, and the soul is crucial for any woman (or man) who has been abused. But to voice the past hurts, we must acknowledge that such an act must always involve some understanding of spiritual life.

The #MeToo peddles false and transient spirituality, and a “drive-thru” healing. Its revelation and redemption lasts the same amount time it takes for a Twitter newsfeed to refresh. Once you’ve typed the hashtag, your past suffering depends upon the amount of “likes” and “re-tweets.” But after these two words are typed, the openness and vulnerability is forgotten because the individual pain has been quantified. As if rape and sexual assault can be summarized with two words and subsumed by a collective and false solidarity.

Our private and intimate lives ought not to be lived so publicly. For every woman who has endured sexual abuse and who’s been raped, the path toward healing and living again is full of thorns. The stain of evil is always there.  But it is love—true and authentic love, desire and pleasure that’s stronger than any act of rape.