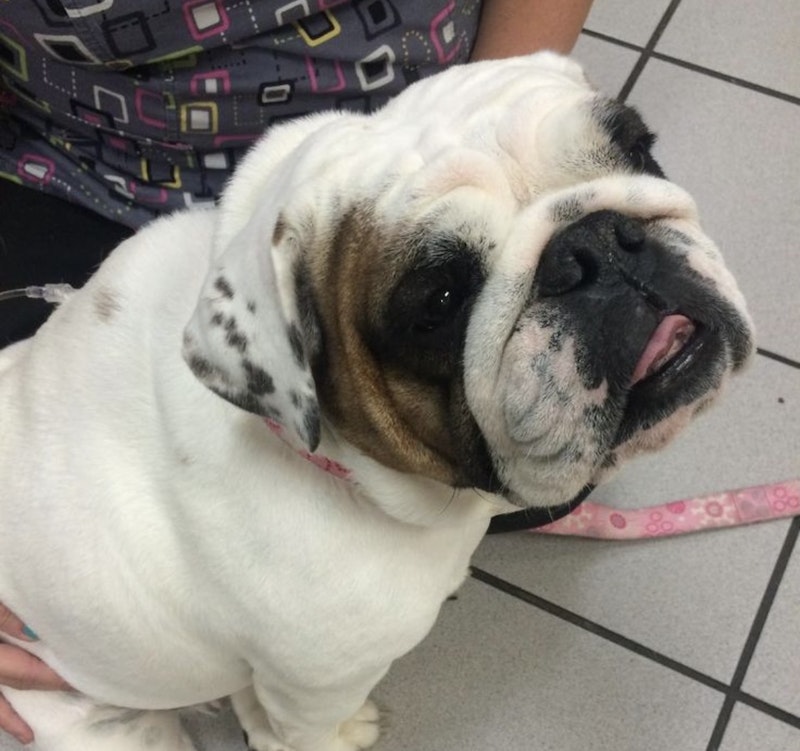 When Geraldina was a tiny puppy, she and two of her French bulldog sisters were discovered behind a dumpster, near a Greek restaurant that Lawrence happened to frequent. They’d been rescued and brought to a nearby shelter. Her two sisters were healthier and more sociable. They were adopted first.

It was 13 years ago that Lawrence stumbled into the shelter, having just eaten a cannabis-infused peanut butter cup. The teenage shelter employee steered Lawrence toward Geraldina. She was shivering in the corner of her little cell, on a skimpy pink mat. Lawrence’s girlfriend Sophie had just walked out, after two tumultuous but important years—at least for Lawrence. She left him a two-sentence note on the back of an envelope, “This used to be fun when you had your shit together. I’ll miss you.”

Two weeks later, Lawrence brought Geraldina home. Without knowing it, she enabled him to get his shit together. He got a temp job with an art supply company. Eventually it became permanent. When the economy collapsed, he survived the layoffs thanks to his flexibility within the company—sometimes he did deliveries, at times he cashiered in the store, but mostly he worked in the back office, dealing with inventory. Over time, he ended up finding a bigger place in a less-desirable neighborhood.

He stopped dating and—for a while—stopped getting high. The pay was mediocre but enough. The manager let him bring Geraldina in, which made everyone happy. She snored away most of the day, letting out an occasional toot.

It was a few years back that Geraldina started having problems eating. At first, she’d leave half of her dinner in the dish. Then, she didn’t come near the bowl. He brought her to the clinic. That’s where he met Mickey.

A Vietnam vet, as well as a licensed veterinarian, Mickey had one long brown braid down his back, and a neatly-trimmed beard. Lawrence didn’t enjoy the company of many people, but he and Mickey hit it off and spent time at each other’s places. Mickey lived alone, mostly reading and watching silent films in his spare time. Mickey’s flashbacks were infrequent, but terrifying nonetheless. Once, Lawrence had held Mickey in his arms all night. They only ever smoked pot or drank together, usually while watching a silent film. It turned out that a bomb going off in the film had triggered Mickey’s memory of the explosions he’d witnessed as a 19-year-old in the jungle.

Geraldina’s appetite improved with the medication, but the pills were still hard for her to get down. Lawrence dealt with her pills for a couple of years. Mashing them up. Putting them in applesauce, pumpkin puree or peanut butter. Now, at 13, Geraldina was wheezing more than usual and her gas was out of control. Lawrence was completely unprepared for the end, just as he’d been completely unprepared for the beginning.

On that Tuesday morning, when they entered the waiting room for Geraldina’s bi-monthly check-up, Lawrence sense something was off. The receptionist said they hadn’t heard from Mickey since last week. It was unusual. They’d had to bring in another vet and juggle appointments. Geraldina was suspicious of this replacement vet. Lawrence didn’t trust her either. Geraldina was half this woman’s age. They got the prescription refilled. Back in the car, Lawrence called Mickey. No answer, so Lawrence left a message.

Mickey called back a couple of hours later.

Mickey was out of breath. A parrot squawked in the background.

“Where are you, buddy? Just left the clinic.” Lawrence asked.

“Yeah, she’s okay. Didn’t like your replacement much. Young and chipper.”

“Oh, yeah, hard to replace the ancient wisdom of fossils like me.”

The parrot in the background seemed to be getting angry.

“Where are you? I hear a cantankerous parrot.” Lawrence was perplexed.