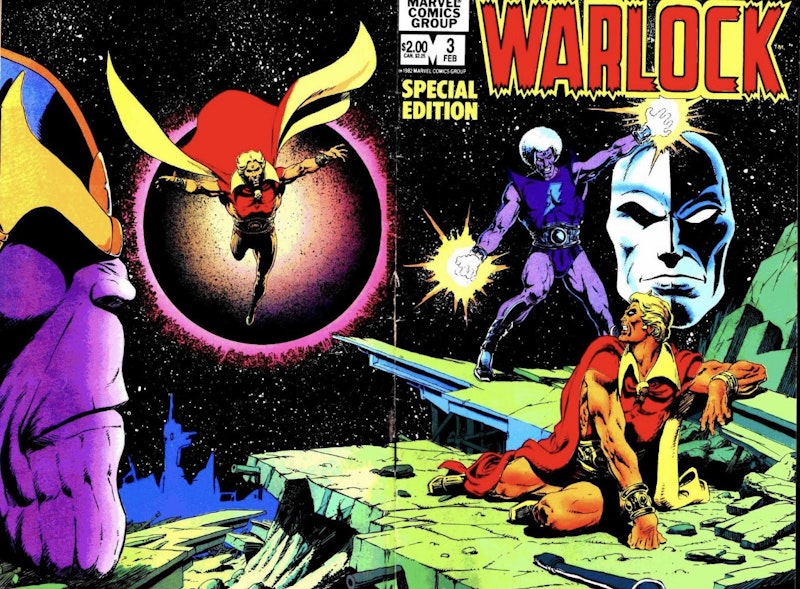 To fight or to protect? To defend or offend? To deflect or destroy? In each case, the answer hinges on infinite variables. These are choices that unleash reactionary furor, shock, and confusion. Comic book creator Jim Starlin’s cosmic sagas dramatize the union of peaceful resistance and self-defense. Morality and distorted perception clash in these intergalactic conflicts. The creator's transgressive parables revolve around the dangerous omnipotence and maniacal vision quests that leave reality shaken.

Starlin’s most celebrated 1970s protagonists were Captain Mar-Vell and Adam Warlock. The simple merits of both characters are often debated (i.e., “who would win in a fight? which one had a better costume? who should get a revival?”) while their subtle differences remain obscure. Mar-Vell was a career military man forced into un-traditional confrontations with death. Warlock was a synthetic being who rebelled against the power-mad ways of his human inventors. By identifying what ideologies motivate each character we witness distinct, divergent patterns of behavior and vulnerability.

When Adam Warlock first appeared in Marvel Comics’ Fantastic Four 67 he was simply known as “Him.” At this point the character was an experimental life form cooked up by the rogue scientists of The Enclave*. Hard-wired with god-like cosmic awareness, Warlock’s levels of power dwarfed those of any other super being in the Marvel Universe. When he emerges from a synthetic energy cocoon he’s a mature adult—a hyper-sensitive Adonis with golden skin, blond hair, and an existential chip on his shoulder. Once this mutant empath/asexual Rocky Horror discovers that The Enclave plan to weaponize him for selfish ends, he’s enraged and vows to destroy his creators. On FF 67 's final page, the identity crisis that will haunt the character throughout his life is summarized as Warlock makes the first of many ominous declarations: “…Someday a half remembered legend may tell of the time … a cocoon burst open… proving in one cataclysmic moment… that the CHILD is father to the MAN.”

Five years later Warlock’s power became greater than ever in Marvel Premiere no. 1 where he has a fateful encounter with The High Evolutionary. By this point the character had become a star spanning transient and was still known as “Him.” The ever-poetic Evolutionary gives “Him” the name Adam Warlock and an enchanted jewel in a failed attempt to turn the super outcast into his sidekick. The High Evolutionary’s gift is far more than a fashion statement; it’s a soul gem, a stone that draws people’s souls into a nebulous spiritual dimension beyond time. When The Evolutionary melds the jewel onto to Warlock's forehead Warlock’s mind becomes a realm of lost souls and all memories and experiences attached to them.

Two years on Jim Starlin revamped Warlock with “Who Is Adam Warlock?”, an anti-religious story in Strange Tales 178. It details Adam’s first confrontation with The Magus, an arch nemesis/cult leader who embodies the darkest elements of sub-consciousness. The issue concludes with a monologue that finds Warlock foreshadowing his own self-destruction: “How does one defeat… without destroying…? Tis madness to go on, yet if I cease the struggle, madness shall surely prevail! The Magus must be stopped and only I can do so… no matter what the cost.”

Adam Warlock’s inevitable suicide was a mercy killing. The mass life essence thrashing around within his soul gem is a trauma-blasted relic of his many battles with The Magus, Thanos, and other mortal enemies. It sets Warlock off on a fast track to schizophrenia. Mental illness and omnipotent soul-sucking power form an apocalyptic combo. To save humanity and to destroy the power dynamics that cursed his life from day one, Warlock chooses to kill himself as an expression of love for all worlds and all realms of being. Avengers Annual 7 (the comic that capped the Starlin saga which began in Strange Tales 178) depicts this as a solemn event tempered with tranquility. A passionate dedication to non-violence brought Warlock to a peaceful fate and a reprieve from the soul gem’s psychotic oppression. The unconventional method of his suicide destroys the soul gem’s threat while giving Warlock jubilance and decompression in an afterlife of his own making. It’s an extreme act of relaxation that brings the freedom and safety more often reaped as rewards for struggle.