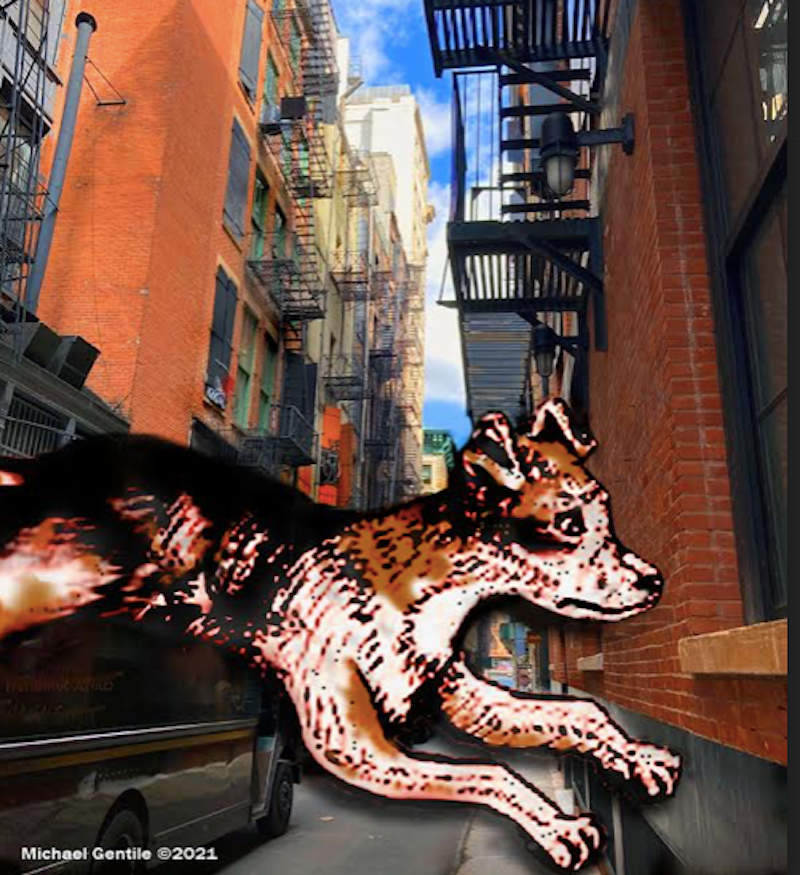 One late-afternoon September day, turning a corner onto Broadway, I was met with a pair of frightened eyes. There was such emotion in that look, I’ll never forget it. You could tell right away something was wrong, it was a lost dog.

“Have you ever seen this dog before? He was looking for something to eat.” Samantha was a state office employee who just got off work. “I live in Queens with my parents, I can’t take him home.”

“I’ve never seen him. He’s appears to be in good shape and has a collar,” I said.

I reached down and petted the shy animal, then sniffed my hand.

Samantha nodded her head, “I know.”

I must look like a dog person; maybe it’s because I’m walking a dog or that my former boss used to always call me an ‘old dog.’ Which is fine, I’ll wear the tag.

Minus the show tunes, we never know what kind of new theatrical experience is in store for us when I’m strolling down Broadway with my “dog” companion Keith Richards, he always leads the way.

Keef’s handsome. He’s a white Coton de Tulear and garners many compliments, especially after a fresh grooming. The “Royal Dog of Madagascar” breed’s similar to Bichon Frise or Maltese. Keef gets along well with smaller dogs, but big dogs scare him. On rare occasions, he’ll make an exception.

Rush-hour Broadway is brutal. People and noise coming from every direction. Traffic fills the streets with screeches and honks as bikes and scooters fly by. For better or for worse, it’s easier to just imagine the simpler times of The Vogues’ wall of sound on “Five O’ Clock World.”

It’s rare to see an unleashed dog on a New York City street; not a great place for a confused animal. Our lost fellow was an older, large male Labrador-Shepard mix with unique chocolate and white markings. The hound immediately came over when he saw Keef. They bonded and got butt friendly. Mercifully, there was no dry humping.

Then another person stops, obviously homeless, needing ears to listen chimes in with, “Ya’ll know, that’s what dogs do.”

In front of a coffee shop, Samantha and I talked lost dog strategies. A third person noticed our situation and offers help. Colleen was also a state office employee. She took out her cell and starts Googling.

The first call suggested was 911. No wait, this isn’t a life-threatening situation. Let’s try 311; the City wasn’t so helpful. Their advice was, “Take the animal to a shelter on the Upper East Side.”

I thought, “Well thanks. We’re all way downtown where the Dutch landed, practically Manhattan’s furthest point south at rush hour, nonetheless. How does that work?”

There’s a police station a few blocks away, maybe we could take him there. No, what if something terrible happened. The police might turn the dog over to Animal Control. Fearing the worst, they’d put rover down.

Our new friend kept a close eye. He was keen on reading faces. You could tell, this was one smart dog showing all-too-human characteristics while listening. As if on cue, he created a cuteness overload by plopping down right in the middle of sidewalk. The dog placed his chin on top of his crossed paws, turned his head ever so slightly and gave everyone a pouty “Now what?” look.

It’s safe to assume the dog had wandered along infamous Cortlandt Alley. Littered with trash, iron shutters and fire escapes, he made his way south. The dog would’ve passed the legendary punk rock Mudd Club on White St. Some doors along the alleyway lead upstairs to millionaires’ apartments. This narrow corridor of authentic, old New York ambience dates back to 1817. If Cortlandt Alley seems familiar, that’s because it’s been in so many movie, TV and video shoots; it’s “the” go-to New York alley filming location.

“Wait a minute, there’s an animal shelter on Centre St. with a great reputation,” I said.

Samantha made the call. They close at six p.m. “I can take him over to the shelter, it’s on the way to my subway stop,” she said.

“I have an extra leash,” I said and hurried Keef home.

Sunset spoke softly. Time was running out. Hopefully, our Good Samaritan efforts will pay off. Back on the street, I handed the leash to Samantha with a collective sigh. But the dog dug his paws into the sidewalk and started whimpering, not wanting to leave.  I coaxed him along as we walked together down the block.

As I headed back, I had to turn around for one last look. From a distance in perfect unison, the dog glanced over its shoulder with a heartbreaking “See you later” face. That night I couldn’t get the dog off my mind.

The next day, I dropped by the shelter to pick up the leash. I asked a helpful shelter staffer, “Do you know happened to the dog brought in last night?”

Well, it was good news. Our lost friend was back in good hands, reunited with its owner. When Samantha arrived at the shelter with the dog, the owner was already there waiting. The dog had wandered away from a nearby yoga studio on Broadway. The building’s back door was left open by an employee. Cortlandt Alley, of course, was where the curious canine started his caper. Now that’s September serendipity; sometimes dogs and people just find each other.