Life in the East Willie

Could a walled off ultra-rich future hit East Williamsburg? 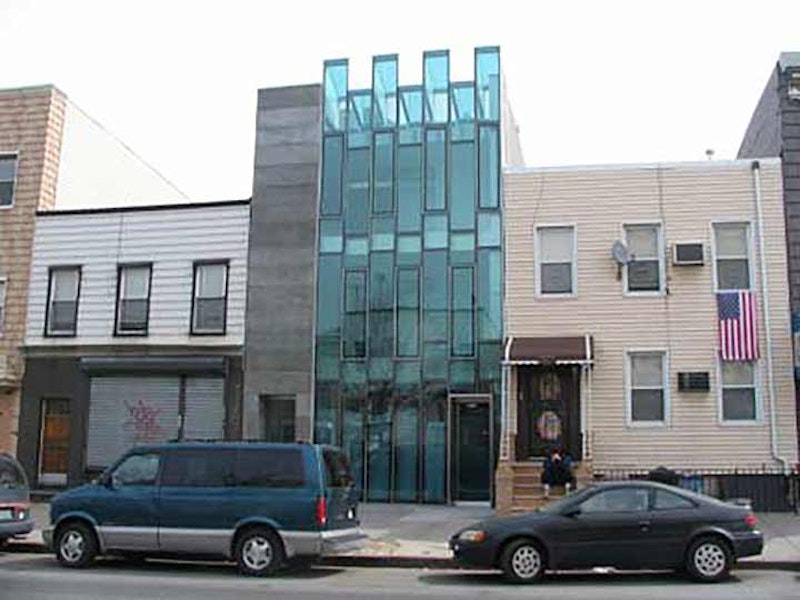 The region east of downtown Williamsburg is an intriguing amalgamation of abandoned, crumbling hospitals, dog-crap-littered parks, engaging architecture, and a burgeoning hi-rise condo center. Pressing further east and north there’s more of an industrial wasteland. Bear in mind that until the early-1990s, much of the western end of Williamsburg was much like this, before it got hip, and later just plain overpriced. Could that be the future for East Williamsburg?

I always thought Greenpoint and Williamsburg, at least before the influx of artists from the Lower East Side, were primarily Polish/East European and Latino. Here and there, though, there are demographic pockets that defy that overall description. A few blocks of Graham Ave. north and south of Metropolitan Ave. are primarily Italian. Here, Graham Ave. is subtitled Via Vespucci, named for the explorer (1451-1512) who voyaged to South America between 1499 and 1502 and established it as a continent. He was on the first European voyage to see the Amazon River. In 1507 a map of the New World was produced, naming the continent for his first name: Amerigo.

Glass fronts on new buildings have become trendy, which makes the building shown above on Graham near Skillman Ave. right in the middle of things. Its more prosaic neighbors on the left and right are sticking with aluminum siding for now. 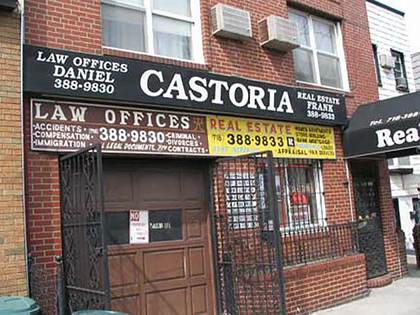 I’d suspect I’d be tossed out on my ear if I went into this law office and told everyone that, about 80 or 90 years ago, just about every other building in NYC was emblazoned with painted ads featuring ornate, elaborate script advertising Fletcher’s Castoria, a kiddie’s upset tummy remedy after too many green apples, presumably, since there wasn’t any Mister Softee in those days. It’s now called Fletcher’s Laxative. 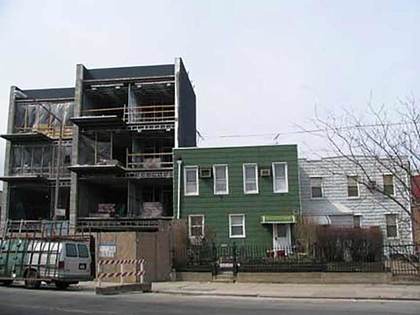 If you look at a map of East Williamsburg, there’s a road running from Maspeth and Bushwick Aves. curving northeast to Kingsland Ave. and Frost St. Known as Woodpoint Rd., it’s a short remnant of a much lengthier route that dates back to the colonial era—going back to the founding of Bushwick in the 1630s.

Woodpoint Rd. still runs on its original route for a few blocks here. South of Maspeth Ave., it was known as Bushwick Rd., today’s Bushwick Ave. It began at the the village of Bushwick, made an abrupt turn east, then north and northwest, to the head of Bushwick Creek, then known as Norman Kill. The creek extended as far east to what would become Driggs Ave. in McCarren Park in the 1600s. The road then turned further northwest and met the East River at about Commercial and West Sts. (perhaps “Greenpoint” and “Woodpoint” denoted the same region). By the 1800s, most of the road vanished as the grid system was laid out, except for the five-block stretch that’s extant today.

In the 1980s I’d use Woodpoint Rd. to get to my friend Brian’s house on North Henry St. Woodpoint Rd. is mutating with new condo developments and medical offices sprouting alongside the older, one- or two-story houses that formerly lined the road. 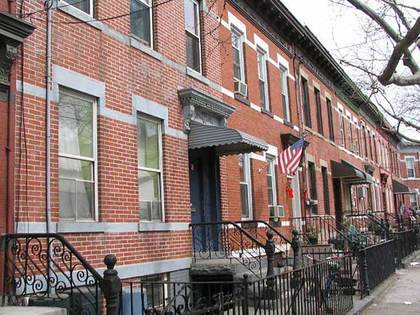 A Beadel Anthology: In the dictionary the word “beadle” is defined as a “minor official in an English church,” and I’ve seen the word used just once in print: in Dickens’ Oliver Twist, Mr. Bumble is a beadle who takes Oliver, nine, from the “baby farm” and puts him to work picking oakum at a workhouse. It’s there that Oliver requests of “the master” the infamous and outrageous inquiry, “Please sir, I want some more?” Perhaps whoever was naming Brooklyn streets in the 19th Century had read Oliver Twist, but somehow I doubt it.

Beadel St. is one of the few residential streets in the far eastern end of East Williamsburg, except for a couple of houses on Vandervoort Ave. Turns out that in the mid-1850s the Beadel family held large portions in the area where Beadel St. is now, and Peter Cooper, who also had holdings in the area including his glue factory, had two brothers who married into the Beadel family.

Beadel St. between Vandervoort and Porter Aves. is lined on both sides with handsome attached brick buildings. There are blocks that look like this in abundance throughout Brooklyn, Queens, and parts of the Bronx. But given its rather remote location, with the Williamsburg Industrial Park to its east and south, and the fact that similar blocks can’t be found on parallel streets, Beadel St. deserves protected status from the NYC Landmarks Preservation Commission. 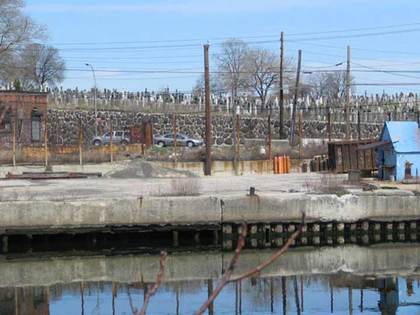 Like New Utrecht Ave., Meeker Ave., which runs northeast along the Brooklyn-Queens Expressway from Metropolitan Ave. and N. 6th St. northeast to Newtown Creek, is shadowed under an overpass for most of its route. However, after the BQE jogs east, Meeker Ave. is allowed to bask in the sunshine for about three blocks. There’s not much to see on it here, however, in this area dominated by low-rise industrial buildings.

Meeker Ave. is named for attorney Samuel Meeker (1820-1891) who drafted Williamsburg’s city charter in 1851; in four years Williamsburg would be annexed by the City of Brooklyn. Meeker also served as president of the fledgling Williamsburg(h) Savings Bank. Since Meeker Ave. turns up in maps from the 1850s, Meeker was given a lengthy avenue in his name when he was but in his 30s.

Meeker Ave. comes to a dead end at Newtown Creek, and even today, it’s somewhat illogical for a relatively major route to just peter out at the water’s edge. Just across the creek is Calvary Cemetery and two fairly busy roads, Review Ave. and Laurel Hill Blvd. in Blissville, Queens. Penny Bridge formerly connected Meeker Ave. in Brooklyn with Laurel Hill Blvd. in Queens. The bridge may have taken its name from a possible penny toll. Penny Bridge was replaced by the much more massive, auto-only Kosciusko Bridge in 1939, which in turn was replaced by a pair of cable-stayed spans in 2017 and 2019.

Through much of the 18th and 19th centuries, Penny Bridge was a toll bridge on the Bushwick & Newtown Turnpike (end of Meeker Ave). The toll was removed in 1878. In the 17th century, it was the location of a ferry between Laurel Hill/Maspeth and Greenpoint/Bushwick. The ferry was started by Humphrey Clay, an associate of Captain Kidd.

The bridge was also the main access to Catholic burials in Calvary Cemetery. “Penny Bridge” may also have come from the old practice of placing pennies on the eyes of the deceased, so they will remain closed. The Alsop farm was bought by the church in 1837 when land became scarce for burials in Manhattan. There was a need for the turnpike for the transport of Queens produce to and from Williamsburg ferries as well as the funeral processions to Calvary.

Until March 16, 1998 the LIRR stopped at Penny Bridge, three times daily. Trains had stopped at Penny Bridge since 1878; at one time it had busy Calvary Cemetery clientele. Stops at Haberman, Maspeth, Fresh Pond, Glendale and Richmond Hill were also abandoned. The trains stopped at Laurel Hill Blvd. within sight of the creek. In its latter days, the Penny Bridge station was nothing more than a clearing along the tracks; even in its salad days, it had merely a shed to protect passengers from the elements. 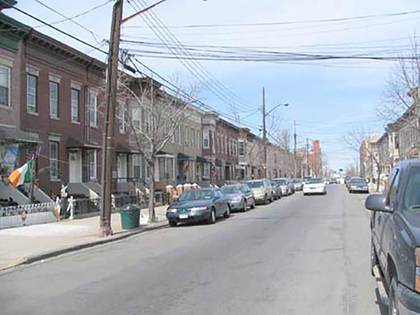 Apollo St. is the only Brooklyn street named for a Greek Olympian god (though Coney Island has its Neptune Ave.; Neptune was the Roman equivalent of Poseidon). Apollo kept his name when the Roman adopted the old-time Greek religion. I’ve no idea why this street would be named for an Olympian; it had received its name by the mid-19th Century, and perhaps Apollo was the name of a local business, or the name of an alderman’s dog. The most famous reference to the god in NYC is Harlem’s world-famous Apollo Theater.