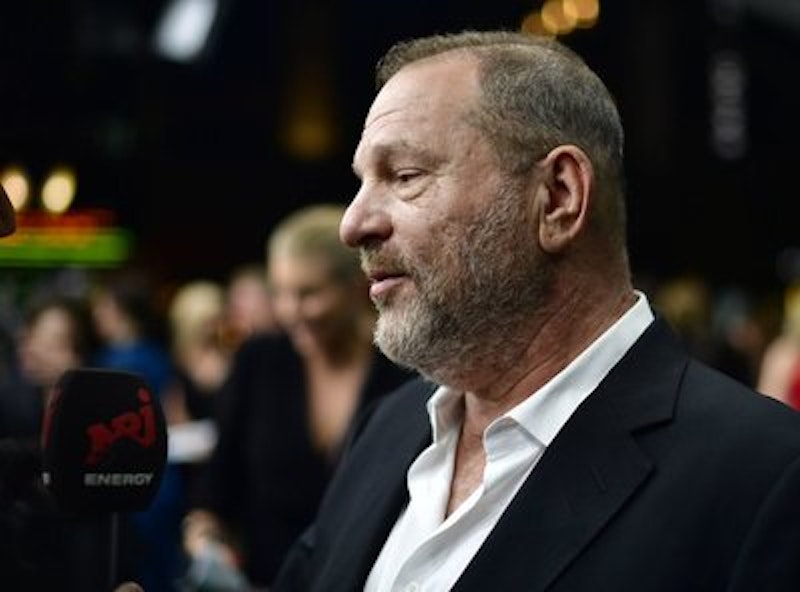 The Harvey Weinstein affair proves my point about the cultural power of the Jewish establishment. I’d call that establishment a “cabal” if it didn’t function so openly, with such arrogant contempt for the need to cover its tracks, and obscure its crimes.

Here was the monstrous Weinstein (the second of the Queens pimps currently fouling our news cycles), so confident in his tribe’s dominance of our cultural, legal, and economic establishments that he allegedly groped, sexually threatened, masturbated in front of, and even maybe raped dozens of gentile women. Some of them (Jolie and Paltrow, for instance) are powerful figures in their own rights. But gentile power these days is nothing compared to the power of the homo-Zionist cosmopolite-internationalist Davos-Sun Valley-Tel Aviv axis.

To arms, Noah Berlatsky! Pen another in your disingenuous tall-tales about the weakness and effeminacy of your ethnic clique! Go ahead, young man. I give you permission.

But you’ll do that whether I countenance it or not—because, given your allegiances, you must. The imperative will have been handed down from one of the global command posts of the New Class whose collective boot is on the world’s collective neck.

Yet know this: I’m not the only one who can see the truth, and who’s aware of who it is that has been controlling events in this degenerate America. Awareness is spreading. The dam has broken. Soon enough, I believe, the power of self-serving racial cliques will have had its day. No more will the Zionist perverts of Queens press their violating peckers up against the thighs of shiksa women.

L’affaire Weinstein gives me occasion, too, to meditate upon the canons of female beauty. These women upon whom Weinstein imposed himself are as a rule slender and willowy creatures, long-legged and narrow of waist. Their teeth are white and good, their hands soft, their hair and eyes lustrous.

In short, they embody the pornographic hothouse skin-and-bones feminine ideal of our decadent consumer society and its image-making apparatuses. A society that has been alienated from true value, from its rustic roots—from the land.

I find this feminine ideal repellent. There’s nothing about it that indicates a familiarity with brute labor, with honest agrarian toil. No, give me the real woman, as she used to exist in the American heartland. Or as she still exists in the industrial settlements of the Russian north—in a no-nonsense city dedicated to the extraction of nickel; a place insulated from Western contamination in the form of fashion magazines, upscale yoga, and emaciated lesbian pop stars.

Yes, give me that homely (and I mean “homely” in the best sense) woman. She’s short of leg, wide of hip; callused of hand and rough of skin; with a countenance that bespeaks grueling labor in spitting winter weather and under a blazing summer sun. Her teeth are perhaps browned and chipped. She’s obedient: She walks, as Saint Porfiry of Verkhnekazminskiy termed it in his mystical writings, at the “whore’s distance,” that is, “four arshins behind, in the shadow of her master”; a country wife, she’s familiar with (here is Saint Porfiry again) the “stench of bovine filth” and accustomed to “the chastisement of the axe-handle.”

It is this creature, whose name is TRUE WOMAN, to whom I would, in theory, pleasure myself with the aid of my palm—were I, in theory, to abuse in that way a body fashioned in the image of the Lord.

Meanwhile, our Russian Orthodox parish’s plans to publish a “glamour” calendar featuring the wives of prominent paleoconservative and alt-right thinkers will feature exactly such women. Of course, they will be contemporary versions of this type. Their splendid wide hips will be draped in flattering dungarees from L.L. Bean and Lands End. Their waddling splay feet will be strapped into attractive Teva sandals. Sensible bobbed haircuts will frame their gerbil faces—and on their noses will sit the “saucy librarian” eyeglasses that represent the only “racy” embellishment that the Benedict Option wife requires.