They both hate Pajama Boy. 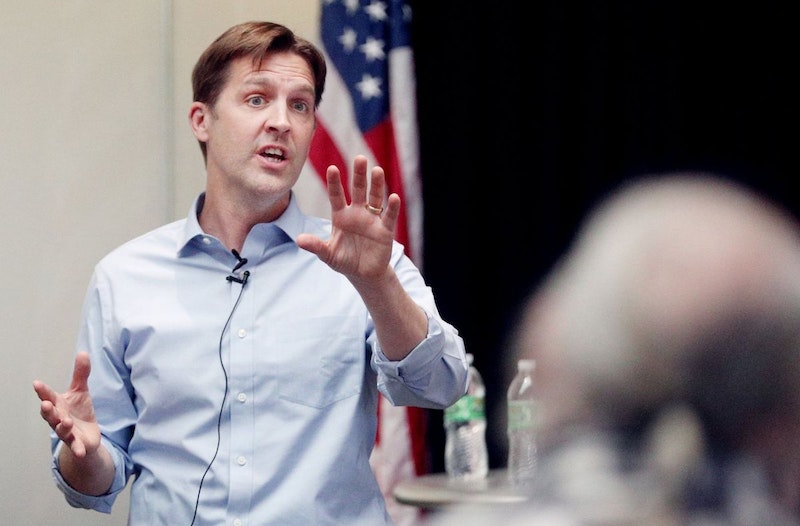 "We'll always have brown-shirt-pajama-boy Nazis like you," Nebraska Sen. Ben Sasse sneered at Richard Spencer in a tweetstorm last week. Spencer, creator of the term alt-right, is a neo-Nazi who has advocated for ethnic cleansing in the United States. As President Trump flirts with Nazi apologia, it's refreshing to see a Republican forthrightly repudiating racism and fascism.

There's one problem. The Pajama Boy that Sasse references is a right-wing meme that was in many ways an anti-Semitic dog whistle. To delegitimize Nazis, Sasse compares them to Jews. And while that comparison is undoubtedly inadvertent, it also indicates that the GOP has to do more to rid itself of fascism than simply tweet nasty things about Spencer.

Pajama Boy was the name the right gave to a guy with glasses and dark hair who appeared in Obamacare enrollment ads back in 2013. As I noted in Splice Today at the time, Pajama Boy looks a lot like me—which is to say, he looks stereotypically Jewish. The Forward reported that the actor is Ethan Krupp, who is in fact Jewish. And when conservatives called him "a metrosexual in a plaid onesie" and "an insufferable man-child" they were affirming stereotypes that link Jewish appearance to weakness and effeminacy.

Sasse's attack on Spencer echoes the attacks on Pajama Boy. Sasse does repudiate Spencer's ideology. He affirms universal rights, insists that all people are "the image-bearer of God," and contrasts conservative faith in individualism with Spencer's belief in the primacy of whiteness.

But right next to these principled arguments, Sasse includes jibes aimed at Spencer's manliness. Spencer is, again, a "brown-shirt-pajama-boy Nazi"—a term that denigrates Spencer for looking like a Jewish guy in an ad for the program of a black president. Sasse also calls Spencer and his fellow Nazis "lonely," and says, "Sometime after moving back into your parents' basement, you knock-off Nazis fell in love with reheated 20th century will-to-power garbage." Sasse is mocking Nietzsche's will-to-power, but when he tries to show that Spencer is awful, he does so by saying he's unsuccessful, childish, and (by not very subtle implication) a failure with women. Will-to-power is dumb, yet evil people are evil because they aren't successful enough.

Spencer, as it happens, is not living alone in his parents' basement. He's married. And, for that matter, lots of people who live with their parents don't revere Hitler. They just don't have the money to get a place of their own.

Sasse in his tweets creates an image of Nazis as weak people who don't work, are sexual failures, and are, not coincidentally, associated with those un-American groups, Jews and black people. "Get a real job, Clown" Sasse says, painting Spencer as a lazy grifter, like all those welfare cheats. For Sasse, real Americans are virile, hard-working, healthy, hetero folks, with wives and two-car garages.

Sasse is stigmatizing Spencer in much the same way that Nazis like Spencer stigmatize the people they dislike. Nazis sneer at Jews as being weak and unmanly. Sasse turns that around and says that Spencer is weak and unmanly, because he's like Pajama Boy, who is, not coincidentally, a Jew.

Rejecting Nazism is good. But to say, "Nazis are bad because they are weak and unmanly like Jewish people" isn't exactly rejecting Nazism. Sasse wants to show that mainstream Republicans do not worship power and race. But instead he demonstrates that mainstream Republicans see virtue in terms of success, power, and manliness, just as Nazis do. Racist dog whistles are so embedded in Republican party messaging that politicians emit them, helplessly, even when sincerely attempting to denounce racism. Sasse is trying to do the right thing. But his tweets show just how far the GOP has to go to disentangle itself from Spencer and what he represents.