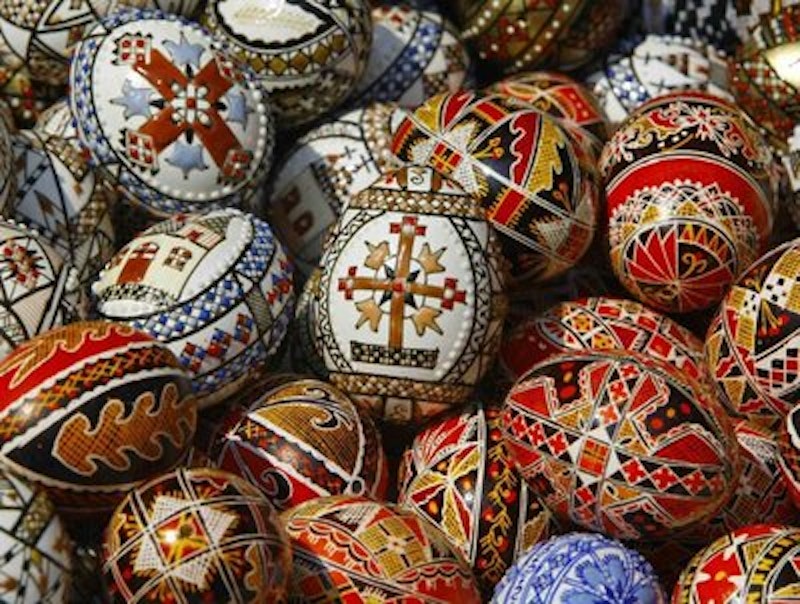 Easter, the venerable PASCHA, has come and gone.

Here in Indiana, our Benedict Option clan celebrated this most holy of days in our unpretentious fashion. Mother and Sister Marie attended to the Pascha feast, which broke the fast we’d all followed since Shrovetide. It was fine to see the women toiling at the hearth, just as it had been fine to see them labor in conformity with their holy duty on the preceding Thursday—Clean Thursday, as the Great Russians call it, because it’s the day allotted for a thorough spring cleaning.

Thus, on that day, did Mother and Marie exert themselves in promoting a purity most pleasing to the Logos: mucking the filth out of the ruminants’ stalls, scraping the excess filth off the strips of offal laid out to dry in the sun, carting heaps of gravel with which to fix the damage that winter did to our dirt access road, “sweetening” our outhouses with generous shovels-full of lime.

As the women worked, Brother Aiden and I conversed on the porch. We spoke of such pleasant (if profane) matters as the dawning baseball season. Not the professional season—we abhor the Semitic commercialism of “big league” sports—but the local high school season, which Aiden and I follow closely.

On his smartphone, Aiden produced photographs of one of our local school’s brightest “prospects”—a precocious freshman shortstop, towheaded, with a hint of down on his upper lip and slender, well-formed calves. Some of the photographs were Gavin’s own, snapped when he lurked around the edges of the team’s practice; but Aiden culled some from the Web as well (the comely shortstop maintains a presence at that exhibitionist Gomorrah known as Instagram). But there we were, two patriarchs and connoisseurs, communing over the majesty of Baseball, and Youth, and Beauty, and Spring. A fine day, that Thursday—and our property was a bit cleaner at the end of it.

I’ll say little of Good Friday, as Daughter’s behavior made it something less than good, and necessitated discipline.

But the afternoon of Pascha was enjoyable. Father Nicodemus blessed us with his presence at dinner, enlivening the proceedings with his cackle and charming way of licking around the outside of his bearded mouth after devouring, with gusto, chunks of lamb and cups of homemade wine. Daughter objected only weakly when she was chosen to perform the ritual Pascha washing of the priestly feet.

The conversation was light and witty. It ranged from more speculation about the rumor, still completely unsubstantiated but everywhere along the Russian Orthodox grapevine, that Professor Daniel Larison, the Taki’s Magazine columnist and learned and multi-lingual super-intellectual, is soon to be named to a full professorship of Old Slavonic philology and Orthodox theology at a leading university; to the fecundity of the recently ended birch juice season (glory to God!); to the relative qualities, in combination with groats, of various wild mushrooms.

Then came evening, and prayer on the porch, as the moon bathed our redeemed world in its light and the women scrubbed the iron-ware, the feed-tub, and the firedogs. A good day!

FOR HE HAS RISEN! KHRISTOS HAS CONQUERED DEATH ON OUR BEHALF.