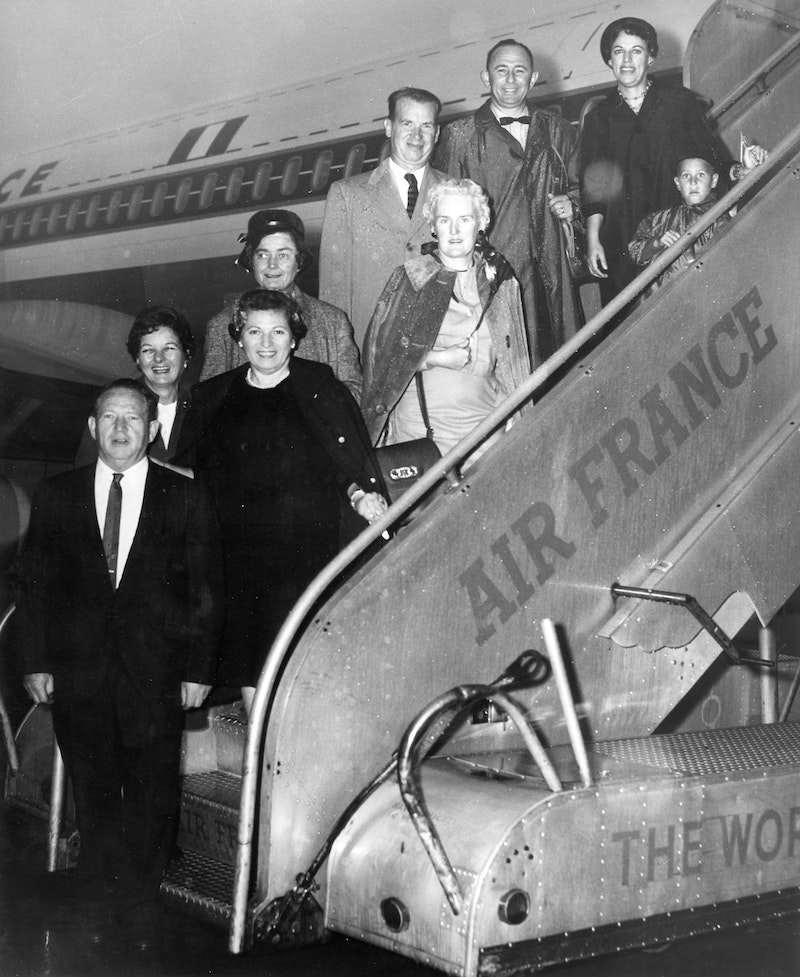 Technically, I’m not late to the United Airlines hoo-hah that occurred last week, and all the subsequent calls for boycotts on social media, since I’ve hated United since the late-1980s. You can go back and forth on whether the airline was guilty of just a bad response—and it was deplorable—or more nefarious business practices, but in the end, after the controversy dies down, people will still fly United’s stormy skies. I did get a kick out of United’s chairman Robert Milton’s ham-handed series of apologies, finally saying “the board” was “deeply sorry and upset.” (At least he didn’t say “super sorry,” but the Internet language of attaching “deeply” to “sorry” was galling enough; everything is “deeply” today, that lazy tic filtering from journalists to often-inarticulate businessmen.)

And a reminder: flying was once an occasion, as the photo above, around 1960, when my parents (third couple from the top) went to Europe, departing from Idlewild Airport, shows.

The reason any sustained boycott won’t work isn’t hard to figure out: flying has become such a monumental headache, with a lot fewer direct flights and less airlines to choose from, that sometimes you can’t avoid your hated carrier of choice (everyone has a number one, and they’re almost always US-based). Back in ’86 or ’87—and given the miserable condition of air travel today, that seems like a century ago—I was returning from Phoenix to Baltimore, with a stop at Chicago’s O’Hare and for some still inexplicable reason my connecting flight was either scotched or delayed. Translation: I cooled my heels at the airport for about 12 hours, a rarity in those days, and the dullards at United’s “courtesy” desk were apparently anticipating 21st century travel, for they were, to a person (I complained to the whole gamut of workers) rude and condescending. No vouchers, no upgrade to a passenger lounge, nothing beyond a cursory, “We’re sorry for your inconvenience sir,” with the implied “Now get the fuck out my face” rejoinder.

I promised myself then that I wouldn’t fly United any longer, and didn’t for at least 15 years. But after 9/11 all the rules changed: in addition to the TSA pat-downs, shedding your shoes and empty pockets rigmarole, the hard rule of getting to the airport two hours before “scheduled” departure time, and the mass switchover from travel agents to Internet do-it-yourself bookings, sometimes there are no options. For example, about a month ago, my family was taking a trip to Dublin and London and when I rang my travel agent—I still use one and why others don’t is a mystery: it costs nothing for the service and they’re more equipped to find the best possible deal—he said United was the only carrier with a direct flight to Dublin (and this was out of Dulles, a schlep from our Baltimore home) at a reasonable time. Yes, we could’ve flown another airline, but that flight was at 3:30 in the morning, so I reluctantly gave in to the dreaded United flight. Oh, we could’ve taken the cheaper alternative: a no-name airline that stopped in Iceland, with a five-hour layover, but I don’t trust anything to do with Iceland these days—not the splendid country, but all the reported snafus with travelers stranded for a full day, luggage gone to Caracas or Vancouver, so that was out.

Aside from a shaky, hold-your-breath departure—not United’s fault, it was snowing hard and the plane required a de-icing process that took an hour—we lucked out this time and actually arrived in Dublin early. (It kills me when the pilot plays along with the carrier’s deception of arrival time, as if any seasoned traveler doesn’t know that all sorts of variables are factored in.)

The last United scrape our family endured was two years ago on the West Coast: a botched take-off from Seattle to San Francisco left us in the lurch. My son Nicky described it:

“Everyone on our flight missed their connections. And then, after we all ran three gates over, the agents curtly told us it was too late to board, even though we saw the plane idling for another 20 minutes, still attached to the terminal. Oh well, a couple hours in San Francisco, better than Mobile, AL. But more bad news at customer service. Miss United took our case and bluntly said we’d be on another flight in 10 hours. Completely deadpan, as if being stranded is routine. After explaining that this was unacceptable, that we had to meet family in Santa Barbara, and had already missed some of them, she put us on standby on an oversold flight in two hours. Figuring it out on the spot, we figured renting a car and driving six hours made the most sense. We could still get our luggage back, and cancel the standby. In a scorned elementary school teacher’s tone, she said she’d go ahead and cancel our tickets home the next day. But wait, we’re flying U.S. Airways tomorrow, what does that have to do with United? “Oh, I’m sorry. Okay, you’re free to go.’”

The cliché for years now is that traveling by plane is like enduring “the Greyhound of the air.” But that’s not really true: Greyhound generally sucks (and I haven’t used that gruesome mode of transportation since I was a young man), but at least the bus company doesn’t put on a haughty front. It’s budget travel, they know it, and you can take it or leave it. I wish airlines would be so frank.